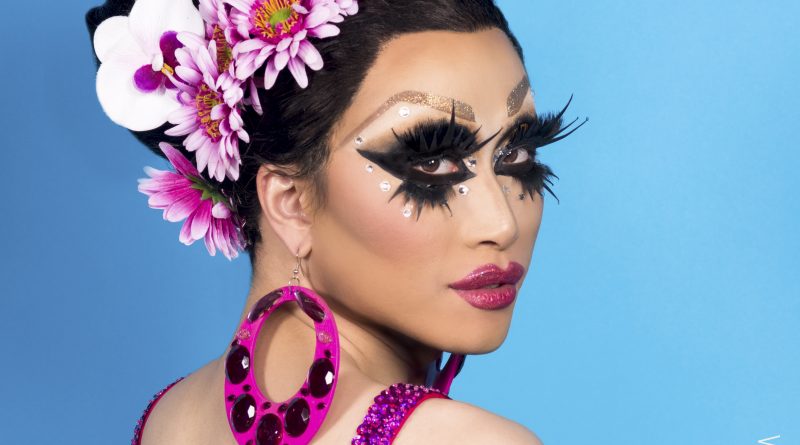 Drag Race is in the midst of it’s tenth season and is bigger than ever! In a season full of fierce queens, any slipup can send you home and unfortunately that’s what happened with fan favorite Yuhua Hamasaki. After being voted one of the most popular queens on the RuPaul’s Drag Race Reddit page, fans were shocked to see her leave so early in the competition. But armed with a couple rolls of caution tape, an ankh and some determination Yuhua is ready to take the world by storm. As she prepares for her May 6 performance at Beaux, Gloss sat down with the Yuhua to talk about the show, her New York sisters and her new music video.

First of all, congrats on your run on Drag Race. How’s your touring going so far?

It’s good! Very busy. I’m like in three to four different cities a week. It is something that wouldn’t have come along if it wasn’t for the show, so I’m very, very grateful for it. It’s been crazy, but at the same time it’s very rewarding. It’s been an amazing, amazing ride so far.

You were eliminated a couple weeks ago but I don’t know if you noticed but you’re still number three in the most requested flair for the RuPaul Reddit page.

Do you ever stalk the reddit page? What’s your thought on being that ultimate fan favorite?

I did make a lot of my own things. I also made a lot of things for other New York City queens as well. Coming to the competition, I just know that I can’t worry about other people. I can’t worry about sewing for other people, I just have to focus on myself. But if they need help and I am available, I’ll help them if I can. I just have to do me first.

Funnily enough, Miz Cracker said in one of her review videos that she asked you to make outfits for her last summer but you said you were too busy. Did that actually happen? You denied her outfits?

So were any of the other New York queens being on the show a surprise?

No, because always before everybody disappears to go into filming, there’s always speculation of who’s on and who’s not. Who’s leaving on a hiatus, who’s quitting their gigs and who’s having someone replace her shows. It’s always in the air of who is going to be on it. But the thing with me, I didn’t tell anybody until I was on the plane. Like, literally on the plane. I was texting my employers. I was like, “Sorry I had to go away. My grandfather just died and I have to go back to China. I won’t be there for a few weeks, but I will have someone replace me.” So I didn’t tell anybody at all.

Here’s how I see things, if you want to make something happen, you have to go for it. It’s up to you to make it happen. Other people are not going to make it happen for you. Same thing with Bob’s Purse First, it wasn’t a thing until she made it a thing. And also, Alaska’s Anus. She kept plugging it and plugging it and plugging it throughout All Stars 2 and then afterwards as well. So, if you want to make a brand for yourself, just go out there and do it. Same thing as when someone says, “Stop making a thing happen.” Well, I’m making money off of it, so why should I stop?

Are we going to be expecting you at DragCon this year?

Yes, I will be there!

Do you have any plans for your booth? Any sneak peek you can give us?

No, you have to come and find out! This is my first time doing it in LA and I cannot wait to see everyone. It’s going to be bigger and better than ever because it is season 10.

So you recently made your own version of the sponge dress and you recently auctioned it off to a LGBT center in New York. What made you want to do that?

(Laughs) As Michelle Visage said, I like to clap back! That was my clap back towards Monét X Change. She said I was just a seamstress, I wasn’t a designer. So I was like, hmmm, your sponge dress is ugly! So let me make a better version of it. So I clapped back at her with another sponge dress that I thought was better.

With your charity work, are there certain things that are close to your heart that you focus on and support?

So you just released a music video, for your single The Ankh Song. Can you give us a little behind the scenes on that?

Well, I’m not trying to be Beyoncé or Mariah Carey or Britney Spears. I made it out of fun. It’s basically me in the video talking about an ankh. An ankh is basically the symbol of life. It gives you life, liberty, happiness – that’s the meaning behind it. So I have like kids up there, telling you guys to buy it and you guys need it. Almost like a nursery rhyme where you’re watching Sesame Street where you have the grown up singing the song with the children singing along with you. It’s almost like an allegory on how society tries to brainwash you at such a young age to do certain things, to believe in certain things, to have certain values.

Should we expecting any other songs or music videos from you?

Amazing. And then one last question – the obligatory question for every RuGirl. Who are you rooting for this season?

I’m rooting for myself even though I got eliminated! Because I am what? Delusional!

Catch Yuhua Hamasaki at Beaux on May 6.