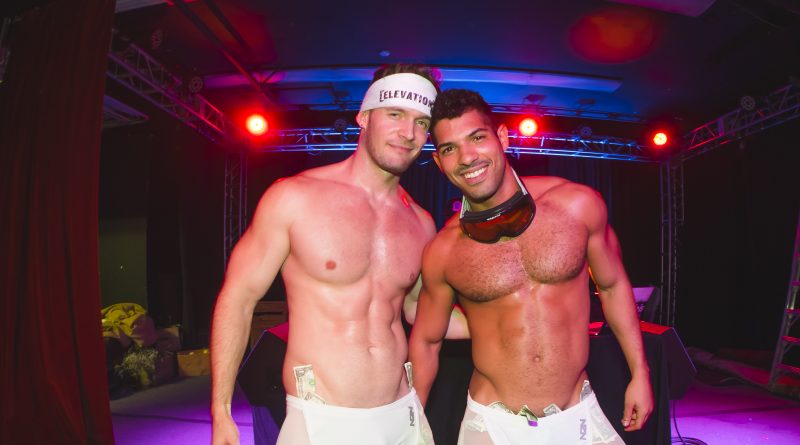 On The Cover
December 7, 2016 Gloss Magazine

OK, yeah, we get it, the weather in LA is perrrfect. You can shut up about it already. Just like the always-70-and-sunny forecast, you’re getting a little (dare I say it)… tedious. You know what I’m talking about.

That tedium is precisely the champagne problem that led Tom Whitman to head for the hills. A decade and a half ago, SoCal’s Duke of Debauchery hoped the horde of LA homos would take a hike… all the way to the top of Mammoth Mountain. Everyone loves a mountain top, so hike they did.

In the 15 years since Whitman first schemed up his 4-day ski soirée, Elevation Gay Ski Week has become the gold standard of gay getaways. Whitman’s special brand of bromo badassery gives us just the right mix of moguls, mingling, and mayhem. There are the big, splashy late-night bashes we anticipate every year (the Neon Blizzard), but Whitman always has a few surprises in store, too. Last year’s fan favorite “Onesies and Long Johns Apres Ski Party” is destined to become a staple with hundreds of hunky homos showing off a little fashion and a lot of leg in their sexiest winter onesies and long johns.

When I asked Whitman what new shenanigans he has planned for Elevation Mammoth’s 15th year, he refused to spoil the fun: “We have a few surprises in store, and I can’t tell you all of them.” I convinced him to spill one promising preview of what’s sure to be Elevation’s Mammoth’s biggest year yet: “for the first time ever, we are going to bring Elevation DJs onto the slopes during the day, so you can hear divas and big gay anthems while you’re snowboarding.”

If you’ve ever been to an Elevation event, you know Whitman has a roster of massive DJs talent. This year, those musical maestros will be slopeside to spin us into a sweat: DJ Josh Peace, The Perry Twins, DJ Blacklow, DJ Dawna Montell, and DJ Casey Alva.

Elevation Mammoth has come a long way from its humble beginnings as a fun getaway weekend with Whitman and a few friends. This March, over 2,500 guys from SoCal and across the country are expected to make the annual pilgrimage to Mammoth Lakes.

“I’m super excited about the 15th anniversary of Elevation Mammoth,” says Whitman. “It’s amazing because so many people who attend have been coming 5, 10 and even all 15 years.  It’s become part of the gay culture of Southern California, and an event can’t ask for anything better than that.”

Now entering its 7th year, the February Elevation event in Park City is hard on Mammoth’s heels with over 1000 guys and 7300 acres of perfect powder. The Elevation brand has developed such a cult following that diehards have begun listing both stops as “can’t miss” on their winter to-do lists.

Now, I know what you’re thinking: “Chad, this sounds so fun, but I don’t skiii…” OK, so take a lesson, brah. You might actually have more fun than the rest of us. Those off-season Australian ski instructors tend to be very… competent. Last year, several of my friends didn’t even buy lift tickets, but they all had a blast. You can always spend the afternoon browsing the shops in Mammoth Village, soaking in the hot tub, or exploring the snowshoe trails, then meet up with all the sporty shorties at the 10k Apres wearing your snazziest green Christmas Sweater (it’s Saint Patrick’s Day)!