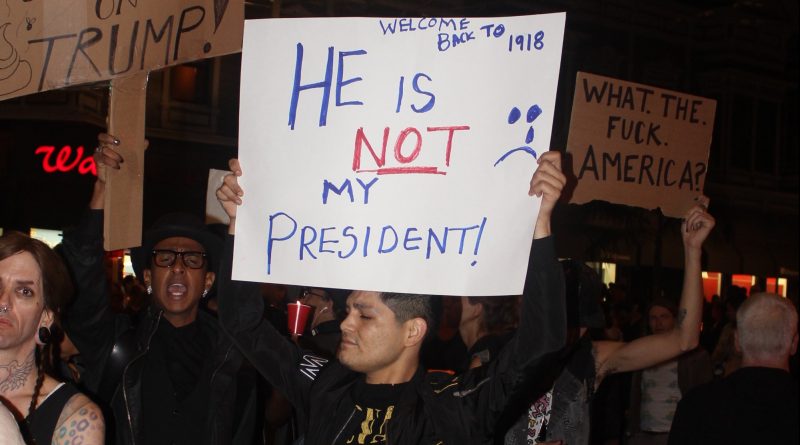 Despite winning the popular vote by almost 2 million individual votes, leading in all the poles this election year, and having the support of our current president Obama, several influential politicians, and even Beyoncé… Hillary Clinton shockingly lost the White House to reality TV star, questionable billionaire and known womanizer, Donald Trump.

This election proved several things, that the system of the Electoral College no longer serves its purpose, but above all it proved that we are a nation divided, and the future of the United States is very uncertain – especially for minorities such as Latin Americans, African Americans, the LGBTQ community, and women in these minorities.

In her concession speech, Clinton urged the nation to continue to “believe in America” and accept our president elect. She sent a message to millennials, who voted for her in record numbers, saying, “I’ve had successes and I’ve had set backs, sometimes really painful ones. Many of you are at the beginning of your professional, public and political careers. You will have setbacks too. This lose hurts, but please never stop believing that fighting for what’s right is worth it.”

All over the U.S. there have been protests & riots since the day after the election. Many remain hopeful that the Electoral College will vote with the popular vote and their collective consciences to bring forth a new day where one person counts for one vote. Others are hopeful that Trumps Trump University case will find him guilty of a felony later this month (case 6 years in the making is set for Nov. 28), rendering him unable to serve as president. In the latter scenario, however, Governor and now Trumps Vice President elect, Mike Pence would take the White House, which would undoubtedly be much worse.

Only once before in history has a member of the Electoral College voted against their states collective vote (back when Al Gore and George W. Jr. ran eight years ago). For this to work, 20 Electoral voters would have to vote against their state on December 19. If you are one of the many hoping for this result, you can sign the petition (4 million and growing) to the Electoral College to vote Clinton into the White House at Change.org.

But, should none of these potential outcomes come to fruition – and the seemingly inevitable happens… then what? What will that mean for our LGBTQ community and ‘our’ America?

WHAT PEOPLE ARE SAYING REGARDING THIS YEARS ELECTION RESULTS

Issued the following statement in regards to the November 8th Presidential Election: “In July, we placed a demand on Hillary Clinton and the Democratic National Committee. The reason being that we felt as though the party was not addressing the issues of Black America. The party has continuously taken the Black Vote for granted. Black Lives Matter Greater New York launched an initiative called “I AIN’T VOTING UNTIL BLACK LIVES MATTER.” Arrogantly, the Democrats ignored our demands, and continued to allow Blacks to be executed publicly by law enforcement. How much did they expect us to take before we revolted? Now they have lost complete control of the government. We are the Black Tea Party. Our votes no longer belong to any one party. We are launching the Black Lives Caucus to engage and educate black people on how to vote in their best interest. We are holding all politicians accountable and will replace any elected official that betrays our trust.”

“Keep fighting; keep working; keep pushing for all LGBT Americans, all Muslim Americans, all Americans with disabilities, all Latino Americans, all African-Americans, all white-black-brown working-class Americans struggling to have a fair shot at the American dream. And keep in the back of your head the words preached by the Rev. Dr. Martin Luther King Jr: “The arc of the moral universe is long, but it bends toward justice,”” Said Schumer. “Our country does change for the better, but not on its own. We worked hard for that progress, and we will expend every ounce of our ingenuity and effort to defend it.”

In a recent interview for Plus Magazine, the 33-year-old Empire star Jussie Smollett spoke with openly gay comedian Sampson McCormick about the current state of our nation after this years election.

“I think that these are desperate times, desperate, desperate, desperate people. I’m not saying that every single Donald Trump supporter is a desperate person. No, actually I am. I am, but [he is] playing to people’s fears, fears of being less powerful.” On those who oppose LGBT rights: “You only become a horrible person when you violate my basic human rights. That is when it becomes a problem, when you start being the aggressor in two consenting adults and the life that they live. That is what makes you an asshole. It’s this lack of understanding, it’s this lack of care.”

November being Transgender Awareness Month. Transgender woman, Lee Schubert, author of Woman Incognito released a statement regarding this years election results: “Moving forward, issues like employment discrimination, military service, and treatment in prisons remain a concern…” “But whatever direction court decisions and legislation may take, the real status of transsexuals in America will depend more on other people’s attitudes.”

Congratulations to State Senator Elect Scott Wiener! While he waited nearly a week to declare victory, Wiener was the clear victor and will do a great job representing San Francisco and the progressive values of his voters from one of the bluest districts in California.

Across the bay former Assemblywoman Nancy Skinner bested former Assemblyman Sandre Swanson.  Helped perhaps by the huge financial war chest Skinner had amassed prior to the campaign, her victory was decisive and the race demonstrated what a liberal democrat versus liberal democrat race could look like; positive, genteel candidates and their allies sending out mailers about the good their candidate’s body of legislative work and years of progressive activism has done to make California and the East Bay better.

But not in San Francisco! No, the Senate Race to replace Mark Leno was a feverish, vicious battle with both campaigns attacking each other’s record, with independent expenditures of more fervent attacks and distorting the records the candidates even more so.

I wrote about this in GLOSS’ Castro Street Fair addition in what allegedly both candidates have since referred to as the “Scumbag column” where yours truly suggested that both candidates demonstrate true “San Francisco values” and not attack each other, not subject the fair minded voters of SF to distortion of key votes for political purposes such as sensitive, nuanced votes on housing, homelessness and former Sheriff Mirakarmi’s reinstatement as Sheriff after admitting to a domestic violence, a charge his own wife wanted dropped.

Apparently, either my suggestion was naïve or elections with integrity were never actually “San Francisco values” but “East Bay values” after all. While the candidates have to ultimately answer to the voters about their campaigns, this race was barraged with independent expenditures.  As the former fundraiser for Equality California, I was nonplussed and very disappointed to see their PAC used by donors who never cared that much about EQCA or its candidates during our fight for marriage equality as they were supporting Scott Wiener as a means to attack Jane Kim.  In a close race, I thought it neither wise nor just for EQCA’s PAC to so ardently attack a candidate like Kim. Kim has long been an ally of LGBT rights which garnered her so much support from LGBT activists and electees.

I was equally surprised to see the Harvey Milk LGBT Democratic club sponsoring a story on Facebook by Toshio Meronek on a site called Truth-Out that they termed “A must read, brilliant article”…which likens Wiener to Ronald Reagan among other serious disconnects from reality. Seriously, Latrice Royale’s 5 Gs “Good God, Get a Gripe Gurl!” come to mind, Milk Club.

Scott Wiener received national prominence for directly attacking Fox News over their attempt to politicize the death of a SF tourist by the hands of a gunman who happened to be undocumented.  He was also the first politician to publicly disclose his use of Truvada and turn that disclosure into a call to have SF be the first municipality to pay for PReP treatment.  To then suggest he doesn’t care about people living with HIV/AIDS because they also might be included in those affected by the increased costs of living in SF is beyond ridiculous.

And while we’ve got 12 years before this State Senate seat opens up again to a truly competitive election, we have less than three years until the next mayor’s race.  Let us hope that by then, we will have learned from this election and our friends in the East Bay, and run campaigns that lift up strengths of the best of the candidates rather than spend millions of dollars in bare knuckle exploitations of the worst of the candidates.

OH, who am I kidding? This is San Francisco. Good God, Get a Gripe! And now onto the race to replace Scott Wiener as District 8 Supervisor!

THE VOTES ARE IN – LOOKING FORWARD

Though the presidential election seems to have absorbed much of the attention and energy of, well, everyone, there is a lot that did go well in the eyes of many Bay Area folks.

In fact there’s much to be proud of in California and in San Francisco for people who share progressive values.  Here’s a sampling of what passed:

In San Francisco proper, voters chose a bisexual woman and three out gay men for the SF City College board by returning incumbents Rafael Mandelman and Alex Randolph but also Tom Temprano and in very first place, Shanell Williams.

Oakland voters returned all of their incumbent council members to office.  The at-large council race we profiled largely turned out to be a dud as incumbent Rebecca Kaplan (the first out Lesbian to be elected to city council) trounced her competitors including out Lesbian and Obama/Hillary Clinton Northern California Political Director Peggy Moore 56% to 18%.  Several other competitors finished in the low single digits.

Surprisingly, three term out Berkeley City Council member Darryl Moore was defeated in a close election. If only the VIP members of Steamworks in his district, could have declared that their residency!

The City of Ikea, I mean, Emeryville, voted to elect out gay lawyer John Bauters to replace outgoing lesbian councilwoman Ruth Atkin. Bauters ran two years ago and came close in that election.

Out gay Richmond activist Cesar Zepeda (who we profiled last spring) hopes to see himself in that scenario.  Zepeda came close in his city council campaign on November 8th but fell short of election.  Zepeda told me he is already looking at the 2018 ballot!

“We did not come to fear the future. We came here to shape it.” -President Barack Obama