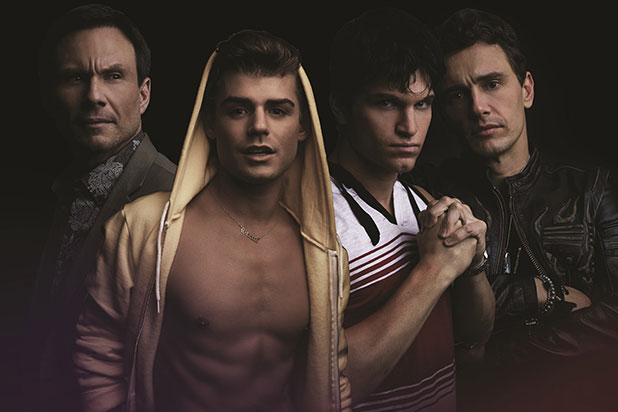 King Cobra, the film about the life of gay porn star Brent Corrigan (real name Sean Paul Lockhart) and the 2007 murder of Cobra Videos owner Bryan Kocis written and directed by Justin Kelly (I Am Michael) and starring James Franco, Christian Slater and Garrett Clayton, makes it’s San Francisco screening debut in the 2016 California Independent Film Festival (September 8-14) on September 10 at the Castro Theater at 9pm. There will be a VIP Pre-screening Reception at 7:30pm with the film’s screenwriter/director Kelly and star Clayton, the CAIFF Rising Star Award winner. Gloss visited with the King Cobra celebrities in a conversation about the film.

How close did you stay to the content in the book of the same story Cobra Killer by Andrew Stoner and Peter Conway? Justin Kelly: The book really served as more of a valuable guide of events and interviews, but we still had to sort of find the story and what the real angle is.

There have been some reports made in the media that the real Cobra Killer Joe Kerekes (portrayed by Franco) and porn star Brent Corrigan (portrayed by Clayton) say the film isn’t accurate. That is different from the response you received from the real subject of your other film I Am Michael, Michael Glatze, who liked that film. Justin Kelly: I actually went about (writing them) in the same way. We optioned the article about Michael Glatze to do I Am Michael. People get confused in thinking that Michael had creative control, but it was nothing like that. We also optioned the book Cobra Killer. I did meet with Sean Paul Lockhart (aka Brent Corrigan). He could have been involved at whatever extent he wanted, but he didn’t choose to be more involved because he’s writing a book that will be his version of the story. So, a lot of Information in the press is inaccurate. None of them, Sean, Joe Kerekes, Harlow Cuedra (Kocis murder co-conspirator), have seen the movie.

Garrett Clayton resembles Sean (Corrigan) so much physically. Having a fresh face from the Disney young star camp, was that a God-send for you, Justin, in a way? He sort of has that sense of innocence that Brent Corrigan brought to gay porn. Justin Kelly:  Gar rett was such a perfect fit. Aside from the look and fresh face, and because the role is a bit risqué, I needed someone who wasn’t afraid to “go there”. Even though the scenes are R-rated they are pretty intense. I could tell from the first meeting with Garrett that he wasn’t going to be afraid of the material and back away from the content.

Garrett, you portray a real living person in your role as Sean Paul Lockhart (Brent Corrigan) in King Cobra, but you didn’t have the real Lockhart as a consultant on this film. What did you do to prepare for the role for accuracy? Garrett Clayton: It was interesting. When I booked it and spoke to Justin (the director), he told me to take the role and make it my own so that if or when the real Sean watched the movie he wouldn’t feel like we were making fun of his life. I agreed with Justin on that point. So to prepare for the role I read up on the entire story through (the book) Cobra Killer, Wikipedia, and some other books. I also found YouTube videos Sean made when, I think, he wanted a channel on the site. I also looked up the (film) work he has done. Then, after studying him as much as possible without speaking to him I built the character from all of those (sources).

Playing a gay porn star is a far cry from your role in Disney’s “Teen Beach Movie”, from which you gained your notoriety. What, if any, reservations did you have before accepting the role of Corrigan? What convinced you to take on this project? Garrett Clayton:  Obviously, as I’m sure anyone would guess, it was very scary to take on a role like this when coming from Disney. When I first read the script I was VERY hesitant. But I saw a strong story with a powerful message, and I couldn’t ignore that. I (watched) some of Justin’s prior work so that I could understand what kind of subject matter he’d dealt with and how he’d handled it in the past. With, I Am Michael, I was pleasantly surprised at how smart and even-handed the film was. I loved that Justin told the facts of the story and let the audience come up with their own opinions. When I met with Justin, we discussed everything from the script, plot points, and our opinions about character development. Luckily, we saw eye to eye.

Having James Franco in this film is surely fabulous, but to also have Christian Slater (who plays Stephen, the Bryan Kocis, murdered Cobra Video owner, in the film) is like the film gods granting you the biggest wish ever. Was he always the one in mind for the part he plays? Justin Kelly:  We brainstormed who could play the Stephen character, and I had realized that Franco had recently worked with Christian Slater on The Adderall Diaries, a film Franco was in and produced. I thought Christian Slater would be perfect. Franco reached out to him and he agreed to do it.

Garrett, you play opposite some pretty big, established, and respected film industry names in King Cobra. Did you have to overcome any self-imposed intimidation doing this film with the likes of Christian Slater and James Franco? Garrett Clayton:  OF COURSE! Being such a big fan of Christian and James’ work, who wouldn’t be! To be honest, I always get nervous before doing anything, be it on stage or on screen. Just like any other project, I knew that if I focused on the work I could make it through, although the first day of filming was pretty scary! I was in nothing but this blue Speedo and a gold necklace that said “BRENT” on it. it was a very short scene but one in a bathroom where Christian had to slap my butt, tousle my hair, and call me beautiful before leaving the room. Funny enough, that was a scene that didn’t make it into the final cut of the movie.

Congratulations on earning CAIFF’s Rising Star Award, Garrett, from your acting efforts in King Cobra. What role do you think this film and this award will play in making the depth of your acting abilities known? Garrett Clayton:  Thank you! Well, I hope that people can see that I take my work very seriously and love what I do. It was a challenging role and one that has made me a better actor. I understand that I’m very fortunate as a young actor, and in getting to work so closely with Christian and James. It was also great to work with Justin. He communicates what he needs from actors so well. We spent so much time together every day on set. If he for a second saw me get in my head about some heavy material or an emotional scene, he wouldn’t hesitate to talk to me about it or to change any dialogue/direction to keep it fresh.

Garrett, what’s next for you? Garrett Clayton:  I spent my summer working on an exciting play called God Looked Away, starring Al Pacino and Judith Light.  And, I am starting rehearsals for HAIRSPRAY Live! for NBC soon! I’ve loved that show for a very long time, and couldn’t be more excited to be a part of it!

Justin, King Cobra marks the second project in a row that stars and is produced by James Franco. What’s next for this new filmmaking partnership? Justin Kelly:  We have announced a film in the works of the JT Leroy story (to star Franco, Kristen Stewart and Helena Bonham Carter). It is quite funny that I Am Michael, King Cobra and the JT Leroy story are all true stories that take place in the early 2000s that have to do with queer identity in terms of people crafting and changing who they are. Whether it’s with me or another filmmaker, I think James Franco will continue to explore his interest in queer cinema which is awesome.