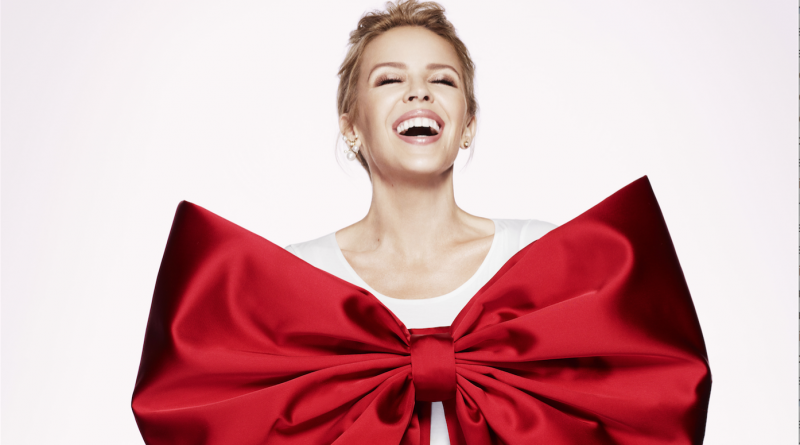 Interview By Chris Azzopardi | Photos by Will Baker.

How does Kylie Minogue make the yuletide gay? “By singing about it,” she says, giggling the cutest Kylie giggle. And then she does just that – she sings. The song? “It’s the Most Wonderful Time of the Year,” which the Aussie icon spontaneously launches into via phone, putting special emphasis on those “gay happy meetings.” Opening her first holiday album, Kylie Christmas, the frosty favorite is one of 13 songs bound to bring a little extra joy to the world. “Christmas is a fun time to be over the top, that’s for sure,” Minogue says, before stating what every gay man from here to the North Pole already knew: “I deal in glitter.”

First things first: Have you been naughty or nice this year?

Good question! I’d like to think I’ve been – how can I say this? (laughs) … the right percentage of both.

How about that time you writhed on a medicine ball during your video for “Sexercise”?

(Laughs) That was a little bit naughty. But a lot of nice. We want nice.

Hot! Over the years, my family has embraced Christmas more so in Australian fashion – we haven’t totally let go of European or British tradition, which most people have a link to in that there is still a roast – even if it’s roasting outside, there’s still a roast in the oven. But I would say, same as the rest of the world. Get up, open your presents, run around. Eat too much. The only difference is, we end up in our swimming suit, jumping in the pool, standing around a barbecue.

I like them both. They’re so different. I don’t remember when my first cold Christmas was, but that I found it very weird. People who’ve never had a hot Christmas – because most of the world associates Christmas with the cold – just cannot get their head around it. Even when we were recording, all the Brits are going, “Don’t you think its weird recording in June, July, and August? It’s summer.” I’m like, “Not really – makes sense to me.” I love it.

How did you make it feel like Christmas in the studio?

Basically we just decorated the studio. The studio was full of fairy lights and Santa hats and Christmas candles. We did not hold back.

Did you get dressed up for the occasion?

I went Christmas vibes – I didn’t go for full “sexy snow sleigh” album cover. We did have a sleigh in the studio. We had about five huge Christmas trees, giant crackers, toy soldiers and tinsel. Every day we were in there, it was more and more. It was really festive. It felt like Christmas. And I’m glad the world’s catching up – it’s been Christmas since June!

When it comes to presents: giving or getting?

Giving. I know it sounds cliché, but I love when you’ve got something for someone and they’re gonna understand your humor or get it, or it’s something they wouldn’t get for themselves. I especially like the wrapping.

Who are some of the gays in your life that you spend the holidays with?

There’s normally a few around. I mean, my Christmas is different every year. Last year I was in Los Angeles. I feel really odd answering this question… like numbering them! (Laughs) Let’s just say there’s a smattering. More sparkle!

What is the craziest Christmas gift you’ve ever received from a fan?

Oh, I don’t know. I can’t think of one. Nothing that alarmed me. Maybe this year will be different now that I’m Miss Christmas.

If you could kiss anyone under the mistletoe, who would it be?

Awww – that would be my boyfriend (actor Joshua Sasse), for sure! It will be our first Christmas together, so Christmas is even more special for me this year. I better order the mistletoe!

Get on that, Kylie.

Note to self: mistletoe.

What do you make of headlines that draw attention to the fact that he’s 20 years younger than you?

I understand it’s bound to happen because that’s a fact, but I just cannot express to you enough that it just doesn’t factor – it really doesn’t. I mean, I was surprised myself, but who you’re attracted to or who you fall in love with is beyond any kind of boxes that society puts you in.

And you know what, I hate boxes. I hate feeling that I’m restricted in any way, and definitely when it comes to love. You should love who you love. Of course there’s been those headlines, but people seem to also think that we look like we should be together, so it’s not been as bad as it could’ve been… let’s put it that way.

As a public figure, do you feel people are more prone to put you in a box?

Oh, definitely. I remember it happening from quite a young age, and it would drive me crazy. I started in TV as an actress and began singing, and they’re so sort of close-minded: You’re an actress, not a singer, and then I was known for singing and finally I am a singer and they don’t understand that I still act. That was definitely the first time that that kind of notion hit me, and it just made no sense to me whatsoever. In a broader sense, I hate being stuck in clothes, I hate being stuck in ideas. Maybe it’s being a Gemini – I need freedom! It’s like with the pony in the yard: If you close the gate, I will go wild; if you leave the gate wide open, I’m probably not going to leave. I just need to know that you’re not closing me in with anything physical or mental. It’s a very deep issue for me.
Christmastime evokes different emotions for different people. For you, what kind of emotions do the holidays trigger?

Excitement, then sheer panic because you think you’re ready but you’re not ready and then it all kind of creeps up on you. I think part of that panic is part of tradition, I guess. I would like to think this year I am officially ahead of the game. Also, wanting to be with family, if possible. And holiday – having a break. I would have to say one of the big pluses about a Christmas album is: At least I know when I’ll be finishing with promotion. December 25 I’m done! My work here is done!

How are some of these emotions presented on the album?

On the album, there’s the kind of toasty just-wanna-cuddle-and-wear-cashmere-sweaters vibe, which I didn’t have the last couple of years because I didn’t have a boyfriend, so that’s exciting. Then there’s the more emotional, bittersweet ones where you’re thinking about someone you love and you’re not with them, and I have that pretty much every year because I haven’t had a family Christmas in Australia for about six years and I’m not having one this year either. Then there’s the ones where everyone’s had a few drinks – Nana’s had a couple sherries – and everyone’s feeling very merry. Then its nap time, and you start again.

Earlier this year, and after releasing Kiss Me Once, you left your former management firm, Jay Z’s Roc Nation.

I was getting used to a new situation, and I loved it for all of those reasons. If I compare (Kiss Me Once) to making this album, it’s an unfair comparison. Within the confines of Christmas, you can’t do whatever you want – it’s a Christmas album – but I did learn some extremely valuable lessons through that, and my time there was well spent.

How will what you learned from that experience influence your approach to the next mainstream pop album you do? Assuming its pop…

Oh, it will be. I think when Christmas is done, the pop drug will come back… gosh, I mean, this album is pop-y anyway. But with Impossible Princess, I got that out of my system and then I did Light Years which had “Spinning Around,” and then to Fever, which was not quite as camp – it was more icy-pop. What I’m trying to say is that, after Kiss Me Once with Roc Nation, yes, I’ll do things differently, but I kind of do that after every album anyway. But I wouldn’t go around and work with so many people. I would try to be a little more streamlined. And I can say that because I did it and I learned a lot. Six of one, half dozen of the other.

When it comes to your career, your gay audience has been there every step of the way. It’s clear we have a special relationship. After all this time, how would you describe that relationship?

Strong. Genuine. Definitely funny at times. (Laughs) We get the same jokes, put it that way. And I never take it for granted. But you, for a long time, have been very loyal, and I feel like we’ve had a relationship for such a long time – and it’s a true relationship.