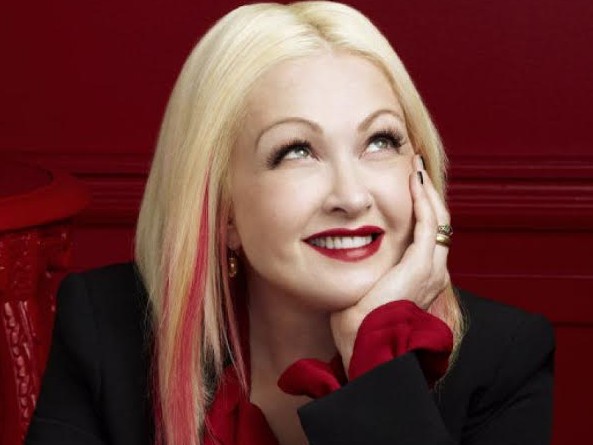 In America up to 40 percent of the homeless youth identify as LGBTQ, yet, only 7 percent of the overall youth population is LGBTQ. The outstanding reason for this disparity? Well it’s quite simple, many families of LGBTQ youth show rejection due the youth’s sex orientation or gender identity. Co-founder of the True Colors Fund Emmy, Grammy and Tony winning advocate Cyndi Lauper and the organization works hard to address the LGBTQ youth homelessness problem in many ways including raising public awareness, advocating within governments, and organizing communities to develop solutions to prevent and end LGBTQ youth homelessness problem. For the past 4 years, Lauper and the True Colors Fund has organized the Cyndi Lauper & Friends: Home for the Holidays benefit concert to raise awareness LGBTQ homelessness and funds to support the Fund’s programs. December 5 will mark the 5th time of this annual event and promises to be quite the concert at New York’s historic Beacon Theater with host Carson Kressley (RuPaul’s Drag Race, Queer Eye For the Straight Guy) and performances by Lauper, Boy George, Cam, Judy Gold, San Francisco Bay Area’s own Ledisi, Keb’ Mo’, Sharon Osbourne, Anne Steele, Valerie Simpson (Ashford & Simpson) and more. “I’m so grateful for the artists who will donate their time and talents this December in support of a cause we can’t ignore”, said Lauper about the benefit concert.

Cyndi Lauper was gracious enough to answer a few more questions for Gloss Magazine about the True Colors Fund and this year’s Cyndi Lauper & Friends: Home for the Holidays benefit concert:

BeBe: True Colors Fund has worked real hard over many years to reduce the homeless population amongst LGBTQ youth. What is that we must continue to do and what must we start doing to make bigger strides in reducing the number of homeless queer youth?

Cyndi Lauper: The biggest thing that we can do to reduce the number of LGBT youth experiencing homelessness is to focus on prevention. We need to start addressing the conflict in the home before a kid leaves or is kicked out by their parents. And, if a kid does become homeless, (we must) work to repair the relationship as soon as possible if it is safe to do so. That is why the True Colors Fund is partnering with the Federal Government to do a two-year initiative to test ways that we can actually prevent LGBT kids from becoming homeless. It is taking place in Houston and Cincinnati and the lessons we learn there will help other communities put in place the things that we know will work.

BeBe: Home For the Holidays ironically will be something many of the young people True Color Fund aims to help will not experience. What words of encouragement do you have for the LGBTQ youth out there who will not be “home” for the Holidays?

Cyndi Lauper: That there are people who are here to help you out. You do not have to deal with this alone. Reach out, please. If you do not know where to go, visit our website at www.truecolorsfund.org to find a list of places that we know are safe and inclusive for LGBT youth, from drop in centers to shelters to longer term housing programs. And if you just need someone to talk to, call the National Runaway Safeline at 1-800-Runaway, they are there to assist you as well.

BeBe: What is the emphasis of the 40 of the 40 list that will roll out in conjunction with this year’s Cyndi Lauper & Friends: Home for the Holidays concert?

Cyndi Lauper: The True Colors Fund is committed to creating opportunities for LGBT youth who have experienced homelessness to not only share their stories, but to share their thoughts and insights on how to end youth homelessness in America. They are the experts of their own experiences and it is our responsibility to make sure their voices are being heard. These are 40 incredible young people who have been nominated across the country because they have not only overcome the obstacles in their life, but want to make a difference in the world for other young people.

100 percent of the net proceeds from the 5th Annual Cyndi Lauper & Friends: Home for the Holidays benefit concert will go to the True Colors Fund. If you will be or have friends and family in the New York area on December 5, you can purchase tickets at Ticketmaster.com. Visit www.truecolorsfund.org/homefortheholidays for more information.

Martha Wash Keeps Giving of Her Voice in the AIDS Fight

With one of the most recognizable voices in the music industry, Martha Wash has not only given us music to dance to such as hits It’s Raining Men (The Weather Girls), Everybody, Everybody and Strike It Up (Black Box), Gonna Make You Sweat (C+C Music Factory), Carry On (solo), Keep Your Body Working and Free People ( with Tony Moran) and many more, but she has also given of her talent to help service agencies assisting people with HIV and AIDS. Once a part of the Two Tons O’ Fun backing Sylvester who passed away from complications caused by AIDS. Wash has been lending her voice to hundreds of AIDS benefits across the U.S. for over 30 years. She continues in such performing for the Richmond/Ermet benefit concert Help Is On The Way For The Holidays XIV with a great cast of other performers on December 7.

BeBe: It is kind of funny how when a fan of an artist listens to one of their favorite singers, they can forget how long that singer has been giving us such beautiful music continuously for so long. You are one those artists. It has been over three decades that you have been successfully doing your solo career. Did you ever think that you would be doing this for so long?

Martha Wash: I guess the years keep going by because I have never paid much attention to it. Time goes by so fast.

BeBe: But you are still going so strong. We can all look over the career of many artists and see where the decline, so to speak, began. But that hasn’t been the case with you.

Martha Wash: Well I have had my slow periods, but for the most part I have been able to work. That has been a blessing to be able to continue to work. The recording part of my career has slowed down though. But, I back at that again.

BeBe: You just had your seventh solo #1 Billboard Dance Club hit earlier this year with Free People single with Tony Moran. You have worked with many music producers with success with a variety of them. Is there any producer out there you would like to work with that you haven’t been able to do so as of yet?

Martha Wash: Producers, not necessarily. But artists, I would love to work with Aretha Franklin.

Martha Wash: I would agree!

BeBe: You are currently working with a couple of other legendary ladies of song, Linda Clifford and Evelyn Champagne King.

Martha Wash: We are somewhat of a group that has been put together called The First Ladies of Disco. We are promoting our single now, and hopefully, next year we will go on tour and work on more music together.

BeBe: Over you solo career, you have two full-length secular albums under your belt. But with such a big church background influence with Gospel music, as many women of color vocalist have, have you thought of dong a Gospel album? Maybe even urban Gospel Music?

Martha Wash: I did a (Gospel) single some years ago called You Lift Me Up which was more Gospel House. But, I would love to do a Gospel album.

BeBe: Did you have a Plan B if your music hadn’t taken off in the right direction for you?

Martha Wash: I had thought about being a teacher at one time many years ago when I was very young, but, I am not a teacher (material). It was a good thing I changed my mind really quickly. Teachers deserve combat pay!

BeBe: Even with your successes I your career with Grammy nominations and number one records as week talked, you did have some challenges with RCA and Sony in receiving just credit for material you had recorded with Black Box and C & C Music Factory. You successfully litigated to receive your credits and royalties. That really helped artists of today from not getting pushed out of their just acknowledgment for their work. Where does that achievement rank in all that you have done in your career?

Martha Wash: It is up there. I would not say it was number one or two, but the credit really belongs to my attorney. He was the one who argued the point of artists being credited if they are performing on a record. I’m happy for sure about that.

BeBe: Well after all that came to a head, it seemed we got a lot more Martha Wash.

Martha Wash: After things died down, RCA, who was the distributor for Black Box’s music in the U.S., came to me and wanted to sign me. That is how I made the first solo album (Martha Wash). It wasn’t what I was looking for, but they came to me.

BeBe: The Something Good album you did a couple of years ago was something a bit different for you. It was not the dance music we had grown accustomed of hearing from you.

Martha Wash: Jack Adams wrote most of the songs and produced the album. The first track that we did in making the album was I Got You, and we liked how well that it turned and the direction it went because it was different from the dance music that everyone knew me from. I wanted to do something different because I do the dance music standing on my head. I wanted to expand on my capabilities. It was well received, and I’m still promoting it after two years. That album can be played at any time for any reason because all the songs are really good. Plus doing a cover of Aerosmith’s Dream On for the album didn’t hurt either. That’s a great song.

BeBe: Your voice is so strong and you have such great projection have you thought of doing musicals theater?

Martha Wash: I did some theater well over 10 years ago. I did play called Love on Layaway. We didn’t finish the tour because we kind of got stuck in a blizzard. But, I really enjoyed the little time I did do it. I have gone on auditions for Broadway shows, and I still do it.

BeBe: You lost your close friend Sylvester, the Queen of Disco, to AIDS, and you ave given a lot of your talent in efforts to raise money and awareness in fighting the disease such as the concert for Richmond Ermet Aid Foundation Help Is On The Way For the Holidays XIV benefiting Larkin Street Youth Services, which is the only facility with an HIV/AIDS service center strictly dedicated to young people in San Francisco, and Aguilas on December 7 here in San Francisco.

Martha Wash: There are so many more people out there living with the disease and HIV than before. They are surviving and living with a good quality of life, much better than previous decade. But, the fight continues.

BeBe: I know you make your music for the world, but you have given so much to the LGBTQ community that we just love you, and I know, you reciprocate that back.

Martha Wash: I appreciate the (LGBTQ) community. They have been right there for me for over 30 years. They are my main fan base.

Martha Wash will be performing in the Help Is On The Way For The Holidays XIV for the Richmond/Ermet Aid Foundation with cast of many stars of stage, television, film and cabaret on December 7 at the Marines’ Memorial Theater. For ticket and event information visit www.reaf-sf.org/