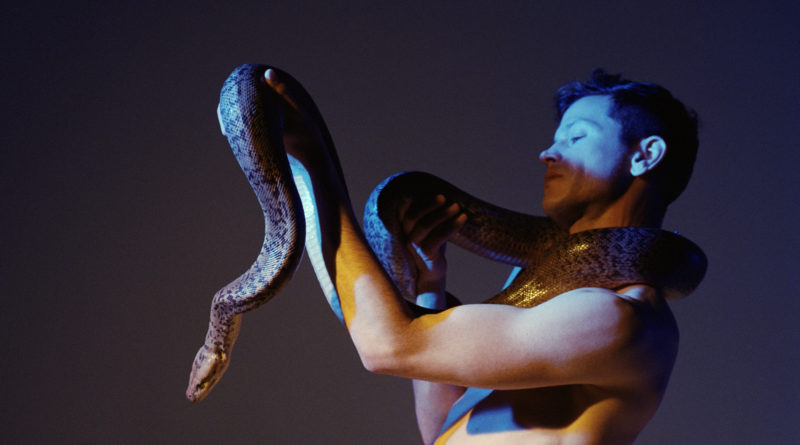 Perfume Genius on hitting the road, the band’s ‘utopian’ tour and his unique approach to creating music

Alone in the desert, three men, wearing nothing but thongs, move in cat-cow stretches on a blanket for nearly two minutes. Tour cities are read in a faint tone that, as the vintage video progresses, grows weirder and more chilling, the rhythm of the voice on beat with their bobbing bodies.

“Tour is only weeks away,” Mike Hadreas, 40, better known by his stage name Perfume Genius, writes in the caption under the video on his Instagram page. If that clip seems completely random, that’s because it is. It’s how Hadreas prefers to operate creatively, he tells me from his home in Los Angeles during a recent interview on Zoom. It is, perhaps, why the singer-songwriter has managed to evolve at a fairly rapid pace artistically, never settling for what is expected of him (though, he admits, he doesn’t mind answering to the pressure of his audience’s tastes) but mostly for what he expects from himself. Hadreas’ wandering artistic mind has yielded works as sonically disparate as “Put Your Back N 2 It,” his intimately produced 2012 sophomore album, a powerfully subdued work, and more recently, 2020’s “Set My Heart on Fire Immediately,” which, like his 2017 album “No Shape,” doesn’t just stroll but glides and struts.

His new album, officially announced a couple of weeks after we chatted, is called “Ugly Season,” music written as the accompaniment to Perfume Genius and choreographer Kate Wallich’s immersive dance piece, “The Sun Still Burns Here.” Hadreas’ long-time musical and romantic partner Alan Wyffels had a hand in creating the music, which Pitchfork describes as “the sound of dancefloor euphoria.”

As for the tour, “things are gonna happen,” Hadreas says. He’s referring to his emotions, which he expects to be in full swing on this tour, given it’s his first major trek since before the pandemic.

I’ve been reflecting on what music has meant to me the last couple of years, and “Set My Heart On Fire Immediately,” which came out just months into the pandemic, felt like such a gift during a really hard time. At that time, I listened to a lot of the music I listened to as a kid because nostalgic media of any kind was so comforting — even the nostalgic media that I consumed during some of my worst years as a gay teen.

I listened to the Alice Boman record that came out around the beginning. Her music is so understated. I don’t want to be dismissive of it because it’s really beautiful and powerful, but it’s understated. And it’s not trying to do anything to you. It just… it’s existing, and it’s really beautiful. I think maybe me and her grew up listening to the same music and being inspired by the same music. I hear a lot of ’50s ballads in the things that she makes.

What you’re talking about reminded me of listening to Cat Power, and when I was listening to Cat Power when I was 15 or 16, I was in a dark place. Like, very dark. [Laughs.] But I kind of like remembering it because I’ve had a million different incarnations of myself since then. And when I was depressed and a teenager, it felt so permanent. It felt [like] forever. It felt like the worst thing that’s ever happened to anyone. I don’t feel like that anymore. Maybe I feel a little closer to that the last couple years than I have since then, but it’s comforting to think back on those times and listen to the music that brought me comfort then and let me sort of indulge.

What does that feel like when people tell you that it’s your music that brings them that same kind of comfort?

I mean, that’s why I make it. I’m trying to make the kind of music that I had a relationship to in that way. But I also am soundtracking them getting through things. I’m not doing anything, really. You know what I mean? [Laughs.] I’m just sort of a companion while they do all the things that they’re doing. So sometimes that can get twisted in your head and sometimes that feels sort of like… 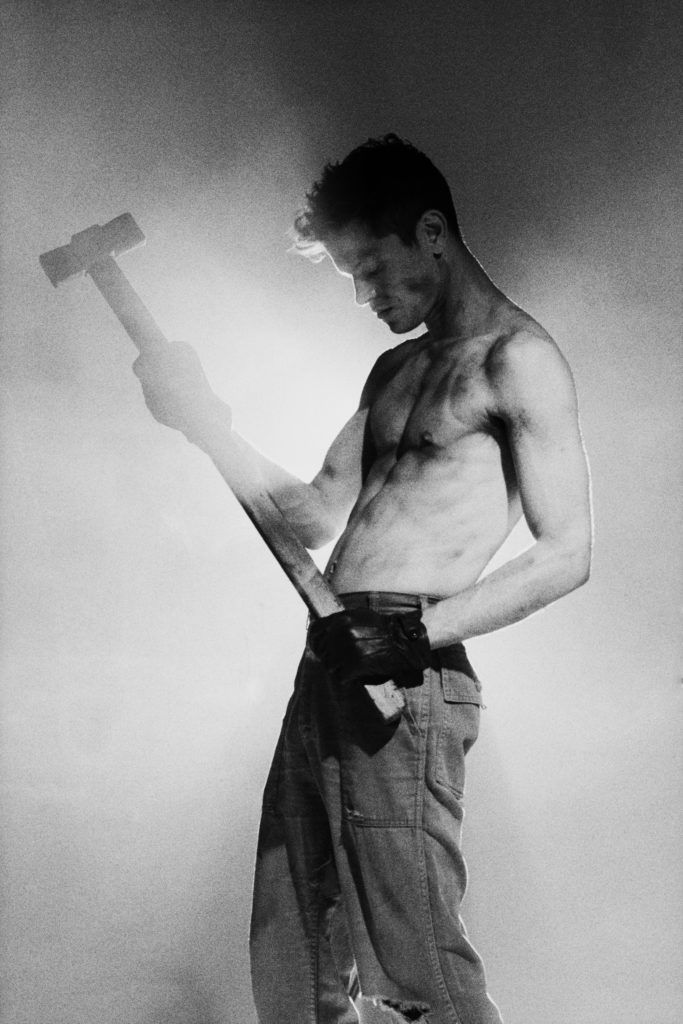 Like there’s pressure to make music for a particular kind of person instead of for yourself?

I don’t mind that. I like that pressure. I like having that as a rule. Just trying to make things that start as things that are helpful to me, but then I think, “How can I frame this, or how can I make this so that other people get how it’s making me feel, or what it’s bringing me through?”

I love the eerie, sexy teaser trailer for this that you posted on Instagram recently. It reminded me how much I love the way you connect to queer culture to develop your own artistic persona. So what was it about that clip of those thonged men that fell in line with what you want to do with this tour?

I mean, I don’t know. [Laughs.] I just was doing what I like. I was just playing around, was watching YouTube videos with the sound off, and then I saw that video and was like, “If I slowed this down or I put some intense music over it, it would turn it into something more unsettling.”

So then I started looking for that field recording and found all kinds of weird sounds and stuff like that, and then it just starts building onto it. Sometimes that’s my favorite way to make things — when I’m not thinking about what I’m doing. [Laughs.]

Has that always been your approach? And is that your approach to making music?
It’s this weird combo of being really hyper-analytical and really hyper-research-y. I’m very research-y when I’m writing lyrics or when I’m making things. I just gather a bunch of footage and images and read lots of Wikipedia pages; there’ll be some lyric that’s very simple, just like three words that are very normal, but I researched some weird ancient rite [to get there]. Which is pretentious, but it’s fun. Then the other side of it is just kind of trying to empty your brain, emptying everything to see what shows up. Those combinations of those two things is how I make everything.

Do you think that you’ll write at all while you’re on the road?
No, I’ve never really done that. Maybe if I play guitar then I could; I bet people are very glad that I don’t do that. But I can tell I’m gearing up to write. I just can feel that I’m ready to make something. I was feeling kind of a void there for a while and I don’t feel that anymore.

Looking ahead to your show, I’ve been thinking about how, because of the pandemic, I’ve really missed concerts but, even more so, I’ve missed sharing a space and moving bodies with a bunch of queers.

Oh yeah. We’ve done some shows, some smaller tours the last few months, and it feels completely different to me. I don’t know if it’s something in the air, or if it’s just my relationship to everything has changed, or maybe I feel a lot more vulnerable and maybe more present than I used to. So everything feels more emotional. Even just… not the shows, but just the touring with the band and everything, it just feels like summer camp. It feels very utopian. [Laughs.]

And then the shows: I’ve been doing rehearsals for them and I’m having to hold back during rehearsals because I’m going fully — destroying the set and everything like that. But we’re building it. I shouldn’t be destroying it. [Laughs.] I don’t want to, like, wreck my voice by going so hard in rehearsals. But I guess I really need it. The portal’s still very open.

What do you think is putting you in that emotional place?

Honestly, I just really need it right now. I haven’t really figured out a way, fully, to get what writing and making music and performing and all that stuff does for me. I haven’t figured out a way to do that otherwise. I mean, I’m not sure that there’s any [other] way. The thing that is very key to me is that it’s feeling. It’s a really physical feeling to me. And I have it when I’m writing. It’s just like a charge all around me, and it’s physical.

I miss it, not just as an idea, but my body misses it and I miss the feeling. And when I did the dance performance that I did with choreographer Kate Wallich’s dance company, I was having that feeling a lot in a really sustained way. And so I can do it. If I make a habit of it, I can turn on music and conjure something up in my body that feels very… not the same, but something. [Laughs.]

For some reason, the last couple years, I haven’t been writing. I haven’t been doing any self-care, really. It should be really heavy on my mind. But I don’t know. But I guess self-care, I’ve done enough ’cause I’m, like, here.

Do you like being on the road?
I do, especially lately. Maybe it’s just because every record we play, [we] kind of up it a little bit. I’m touring with a lighting person, which I’ve never done before, and so it makes the show feel a lot more cinematic, and I feel like it can stay in the dream longer.
The hard thing about touring is that it’s hard. [Laughs.] You’re tired and hungry, and you have to eat at the gas station. I figured out a way to do it. It feels a bit more sustainable now, and so I don’t feel like I have to push myself so hard to get into the space. And shows used to very much feel like I was going on stage, and there’s lights on me, and I just have to start slamming my head against the wall until a bunch of feelings come. You know? But now, I walk out and a light will bloom and I’m like, “OK, bitch.”

Chris Azzopardi is the Editorial Director of Pride Source Media Group and Q Syndicate, the national LGBTQ+ wire service. He has interviewed a multitude of superstars, including Cher, Meryl Streep, Mariah Carey and Beyoncé. His work has also appeared in The New York Times, Vanity Fair, GQ and Billboard. Reach him via Twitter @chrisazzopardi.