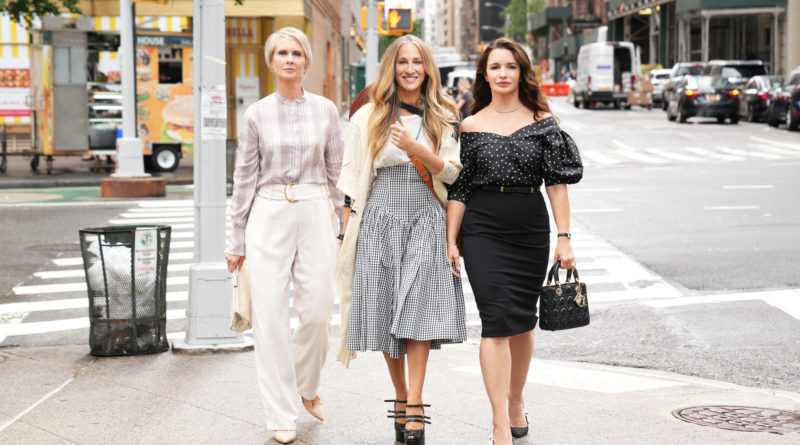 Pansexual “Good Girls” star Mae Whitman has a new series in the works now that that underappreciated comedy-crime series has come to an end. It’s called “Up Here” and it’s a musical, just in case you needed even more innately queer television in your life (note: you do). The series has some heavy-hitters on the creative side: “Dear Evan Hansen” writer Steven Levenson and Danielle Sanchez-Witzel (“The Carmichael Show”), with Thomas Kail (“Hamilton”) to direct and music from the “Frozen” team of Kristen Anderson-Lopez and Robert Lopez. Set in 1999, Whitman plays another “good girl” who falls in love. That’s the easy part. The hard part is keeping it going, and that’s where Broadway musical comedy comes in: there’s always a happy ending there, or so we hear. We miss “Crazy Ex-Girlfriend” so this can’t come quickly enough. Do you still not have Hulu (or at least a friend’s password)? That’s where it’ll stream when it’s ready, so get ready yourself.

‘Interview With the Vampire’ gets a series do-over

Buffy, we live in a post-vampire world. After “Twilight,” “True Blood” and “Only Lovers Left Alive,” it feels sometimes like the sitcom “What We Do In The Shadows” could be the most accurate accounting of what the pansexual undead really have to put up with. But we recall our first love, the 1994 film “Interview With the Vampire,” which was fraught with tension over whether a man wanting to bite another man’s neck would make him look gay. Well, the cast is set for AMC’s series reboot of the iconic Anne Rice novel. Australian actor Sam Reid (“The Newsreader”), Jacob Anderson (“Game of Thrones”), Bailey Bass (the upcoming “Avatar 2”) and American theater institution Eric Bogosian (“Uncut Gems”) will retell the tale as old as time. Creator, executive producer and show-runner Rolin Jones is taking the lead with Mark Johnson, Christopher Rice and the late Anne Rice executive producing, as well. Exciting news for those of us who can’t get enough of bloodthirsty night creatures, the show drops on AMC sometime later this year.

Margaret Cho will be your dream guidance counselor in ‘Prom Pact’

We confess we don’t quite understand what has happened to the tradition of prom. We’re thrilled for the strides queer students have made in breaking into the formerly discriminatory institution, but the trend of promposals seems like it was created by stunt queens and — ohhhh wait, now we get it, queer kids took it over all the way. Now that that’s settled, we’re pleased to report that one of our all-time favorite queer queens, Margaret Cho, has been cast as a guidance counselor in the Disney+ original film “Prom Pact.” Of course, the actual star of the project is rising mega-teen Peyton Elizabeth Lee, Disney royalty thanks to her leads on both “Andi Mack” and “Doogie Kameāloha, M.D.” Lee stars as a college-obsessed girl who, along with her best friend, played by Milo Manheim (Disney’s “Zombies” and “Zombies 2”), plans to avoid prom. This is, obviously, the opposite of what’s going to happen. But we’re looking forward to hearing some suitably anti-heteronormative wisdom from Cho on the way to a traditional happy ending, regardless of the nature of the prom date. Look for it to pop the question later this year on Disney+.

Loved it, hated it, hate-watched it, whatever you did when “And Just Like That…” dropped its magically post-COVID earnestness and fresh Balenciaga bags into your life, well, you’ll get to do it all over again when the series returns for a second season. It turns out we all want to see why Miranda has lost her mind over the comedy concerts of Che Diaz and whether or not Carrie’s hip replacement will take. OK, that’s not really true. But we truly are fully in love with Sarita Choudhury’s character Seema and the last-minute introduction of Rabbi Jen, played by trans actress Hari Nef, and we’d like one or both of them to take over the entire show. But whatever the reasons you’re hanging in there for this decidedly different chapter in the lives of at least three of your favorite “Sex and the City” sisters, HBO isn’t going to leave you hanging. There’s no timeline for any of it yet; according to Michael Patrick King the creative discussions haven’t taken place. But we’re going to guess that another December rollout feels possible? Just don’t hold your breath for Samantha.