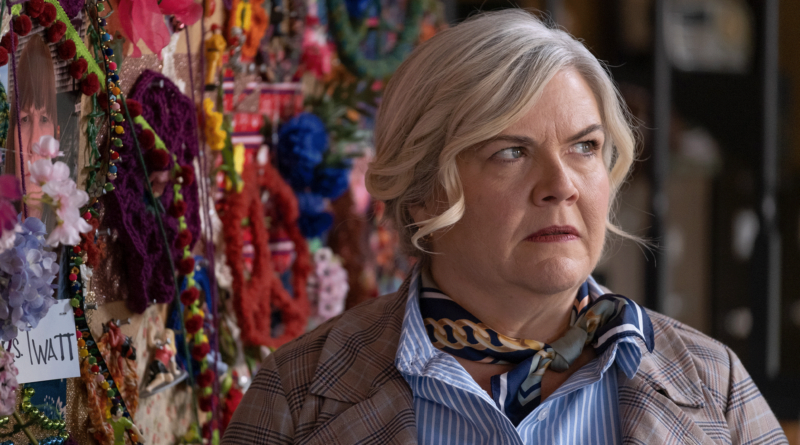 Writer-actress Paula Pell knows it’s ridiculous: a dowdy, out-of-touch suburban broad with an accent that is somehow a little British – or Irish, or something – who solves murders in her quaint town. But the Emmy winner, who wrote for Saturday Night Live for nearly 20 years and recently made a dildo-assisted splash in front of the camera as Val in the Netflix original movie Wine Country, ate up every bit of Murder, She Wrote. So playing a randy, gay Jessica Fletcher? It’s the kind of role she’d kill for.

Luckily, she didn’t have to. Fellow comedian and 30 Rock actor John Lutz asked Pell if she’d be interested in portraying an amateur sleuth. She said absolutely. And now, for 12 short-form episodes on Quibi, she is. In the hilarious satire Mapleworth Murders, Pell’s Abigail Mapleworth solves insanely silly murder-mysteries in her own peculiar way, with help from her millennial, selfie-obsessed niece (Hayley Magnus).

I don’t think there could possibly be a better time for this show. I needed to laugh.

That makes me so freakin’ happy. I hope that that is true for many people, and I hope that a lot of people watch it, because we loved making it so much. It was one of those moments, and there are so few. Wine Country was one of them. But those true things you do and you go, “If I were able to do that as my job, I would do it all the time.” It was just such a romp of joy.

You know, we weren’t sure what date we were launching because of everything that has happened, and schedules were so screwed up. It was getting so … like, god when is this going to come out? And I really am glad it came out when it did because it does feel like our souls are so exhausted that we just need something to laugh at. Something weird that’s not terrifying.

Are you eager to find out what Angela Lansbury thinks of this show? Because I am.

I am eager. At first we were talking about maybe having a tiny cameo or something if she was able to. I mean, in the second season we would love to have something where I’m having trouble with my niece and then I call my aunt and it’s her; we’re all connected.
Because we’re so filthy in it, I was a little bit worried that if we called her and she saw some of it, she’d be like, “Oh, this is disgusting.” But then I remembered, of course, that Angela Lansbury is such a theater broad and she played Mrs. Lovett in Sweeney Todd, which is just my dream role. And I’m like, “She can be very dark.” And very sweet, I’ve heard, from everyone I’ve ever talked to that has ever met her. I would be thrilled some time to have her even see it or look at it or know that it’s just an homage, because it’s got so much love behind it for her and for that show.

What was it like to bring Abigail to life?

So much stylistically made me so freakin’ excited because the style is so specific. We wanted her to just be really eccentric and mix all these different patterns. By the end of it everyone on set was so funny because they’re like, “I’m obsessed with the Mapleworth style, and I really, really wanna dress like Abigail Mapleworth.” The bucket hats, the trench coats, the scarves – it’s such a reminder to me of all those old broads in my family: those great aunts, the grandmas and my mother, who is now in her 80s. She’s hilarious, and she’ll just get her slacks on with her little Chico’s jacket and her scarf and her earrings and her lipstick and then she’ll come home from church and go sit in her bra with her necklace still on and eat potato salad and a hamburger. Ha! Just very strong women who are also dainty are my favorite thing of all. I have always loved matrons. I was born at 50. And like, is there anything better than The Golden Girls? I mean, you just want to live with them.

How did you land on that wild affectation for Abigail?

A little bit of it was this actress that I worked with, Anne Meacham, when I was in college. I understudied; we had a pro theater company at University of Tennessee. They would bring in people from Broadway and soap stars. I worked with Melissa Gilbert, and all these people who were on these shows in the ’80s. And this woman was Anne Meacham. She was a theatrical actress on Broadway who did a lot of Tennessee Williams plays. She was also on Another World, the soap opera. And she was just this old theater broad with red-dyed hair pulled back in a tight bun. She was really skinny, and she was blind, and I had to take care of her the whole time because in The Lion in Winter she played the queen. And she was so eccentric: “I love you! I hate all of them! But I love you!” She would take my dog and put my dog’s face in her makeup mirror and she would put his face in there to make him look at himself in the mirror. She was the ultimate theater broad. And I ate it up! I was just so obsessed with her.

I’ve often thought of doing a one-woman show where I just was her and did a bunch of adventures that happened during that time. So all these years, I’ve had that voice in me. So Abigail has a bit of that dainty but sort of “Is she British? No” vibe. You’re like, “They’re born in Wisconsin but they talk like they’re European.” So I just love those dainty ladies that have a household of knick-knacks and a lot of dogs. And a “handywomanman.”

Speaking of a handywomanman, I had to take a double-take because that’s your fiancé Janine Brito as Junie.

Ha! When she kisses me and takes my earring out of her mouth.

Whose idea was that?

That was her idea. She was like, “I think once I’m whispering to you, I should come back and have your earring in my mouth.”

Did you do it in one take?

No. We did a bunch of different versions of that, because there were some where she was whispering a lot of things and I was saying, like, “Oh, well, we can do that together. Or separately and watch each other!” But we do want to do more of Junie. We want Junie to be in there always, like, cleaning out my pipes, or down under the floor, under my bed doing something. Just always working.

Would you be any good at solving a murder?

I’ve always loved the idea of being a detective, but I would want to be the one that’s in the office, or going to the people that aren’t scary and dangerous to ask them questions. I would love being part of solving something that helped people have closure or helped find a bad person. Like, I would love doing that. But I also have fear of that sort of repercussion of criminals. When I was young I was always afraid somebody was going to be stalking me for turning them in.

So I would love all the sitting and talking about the human nature of it and trying to interrogate someone and getting them to admit something and be good cop, bad cop. That part really is interesting. But the rest of it would scare me. I wouldn’t want to be the one in the danger part of it. I’m a chicken that way.

As editor of Q Syndicate, the LGBTQ wire service, Chris Azzopardi has interviewed a multitude of superstars, including Cher, Meryl Streep, Mariah Carey and Beyoncé. His work has also appeared in The New York Times, Vanity Fair, GQ and Billboard. Reach him via Twitter @chrisazzopardi.