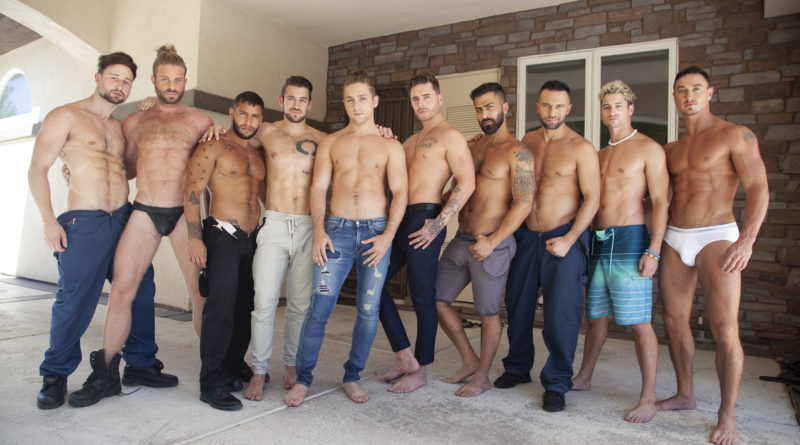 Moore scares, Moore hijinks, Moore dicks! Prepare yourself for another fright-fest turned sex-fest with the latest installment of NakedSword Originals’ award-winning Scared Stiff franchise. In Scared Stiff 2: The Amityville Whore, A-list newlyweds Calvin Banks and Dante Colle enlist Realtor-to-the-stars, Falcon Exclusive Josh Moore, to help them find their dream home. Known to have access to the best properties (and one of the biggest dicks in the business), Josh shows them the gorgeous Amityville Mansion. Surprisingly, the spacious estate is in their price range… so what’s the catch? Is it bad plumbing? Termites? Or something much more sinister?

You wrote the original five-time best picture nominee, Scared Stiff, 13 years prior to its 2016 release. Was it always intended to be a series, or was Scared Stiff 2 born from the success of the original?

No, but like all the great horror movies of the 1980s, like Friday the 13th and A Nightmare On Elm Street, we quickly realized it deserved to be a franchise. Chi Chi and I already have a lot of ideas for the next one!

Well, I wrote a funny little part for myself in the script and then couldn’t even schedule time to shoot it! I was on a tour in Australia when I got a text from mr. Pam saying it was now or never. So I shot a quick thing on my cell phone! I’m glad it made it into the final cut. As far as ‘breaking the fourth wall’ is concerned, I just always enjoy stating the obvious and saying out loud what I assume the audience is thinking. Things like “Okay, enough campy dialogue already, can we please see some dick!?” (Laughs).

Watching the sidesplitting b-roll from both films, there are a handful of pop culture references – from political anecdotes, to mainstream and cult television and film. The latter left me curious about your film influences. Excluding yourself in the cult comedy-horror Gingerdead Man 3: Saturday Night Cleaver, what do you consider your ride-or-die favorite comedy-horror films?

I adore when horror and humor collide, but it’s a difficult thing to do properly. Back in the 1990s I wrote a play called Scream Teen Scream that later became a short film starring myself, Sherry Vine and the late great Alexis Arquette. I also wrote the past 3 shows at Knott’s Scary Farm for the ultimate horror/humor mashup, Elvira. My favorite example of this creepy comedy combination has to be the original Evil Dead and Evil Dead 2. They always have me screaming with laughter!

Your acting in this film is superb and your character is integral to the films set up. How did you prepare for this role? Did you have a character in mind when you were cast or was it completely off-the-cuff?

The funny thing is mr. Pam and Chi Chi (LaRue) gave me a rough outline for the character, and I was like “great I don’t even have to act”! The character is really similar to me, so it was easy…

Aside from watching the Scared Stiff series, what Halloween activities will you be enjoying over a pumpkin spice latte this October?

Well, I absolutely love pumpkin carving so I’ll be doing a lot of that with my little nieces and nephews!

You once told TheSword in an interview that you are “…more (of a) bottom… But I am getting more into topping because I’ve got a huge dick and it’s about time it got some use.” Since then you have definitely been getting your ‘dick wet’ so to speak. Your three-way with Dante Colle and Calvin Banks in Scared Stiff 2 is maybe the most dominant we have ever seen you. Do you now consider yourself more of a top? And if you could choose one actor you have yet to work with to top – who would it be, and one to bottom for?

As with most films, especially adult features, lines, characters, and settings can change or evolve during filming. In the case of Scared Stiff 2, the character of the ‘sex-deprived insane Madame’ was born behind-the-scenes. What lead to the creation of this character, and inevitably to you stepping in front of the camera to fill the role?

It was actually mr. Pam‘s idea. While filming for me, she asked me to jump in and play the Amityville whore! Pam always likes to think of things to add to the production that will make it better and funnier, and I love that about her. Of course I thought it was fun to get in front of the camera because I’m a greedy media slut (laughs). This cast was so fun! We had the greatest time creating this and working with them all.

You’re no stranger to an on-camera appearance in films like Falcon Studios The Velvet Mafia, All Worlds Video, More of A Man and more. In fact you’ve won AVN, GayVN and other awards not only for your directing and presence in the industry, but also for Best Non-Sexual Performance in a feature film. Thinking back on your career, is there a particular on-screen role that has stood out to you? What made that role so memorable?

The funny thing is Jackie wrote me the original Scared Stiff script over 13 years ago and I just kept it in my desk thinking I would never make it. I gave the script to Tim Valenti (President & CEO of Falcon Studios Group / NakedSword) and he went mad for it! I directed that first film and Pam was in charge of cinematography and lighting. When NakedSword approached me to do part 2, Pam and I decided to co-direct. We assembled one of the most incredible Casts, in my opinion, to do this kick ass amazing movie!

Your love for this film radiates strong. What can you tell me about reuniting with Jackie Beat & Chi Chi LaRue on this sequel, and how was it working with an entirely new cast of characters?

I took the lead on the cinematography and Chi Chi was in charge of coaching the actors. Having the cast arrive on set with their lines on point is a director’s dream come true! Every cast member completely owned their character which made it so much fun to film. Also teaming up with award-winning cinematographer and my best friend Leo Forte, was icing on the cake of an already great experience.


From the behind-the-scenes photos, it’s clear this cast and crew had a good time working together. Did it just click from day one?

The first dialogue scene we filmed was Drew Dixon and Colby Tucker as the ‘Ghost Guyz’ hunting spirits in the attic. They were absolutely hilarious and set the tone for the entire movie and it just escalated from there. So many times Leo and I had tears streaming down our faces from trying not to laugh & hold the camera steady. Demon semen!!! Jackie Beat sleep mask! Omg endless moments!

If you’d rather skip the plot & just jerk off, have no fear, all the sex scenes are hot as fuck so after you’re sitting in your puddle of (ghost) goo, you can continue being entertained by amazing guys, a hilarious plot, and smart dialogue, all edited to perfection by our award-winning editor Jessie Garcia. I hope you enjoy watching the movie as much as we enjoyed filming it!