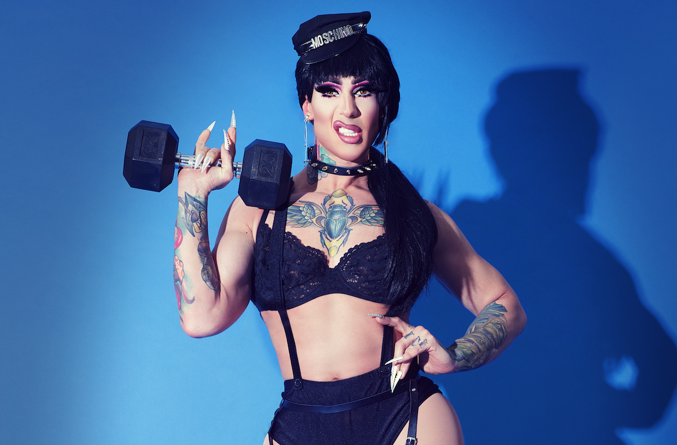 Kameron Michaels walked into RuPaul’s Drag Race season 10 talking about her muscles and her ultra-feminine drag aesthetic. She was quiet and unlike most of her competitors, she didn’t go around causing drama or talking about how much she wanted to win. Michaels took the silent but deadly approach and eventually won a challenge and made it all the way to the top 3.

While she was successful at avoiding drama for most of the season, she was suddenly caught in the middle of controversy during the reunion episode. Multiple queens accused the muscle queen of being rude and never talking to them. To add insult to injury, when asked who should be crowned America’s next drag superstar, none of the queens at the reunion mentioned Michaels’ name.

Michaels rose above the reunion though and went on to slay Asia O’Hara (and her sleeping/possibly dead butterflies) all the way to top 3. Gloss had the chance to sit down with Michaels to discuss that tense reunion, those butterflies and if we should be expecting any music from her any time soon.

I was at a viewing party when you did your feather runway and the crowd audibly gasped and everyone was shook when you came out on the stage. What was your favorite look that you did on this season of Drag Race?

I think the feather look was probably my favorite. Plus it saved my ass that week, so how could I not like it?

Besides yours, what was your favorite look of the season?

I think Aquaria’s mermaid was one of the most avant-garde, other than my feather I think. It didn’t look like a costume. It looked like a full-on oil slick. I think it was so well done. It was one of my favorites. Asia’s dandelion hats incredible runway was pretty incredible so I would say those two are probably my other favorites.

Going back a couple weeks, you were at the reunion and a large portion of the reunion at the end was about your demeanor and saying hi to the other queens. Going into the reunion, did you think that was going to be such a hot topic that they were going to talk about?

No and I think you can see that all over my face when it happened. No, I had no idea that some of the girls felt that way. I speak to all of them. I think I didn’t speak as much as they expected me to or as quickly when I enter a room. It’s something that was brought to my attention. I think it was exaggerated, for sure… They definitely helped me realize that in any room we have to walk in and acclimate to our surroundings before we speak.

Also at the reunion, none of the queens said they were team Kameron. Did that shock you? Were you expecting a couple votes for you?

I thought one of the girls would vote for me. But my other competitors in the top 4 were really strong and, you know, extreme personalities. I don’t think that it was malicious by any means. The other girls are really talented.

Was there anything that wasn’t shown at the reunion or this season of Drag Race that we didn’t get to see that you were hoping America could see?

At the finale you got surprised with a message from your grandmother. Did you expect that coming at all or did you know she was actually watching the show?

I got a phone call, the second episode of the show, from her. She sounded a little weird. She said something along the lines of, “I’ll always be proud of you. There’s nothing you can ever do that would make me not love you.” I was wondering, where is this coming from? It was a very weird phone call. I didn’t know at the time she was watching the show, but now that I remember that phone call it makes total sense.

During the top 4 ‘Lip Sync for the Crown,’ you probably had the least amount of reveals and stunts you tried to do during your performance. Was that a conscious decision to not have a big, over-the-top reveal?

It was a conscious decision, but it was also a matter of time and money. I had the money. I actually didn’t have the time. I’m touring and so busy and we’re trying to plan out all the finale stuff while we’re touring and could I have done something big and extravagant with more time? Absolutely. I think most importantly, my lip syncing is my strongest suit and I just wanted to play that as my strength card. I didn’t feel like I needed a big reveal.

I saw you previously said that you didn’t know Asia was going to be releasing butterflies during the lip sync. At what point during the night did you realize that there were actual butterflies on the stage?

There’s a meme going around and I think you can see my face. I didn’t know what happened until the very end. I was busy concentrating on what I was doing.

You said it takes a lot of time on the road to plan your finale look. What is it like being constantly on the road but you’re still expected to turn new looks and performances from city to city.

Hard. Yeah, it’s hard. For example, I’m home just today and then I’m back on the road tomorrow. It’s a little hard. You have to delegate things. I have a couple hairstylists in different cities that are working on things for me. I have a couple costume designers in different cities. It’s a lot of phone calls and emails and trusting my team to make things happen for me because I don’t have a lot of time to do much of anything right now.

Now that the season is officially over, what can expect to see from you?

A lot of touring. I’m very busy the rest of the year. There has been music in the works. I’m a perfectionist though, so that’s been put on hold. Until I have the time to give that the attention that it needs, I’m not going to release anything that is not of the quality that I think it should be. But music will be my future. I think people expect it from me from the show.

Later this month you’re going to be appearing in San Francisco at Oasis. Have you ever been to SF before? What are your opinions on California?

I love the West Coast. I’ve never been to San Francisco though, so I’m excited to go. Gay mecca, gay capital over there. So I’m really excited to see what the community’s like. It’s the only large California city that I haven’t been to yet.