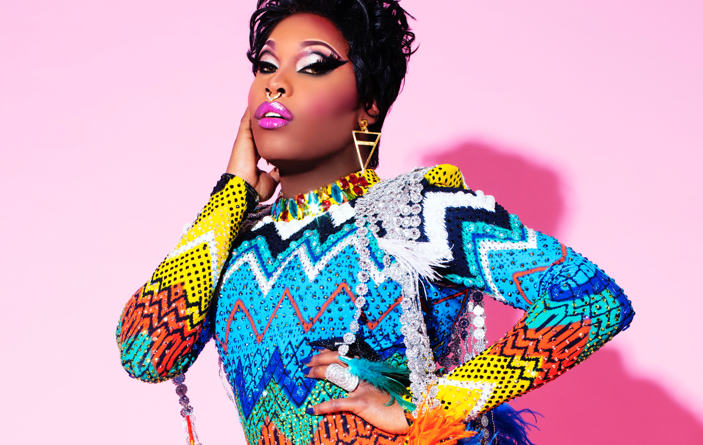 After the accidental slap heard around the world, it’s time for Asia O Hara’s Drag Race! …Well, maybe not quite yet. Drag superstar Asia O’Hara is currently competing on season 10 of RuPaul’s Drag Race and just made it to the top 5. With two maxi-challenge wins under her belt and a slew of iconic, meme worthy looks, O’Hara is the top frontrunner for the crown.

O’Hara is currently touring all over the country and preparing for her San Francisco debut at Oasis on Saturday, June 16. I was lucky enough to chat with O’Hara about her first ever Bay Area stop, who she’s voting for Miss Congeniality, and what it’s like to get slapped by RuPaul.

How’s life been on the road for you? You’ve been touring nonstop, but I also know you had some recent drama with lost luggage, so how’s the road?

You know, the road is that. Traveling on the road, there are so many parts of the experience that are out of your hands, so you just kind of have to know that that’s coming. So all in all, it’s been great.

You were just at RuPaul’s DragCon – your first DragCon. How was that experience for you?

It was wonderful also. I was definitely, you know, apprehensive going into it, because I’d just heard so many stories about how killing it is and how draining it is. You’re gonna leave there agoraphobic because you’ve been around so many people all weekend. It was great. I’m definitely now super excited about the next DragCon because I feel like I’ve got one under my belt and it wasn’t as horrendous as I thought it was going to be, so I’m excited. It was definitely a positive experience.

That’s good. I was living for your booth. It was one of the more quality ones there.

Aw, thank you very much.

It was… fun. It wasn’t fun in that second, when her hand touched me. It was very fun, because Ru is 100% in control of every aspect on the show. In that moment to see her so concerned about, “Ok, what’s about to happen? Did I actually hit her really hard? Is she hurt? Are we going to have to stop the camera? Are we going to have to do this again?” Once she realized I was fine and was just hamming it up. It was just very refreshing to see her for that split second, not know what was going on.

You played it off very well. I’m really excited for the new season of Asia O’Hara’s Drag Race.

So far, you’ve had some of the most iconic looks of the season. But one that kind of divided fans was actually your promo look with your black and blonde wig. What’s the story behind the wig and do you stand by your choice to wear it?

You know – yes. I stand by everything. As an artist, I can look at things that I’ve done in the past and I can look at a show I did last night and see ten things that I would do different in the future, but that doesn’t mean that I regret any decisions that I make artistically. With art, all roads lead to success, in my opinion. I know the fans were very divided, even my own friends were very divided. You know, it’s not the end of the world. It’s a wig. The thing about drag that I love the most is it’s not like it’s my actual haircut. So next week I’ll put on another wig. I do stand by it. In hindsight, after seeing the photo, would I have worn it? Probably not. But I’m also not like, “Oh my god, what am I doing? My career is over. People are going to hate me.” You know, it’s fine. It’s a wig.

With that look, your fish look, your dandelion Ikea look and your Tweety Bird, you’ve had a lot of really good looks this season. What’s been your favorite one so far?

Probably the Tweety look. It was the furthest from my comfort zone of probably anything that I wore. A lot of the other ones were deeply rooted as parts of my aesthetic that I really like. The Tweety was something that was not that way. When I looked in the mirror before I went on the runway, I was like, okay, if that hate it, at least I’m proud I tried something different and got out of my comfort zone.

I know we got a little peak online of showing how you packed up your Tweety Bird look, but with that and your dandelion look, you had a lot of big pieces. Were you tight on packing for the show?

I am a packing pro! I mean, I’ve traveled doing drag for 11 years now. Ironically this past weekend, I got to my shows and every time someone picks me up from the airport – I was in El Paso, Las Vegas, Columbus, LA, back in Dallas – and every time someone would pick me up from the airport, they would be like, “Oh my god, you just have this one suitcase?” And I’m like, “Yeah, that’s all I need.” I’m a packing pro and I fortunately make all of my own things and one of the first things I think about is, okay, can I make this in a way that can travel?

So for your mermaid runway look, my favorite look of the season so far with your fish mask, you were in the bottom that week. Did you have a plan for what you were going to do if you had to lip sync with the fish mask on?

You know, I did. I think the smart thing in this competition is always being prepared to lip sync. Every time I go on the runway, I think to myself, “Okay, if I have to lipsync, what’s going to happen?” The mermaid fortunately was ironically a little easier because obviously we all had those fish tales on, so we were all already thinking, “I’ve got to get out of this mermaid tail if I have to lip sync.” So everyone was already in that mindset of being prepared to lip sync. I definitely always have a plan.

So you’ve posted on social media about your friendship with Monet and she just recently left the competition. What’s it like watching people leave week by week, especially with people like Monet who you’re really close to.

I didn’t expect to be that moved by people leaving, but it is bad. It is bad every week. Even from the first episode. It was sad to see Vanessa leave. Then it was sad to see Kalorie. That never changes, because although you want to win the competition, you’re also seeing people’s dreams not come true. Like I’ve said one hundred times, making it an additional week is a small success in itself. It’s not fun seeing anybody leave, especially people like Blair and Monet that I felt like still had more to offer the show.

You’re currently campaigning on social media for Monet to win Miss Congeniality. Why her and not you?

Because Monet is more congenial than me and that’s the facts. I think if people, before they vote, would make sure they understand the definition of congeniality, I think the choice would be clear. Now, I’m not going to lie, I know that that’s not going to be the case. She is just in general a more congenial person than I am. I do a lot of times go out of my way to help people, but that’s just a small part of it. Monet not only helps people but she is always a voice of reason. She’s always positive. She’s always encouraging. A couple weeks ago when she was in the bottom and I made a joke about her being in the bottom, she laughed about it. Most people don’t have that type of strength. So that to me, is a person that definitely deserves to be Miss Congeniality.

Would you say that Aja’s critique last season of it being a fan favorite award – would you agree with that for most of the previous winners for Miss Congeniality?

I would agree. But there have been times when the fan favorite did happen to be the most congenial person. I’m sorry, but in our country, if it comes down to voting, people are going to vote for who their favorite person is. Qualification has, to an extent, gone out the window, especially with talent. We just saw a prime example of that on American Idol. We know going into things that if we ask America for their opinion, they’re going to vote for their favorite, regardless of what you’re asking them for.

What can we expect from you post season of Drag Race? Pretty much everyone in the cast so far has released a single. Are we expecting any music from you? Any music videos?

I don’t know about music. What you can expect from me – I am working on a non-profit organization to provide financial assistance to people that work in the entertainment industry that need assistance with their bills and medical bills when they’re out of work. So I’m working on that. I’m also working on ways to create avenues to showcase talents of other entertainers that may not qualify for RuPaul’s Drag Race. So those are two things that I am working on. Fans can expect to see me doing everything I can to make drag a bigger, brighter place for everybody. I’m not going to be focused on things that are solely going to benefit myself.

That’s awesome! And last but not least, we’re super excited for your Oasis San Francisco show this month. Have you ever been to SF before? What are your thoughts on the city?

I’ve never been to San Francisco!

The only places in California that I’ve ever been are LA and San Diego. I’m super excited because this is definitely a bucket list city of mine. San Francisco, Provincetown, and Seattle were the three places I had to make it to at some point this year. I’ve been to Seattle and now I’m coming to San Francisco. It’s honestly a geographical dream come true, as nerdy as that sounds.