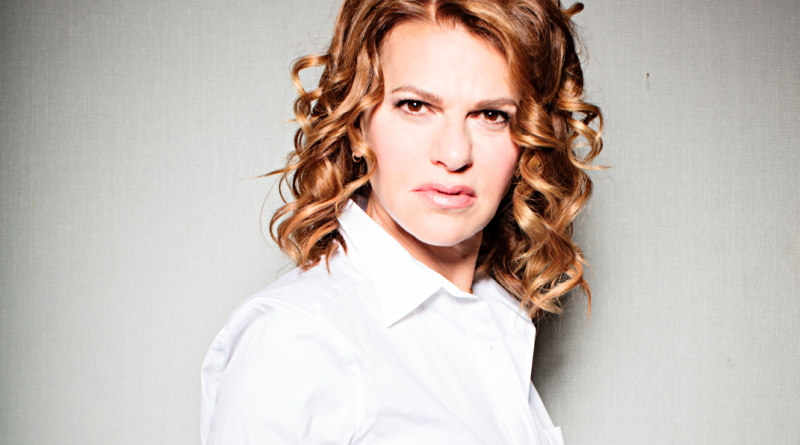 Before unloading her frank thoughts on TV co-star Roseanne Barr’s alt-right politics and fellow comic Kathy Griffin’s viral Trump-beheading pic (“It just wasn’t funny”), Sandra Bernhard proclaims herself quite aptly as “no-nonsense.” That has been, after all, her way since the ’70s, when lambasting Hollywood’s who’s-who first proved lucrative for the fearless comedian, actress and musician.

Then, from 1991-1997, she famously put a face to bisexuality not just as herself – Bernhard was out from the get-go – but as Nancy Bartlett on ABC’s hit sitcom _Roseanne_. Introduced in season four as the estranged lesbian wife of Arnie Thomas (Tom Arnold), Nancy, who later came out as bisexual, gets chummy with Roseanne Conner and Jackie Harris, Roseanne’s younger sister (Laurie Metcalf).

Bernhard, 62, will revisit her groundbreaking character during the show’s revival. As for the controversy regarding Roseanne and her TV alter ego’s support for President Trump? “_Roseanne_ is gonna be another round of really fun and really smart television,” she tells me. “Roseanne has never turned on the gay community. Roseanne likes to stir the pot. She always has. So, I guess that’s the way she’s doing it now, and I don’t agree with any of the Trump shit, but I think she’ll transcend that and the show will still be amazing.”

What can we expect politically from the _Roseanne_ reboot?

I think they’re gonna do a deep dive into where the working class is at right now. I mean, maybe not as deep as you would need, considering that half of the working class who don’t have their industrial-ass jobs anymore are strung out on opioids. That’s not very much fun; I don’t think they’ll go there (laughs). But I think we’re in a real crossroads in this country, and _Roseanne_ has always been good at revealing that, and at the same time making it funny and moving and insightful. I’m only in the last episode, so I don’t know exactly how they’re approaching it. I know there will be very personal stories like there always were, as opposed to globalizing it. I think that’s what makes the show special.

I imagine you’ve been hearing about the backlash Roseanne’s politics have ignited since the reboot was announced.

I was hearing about that way before they announced the reboot, and I just dropped out of the conversation because I don’t want to get into that on Twitter. You can’t do that; it goes nowhere. And everybody who makes political decisions also has to live with the fallout. That goes for famous, successful people and for people on the street. If you voted for Trump and you thought it was gonna be a lark and funny, the results are right there in front of you every day.

My hope is that it might bridge some severe societal gaps, maybe open some minds, maybe even my own. But it’s been very difficult for people who didn’t vote for Trump to even begin to understand or empathize with someone who supported him.

I don’t have any empathy for people who voted for him. Honestly, I really don’t. It’s obvious that he didn’t know anything about the working class population; he exploited it and (his supporters) were naive and unwilling to read or to know what was really going on. He played them, and to a certain extent the few people who are still in his corner, he still plays them. So it’s just kind of a bummer.

A lot of people have strong opinions about the liberal-minded cast returning to a show led by a Trump supporter.

I’m glad they do. She should hear it. And it’s better for her to hear it from the people that have supported her and watched her show than it is from me. I mean, we’re friends, we’re friendly, and I’ll continue to do the show. But it gets underneath your skin when 20 million people who used to watch your show are like, “What the fuck?”

She seems to know how people feel about her politics based on her appearance at the Golden Globes, when she said, “I’m kind of known for creating some great drama” while presenting with co-star John Goodman.

Of course she knows.

Well, I’m excited to have Nancy Bartlett back. You told me in 2013 that you didn’t think Nancy would have a place on the show if it ever returned.

It’s not that she didn’t have a place. But I didn’t think they’d be able to fit her story back in because of all the new characters and the family and reestablishing what’s been going on politically, so when they added the extra episode and wrote me in I was thrilled.

Nancy was one of the earliest portrayals of bisexuality on TV. What surprised you most about how her sexuality was treated on the show in the ’90s?

I mean, she was fun and it was a fun concept that she ran from being married to Tom Arnold into the relationship with Morgan Fairchild. It was sort of a lark at first, and of course it evolved. They wouldn’t let me kiss Morgan Fairchild under the mistletoe – we had to cut the kiss – so that’s how far we’ve come in terms of what you see sexually on TV.

But yeah, she was a funny, kooky, free-spirited character who got to do things and say things that was part of the evolution of sexuality on TV. It wasn’t intentional – it wasn’t like we were trying to do something groundbreaking. But that is how Roseanne is and was. She just did things that felt organic and authentic. She ended up having the actual kiss with Merle Hemingway (at a gay bar that Nancy took her to), but nonetheless, Nancy’s fun, and if they picked up the show again they’ll expand her story.

We’ll get more Nancy if there’s another season?

Oh yeah, absolutely. For sure, yeah.

Roseanne will have a genderfluid grandson, Mark (played by newcomer Ames McNamara), on the show as well.

What are your thoughts on the show continuing to be inclusive?

I just think there has to be a little bit of everything in all the shows now, and I don’t know. I’ve gotta see the show before I can comment. He’s in my episode, but to the extent of what they’re trying to do with that character, we’ll have to see.

Speaking more generally, how do you feel about representation as far as LGBTQ people go on TV?

It’s certainly gotten a helluva lot better than when Nancy first came on the scene. And I think with each year that goes by, especially with the advent of Hulu and Netflix and Amazon, there’s been major breakthroughs.

Are you currently enjoying any shows with LGBTQ characters?

I watch _9-1-1_ just because I think it’s a ridiculous show. Everywhere you turn there’s new, interesting gay characters. But I don’t go to a show for that. For me, my life has never been informed by that. I’ve always been comfortable with who I am sexually. I’ve been sexually fluid, I’ve broken all the ground rules since I was 17 years old. So, I’ve never had any need for somebody to be my role model. I’ve been my own role model. So, it’s a non-issue. But I think for the public at large it’s been a great time and a revolutionary time for people to see all kinds of characters – racially, sexually, women, men – come to life in a new way.

Have you heard of the very gay-centric _Schitt’s Creek_?

Honey, I was one of the first people to be hip to it!

(Laughs) I know, yes. But yeah, of course. Love it. Dan Levy is terrific – super funny and smart.

What can we expect from you in the future?

I’ve got three scripted projects I’m trying to get off the ground right now, so that’s a lot of my focus, and it’s a lot of hard work. So, I’m chipping away at that and, of course, continuing to go up for other roles as an actress and do my live performing.

What kind of scripts are you working on?

They’re all comedic. One is based on my early years in LA when I started off as a manicurist. One is a project with (performance artist) Justin Vivian Bond. We wrote a musical about six years ago called _Arts & Crafts_ and we’re trying to get it into a TV series.

I remember you telling me you’d never stoop so low to do a reality show. Still out of the question?

Yeah, listen, if I haven’t done it by now, I’m certainly not gonna do it at this late date.

How do you feel about the way comedy has addressed the Trump era?

Everybody’s speaking about it and being funny and creative about it, and obviously people like Bill Maher and those types do it in a more political way. I think it’s been really interesting.

Sort of, kind of through the back door. I don’t hit people over the head talking about that stuff because so many people are good at doing it verbatim, so I try to keep it more global than just obvious.

Did you think Kathy Griffin went too far with the picture of her holding Trump’s decapitated head?

It’s not about going too far – it just wasn’t funny, and she’s not political. Why is she suddenly jumping on the bandwagon? That’s not what she does. And it wasn’t smart enough or interesting enough. That was its biggest crime.

But Kathy Griffin has been politically engaged and an activist for the gay community.

Who would you consider an entertainer _and_ an activist?

I mean, I’m an activist for being a human being. There’s bigger fish to fry, and my work is inherently political, and it’s been inherently LGBTQ-informed because it’s who I am; it’s what I’ve done from the beginning. I don’t call my audience “my gays.” My audience is my audience and everybody in it forms an alliance every night. You perform for the _entire_ crowd – it’s not about singling anyone out. And if your work is very, very daring and interesting, then smart people come to it, whether they’re gay, straight, black, white, men, women. I mean, you gotta be able to get underneath what’s really going on culturally, and then you’re always gonna have a smart audience sitting in front of you.

Who else in the comedy world can really dig into the cultural zeitgeist?

I don’t have a litany of people I’m sitting here thinking about. I’m sorry. It’s, like, too hard to do that. Right now the people who are impressing me the most are all these kids from the school in Florida. They’re activists. Went through a terrible trauma and they’ve been able to transform it into total activation, and that to me is really impressive and exciting. To talk about entertainers and people – it’s easy for all of us to do all that stuff because we’re not under duress, but when you’ve been practically possibly severely injured or murdered, yeah, that’s something to really applaud and stand by.