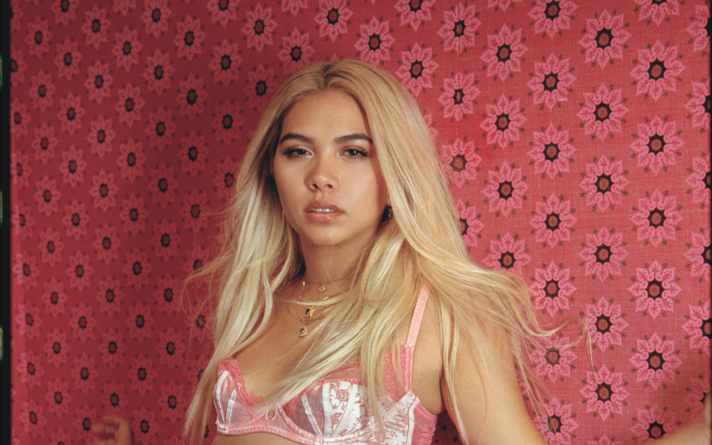 Even lesbian Jesuses get swept up by the grandeur of the Statue of Liberty.

“I’ve never seen it before! It’s huge! Oh my god, it’s huge!” enthuses a giddy-as-ever Hayley Kiyoko, proclaimed “the lesbian Jesus” by her adoring disciples. The unapologetic pop fixture can’t help but check out of our conversation to soak up the moment, her driver cruising over a bridge in New York City. “It’s on my left. I had to, like, gasp. Oh my god, it’s so cool.”

The 26-year-old singer is doing a string of press calls to tout her debut album, _Expectations_, and though I’ve understandably lost her to a colossal Neoclassical monument, Kiyoko eventually remembers why she’s on the phone in the first place: oh, right, music.

Kiyoko’s DIY music career launched in 2013, when her partially crowdfunded debut EP _A Belle to Remember_ was released. _This Side of Paradise_ followed in 2015 and featured “Girls Like Girls.” The single’s video, which has amassed more than 82 million views on YouTube (collectively, her self-directed videos have eclipsed 170 million views), took a hard, unflinching look at the challenges of facing same-sex desire. Kiyoko released her third EP, _CITRINE_, in 2016, which included single “Gravel to Tempo”; in the song’s video, she leaves a group of mean girls speechless with her seductive dance moves. “Curious,” a single from her first full-length, released via Atlantic Records, is as brazenly sensual as any straight pop star’s lustfulness – and the world is better for it.

While taking in the historic NYC views, Kiyoko opened up to me about letting her music tell her queer story (even when it came to coming out to her grandma) and the “gentle and vulnerable and emotional” bond she has with her fans.

Your 94-year-old grandma recently discovered you’re lesbian thanks to one of your music videos. What was that like?

(Laughs) It’s funny: I’ve just been gently sending her videos I’ve been directing, but I don’t know if she’s been watching them or not, because that was the first time she responded directly about my music. I still don’t know what video she watched, but with every video, it’s very obvious that I like girls, so I feel like the cat’s out of the bag – finally.

Which videos of yours would be a good gay conversation-starter for grandmas to watch?

Tell me how you came to be so open about your sexuality as a pop musician.

It’s just been baby steps. I did the “Girls Like Girls” music video, which was the introduction; even still, people didn’t really know where I was at. Then, I released “Gravel to Tempo.”

It’s like, what song do I wanna release next? OK, great. What do I want the story to be? OK, great, and then I release it. Every video I’m wanting to challenge myself and tell a different story and a different perspective on a situation that I’ve experienced. Now, obviously looking back at all these videos, it tells a very solidified story, and I like girls and I was never – as you know, it’s a difficult thing to want to be open about it because it’s a very personal thing and it’s something you don’t feel like you need to share, but it’s been a situation where I’ve connected with so many people through it.

I’ve kind of had to really own it and feel confident about it, because I realize that there aren’t a lot of people who do that. So, you have to lead by example, and that’s the best way to help normalize those feelings, and that’s always been my goal: just to normalize things and not have it be a conversation. I always told my manager: “I don’t want to come out. I just want people to watch my art and take it for what it is.”

Can you talk about some of the queer themes on this album and how your life inspired those songs?

I have a song “He’ll Never Love You (HNLY),” and I love that song because it talks about a situation I was in where this girl wanted to be with me but was too afraid to own her sexuality. So, it was one of those situations where I had to let that person go. It was always a frustrating situation because I knew how she felt, but you can’t encourage anyone to love themselves. That’s a journey on their own.

When, as a public figure, did you first feel 100 percent comfortable being open about your sexuality on a mass level?

I would say probably the music video after “Girls Like Girls,” so “Cliff’s Edge.” That was obviously a bold music video as well, and you can’t argue with what’s going on in that video (laughs). So, that was definitely a moment where I was like, “I’m gonna own this and I’m gonna own who I am,” because, to be honest, on a personal level I’ve always known who I was since I was younger; just sharing that with the world is another level of pressure, I would say.

How would you compare how you felt about your sexuality during “Girls Like Girls” versus “Cliff’s Edge”?

I almost didn’t put “Girls Like Girls” on my EP. It was a very last-minute decision and then I also wasn’t sure what I was really doing because I was seeing the reactions and I didn’t know what my next step was. I didn’t really know where I was going with my career and what my message was, and it was just kind of up in the air, because I made “Girls Like Girls” in a very honest place, just like every other video I do. But after you do something, it’s like, what do I do now?

How did you gauge what was next regarding your queer music narrative? Do you have a team of queer people who are guiding you?

No, I don’t think that’s a reality (laughs). I mean, I don’t know. I’m just being myself and I really don’t consult anyone. I just put it out.

But a lot of pop acts have a team working with them.

Oh yeah. No, no, no. My team is my manager and my day-to-day. I have my team, but they’re all straight (laughs) and they can’t relate. So I go, “This is what I’m doing,” and then we do it, and then I release it. There’s nothing contrived or manipulated with what I do. It’s really: write a song; OK, I wanna shoot a music video; we create a music video; I do whatever I want with it; and then I decide when I wanna release it, and then I put it out on YouTube. That’s really the process. I’m sure it’s different for other artists, but I’ve always been extremely controlling with my art. And when I signed to Atlantic they knew that, so they let me do whatever I want to do.

That control has probably been one of the reasons you’ve been able to connect with all these fans who call you their “lesbian Jesus.” Could you describe the connection you have with your queer fans?

I think the connection is very gentle and vulnerable and emotional because, a lot of the times, it’s interesting: sometimes, kids will say things to me that they’ve never said to anyone else. It’s really an open space, and I think that they know I’m accepting of them. I’m always encountering very emotional experiences, and I’m very sensitive, and I’m very aware and connected to that, so that’s something we share.

What’s it like to think you’re the lesbian pop star you wished for when you were a struggling queer teen?

I don’t know. I feel like – I guess I don’t really think about it that much. I feel like I’m not really looking at myself all the time in the sense of, look who I am. I’m like everyone else, just trying to get through life day to day. And I really want to get to a certain point in my career where people are just listening to my music and giving me an opportunity and a platform, so I don’t really reflect, because I feel like I have so much to share.

As a young person you were pretty hungry for representation, though.

Oh yeah, 100 percent. And there were some great acts out there that I loved, like Tegan and Sara, for example. I love them. But yeah, it’s interesting: I didn’t have a person where I was like, “She knows exactly what I’m going through, and we are connected.” I had icons and idols who were close but not someone that I really connected with.

I had read in The Guardian that Katy Perry’s “I Kissed a Girl” influenced you.

It did? I mean, I wouldn’t say … I don’t think I said it was an influence. They had asked me what I thought about that and what my take on it was, and, because a lot of people were saying negative things, I was saying I have nothing negative to say about it because it reminded me, OK, there’s Katy Perry singing about experimenting and kissing a girl, and that’s great and I support that, and I’m gonna be someone who likes girls all the time and sing about that. So, to me, I thought it was a positive thing because I thought it was a step toward what I was gonna do down the line one day.