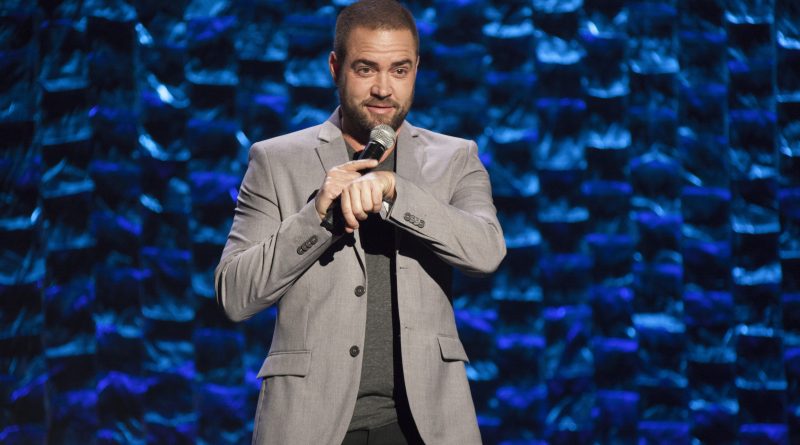 Comedian Ian Harvie on how ‘we’re all trans,’ his vast penis collection and comedy as a tool for change

For Ian Harvie, it’s not about earning the title of “first trans person in the world with a one-hour standup special.” Though that’s a tag the FTM comedian can now claim, for him, he’s hopeful more trans comedians will walk through the door he swung open with May the Best Cock Win, airing on NBC’s digital network, SEESO.

“I’m so excited that a digital network like SEESO, an NBC-based company, has said ‘yes’ to the first trans comic special, which will provide a pathway for others to come through,” remarks the Portland, Maine native.

Harvie, who made his acting debut as Dale during the premiere season of Amazon’s Emmy-winning Transparent, recently opened up about how Margaret Cho was instrumental in helping him discover his standup voice, being a “butch dyke who was only visible because I looked like a man with huge tits,” and the unifying power of comedy.

I have a feeling people will be questioning their own penis adequacy after seeing your comedy special.

Because you get what you get? Don’t overthink it! I make jokes, but people think I must have it bad because I’m a guy without a dick, but really I have many. I have tons of dicks. I have a range: softies that you can pack in your underwear to make it look like you have a penis, but, really, I’m too lazy to even remember to do that. Small, medium, large. Vibrating ones. Balls, no balls. Different colors. Ones that look kind of alien that don’t have a penis head. All kinds of different dicks. I’m old enough to have a collection. (Laughs)

Oh, you’ve been collecting for that long?

Yes, and I’ve had girlfriends be like, “No, we’re getting a new one.” It’s very lesbian to be like, “Listen, those other dicks you bought with other girlfriends – they’re not going in me. We’re getting a new one.” (Laughs) It’s very interesting. I mean, I can’t say, “Listen, you gotta get a new vagina.” And if you’re a dude with a dick, you can’t get rid of it and get a new one just because you fucked someone else with it. That’s the dick you have. It’s a very loose queer/lesbian/dyke rule that if you have a collection of dicks and you have a new partner, you’re getting a new dick.

For some trans people, discussing genitalia and gender-reassignment surgery can be touchy subjects. How do trans people react to those topics when you talk about them?

I don’t get negative feedback from trans people because I’m only talking about my story, and I think most people understand when they’re watching comedy, especially my comedy, it’s narrative. So, I’m not sharing someone else’s story. I don’t think that you can go, “Well, that’s not true about trans people,” because, well, I’m a trans person and it’s true for me.

It’s rare, but I think the negative stuff that I get has been when I maybe come across as ageist, like wanting old, conservative people to die.

Because you’re a public figure, many trans people may see their story reflected in yours.

Listen, you can identify with feelings – you don’t have to identify with a person’s exact story. I want to make a distinction because it’s so funny when people come out – if you like what they have to say, people call them a role model; if you don’t like what they have to say, they’re a public figure. That’s the difference. (Laughs) So, I may be a public figure, but being a comic, just by the nature of the art, people aren’t always going to agree with me, and that’s OK.

I don’t mind being a public figure. I hope that some of the things that I have to say actually resonate with people. I had a guy come up to me after a show who was a cisgender male – a straight guy – who was tortured in junior high because his nipples were raised. He started to play sports and people tortured the shit out of him. He was labeled as feminine because of his raised nipples, which today would be worshipped in gay culture! (Laughs) But he said he had surgery to correct this thing that he had been tortured by. He wanted to do it for himself to feel better in his body, and he came up to me after a show and was like, “Listen, I never, ever thought of it that way, and I never thought anybody would speak to me like you did.”

What I realized by doing these shows: At first I thought this was gonna be great for the trans community. We’d have this shared experience, and I can speak and they can have things that resonate with them. Now, I just feel I’m speaking to everybody. We’re all the same. This is so stupid. We’re all trans. All the same. We’re all struggling with this. It’s not unique to trans people. And I don’t want trans people to think they’re not unique or beautiful and special – I don’t mean it that way. But this is a shared experience. If you don’t feel weird, you’re the weirdo.

Do you see your comedy as a bridge to trans acceptance?

Yeah, I do. I think it’s one of the most powerful ways to help people access something that they haven’t been able to access before. I marched with ACT UP and Queer Nation back in the late ’80s, early ’90s. Started waving signs. I actually had blank foam core and markers in the trunk of my car ready to go anytime, and I remember going to marches and getting in people’s faces. That resistance is effective – it absolutely is. But I also found this other medium in comedy, where you walk into a comedy club and the audience is so incredibly diverse. People just want to laugh, and it doesn’t matter what you’re talking about. If you can make them laugh, you can access them and give them information about something that they had no idea about before. So, I think comedy is a really amazing tool to change people on old ideas they had.

And this is part of the privilege of being a dude. I get there, I look like a dude, I sound like a dude, and grossly people listen to dudes more. I think what happens is people walk away without realizing it, having this new frame of reference for who trans people are. We’re not weirdos. We’re not freaks. We’re not all the stereotypes that people have put out there in the media in the past. And there’s not a fucking foam core sign in their face. That has value too, absolutely. But it’s a totally different way of accessing them. I’m not wagging my finger at them. I’m making them laugh.

You say that an audience is more apt to listen to a man rather than a woman. Is that based on any personal experience of your own?

It’s this weird shift for me to go from this butch dyke who was only visible because I looked like a man with huge tits. I mean, I was visible for that, but I wasn’t sexually visible to people. I definitely wasn’t anything near a sort of female standard that culturally we have, so I was largely invisible until they figured out that I was female. Then, I was just weird. Now, there’s a shift in how people look at me and listen to me.

How does it make you feel to know that people sexualize you in a way they didn’t before you transitioned?

I’m gonna say something that will piss people off, but generally speaking, if people find true value in compliments about their appearance, then there’s probably some void that needs to be filled that will never be filled with compliments. (Compliments) have never, ever done anything for me. After my chest surgery, I started taking hormones, and I started to love myself in a different way and people (were) seeing what I was feeling about myself. But comments on my appearance? Those are empty to me.

What kind of place did comedy have in your life as a kid?

When you were a kid did you get together with siblings or cousins and put on shows for your family? My thing was, I would come out in the intermission and do a comedy set, and I wrote my own jokes and they were horrible. They made no sense whatsoever. I didn’t understand joke structure – I was 6. But I used to watch The Carol Burnett Show and all the Dean Martin roasts. I used to watch Flip Wilson and Rich Little. Oh god, when I was a kid, we had Bill Cosby’s album of storytelling, which I kind of cringe at now. But at the time, while he was, you know, drugging women, we had his vinyl on our record player, and I remember listening to that. So, I was the comic relief in the theatrical shows we performed. I would always come out during the break while they were changing behind the curtain sheet on a clothesline, and they would be behind me, and I would be telling jokes to my aunts and uncles. That was my early sort of exposure. It’s so weird that after being a kid it never even dawned on me – never registered – that I could ever be an artist like that and entertain people and have it be a career.
I talk about this frequently, but it really was life changing: This guy – a writer for The Daily Show – was writing jokes for The Daily Show and he was looking for something creative to do locally. He started offering comedy-writing workshops at our local comedy club, and he sent me a postcard, and randomly I got it. I owned a web development company, and I’m like, “What the hell is this?” It’s so weird because it was really kind of kitschy, with this cartoony black, old-timey microphone in the spotlight. I left it on my desk at my office for a couple of weeks, and I stared at it many times. I was like, “I’m interested, but I’m really scared.” Finally, I picked up the phone at the end of the week before the class started the following Monday and said, “Hey, I saw your postcard,” and he was like, “I got one spot left.” I said, “I’ll take it! I’ll take it!” I did the workshop and fell in love, and that was 15 years ago this January.

At first I started by writing poop and fart jokes, and I’m like, “OK, that’s not me,” but I was too scared to tell the truth in the beginning of who I was. About two years into it, I wrote my material but didn’t really understand who I was on stage until a couple of years later. It takes a while to figure out who you are.

How did getting to know and touring with Margaret Cho in 2006 help you find your voice?

I consider Margaret one of those people who’s an absolute truth-teller on stage. She’s very raw and open about who she is, what she’s done, what’s she’s seen, how she deals with things. Traveling with her absolutely cracked me open and helped me be more brave about exactly who I was.

I remember saying to her that I was scared to tell LGBT audiences that I was trans, and she’s like “Why? These are your people!” But I’m like, “I know, but they’re the ones I want to love me the most.” She’s like, “We need representation from the trans community. We really need that. They need to hear your story.” It really changed my perspective because I was like, “I can actually be of service here. I can tell my story.”