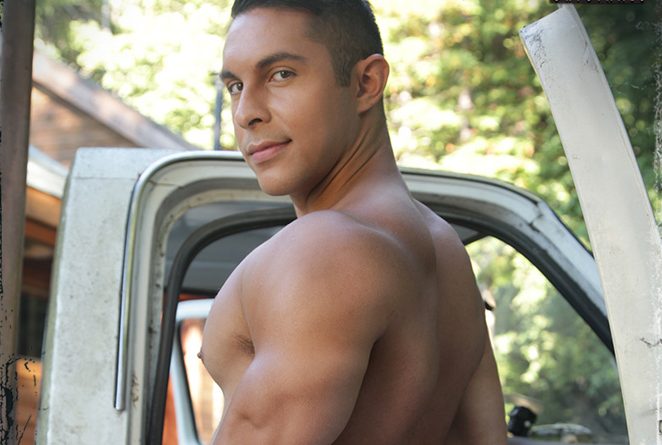 NakedSword Gives You A Frightful Woody with Scared Stiff on Halloween

BeBe Sweetbriar: Thirteen years is a long time for any film script to sit around to see production. How did Scared Stiff finally come about now?

Pam: The first time it was handed to me by Tim Valenti (CEO of NakedSword), he was going into a meeting and I was heading into the bathroom. He handed it to me without saying anything. I’m peeing and reading it, and I’m saying to myself this is fun. I didn’t find out the 13-year story about the script until later. I told Tim, “yes, I’m on it. Let’s do it!” And, Tim is always into doing something new and unique, and stirring shit up in the industry.

Chi Chi Larue: (No one) is making projects like this. It’s perfect to do this kind of movie. Jackie wrote specific characters that were fun to build on. And, it’s clever.

Jackie Beat: I didn’t have any topical jokes in it at the time I originally wrote it, but I thought it would be funny to… well, there’s a part where the guys say Bruce Jenner is really a woman. And, when the phone goes dead, one of the guys says his dad says ‘one day we’ll have a tiny phone in our pocket’ and another replies ‘yeah, and Cher will win an Oscar.’

BeBe:  There is an old 40s or 50s comedy film with the same title. How did you choose the film’s title?

The Cast, Shoot and Release

Pam: We were particular in casting, and the guys were real dedicated to the script. They were invested in not only the hot sex, but the whole project.

Pam: I love Ryan Rose. He’s one of my favorite people to work with. He is so sexy. He’s been with Falcon for about 4 years and he takes the Falcon look/brand to the extreme in this film.

Jackie Beat:  I only suggested one guy to Chi Chi to cast, Jack Hunter. What’s so funny is the thing I like most about Jack is his dark hair and blue eyes, and she took that away!

Chi Chi Larue:  I wanted Jack’s punk rocker character to look like Billy Idol and Jack bleached his hair for the look. Tim (Valenti) was dead set that the costumes were well thought out and perfect for authenticity.

Pam: Scared Stiff is a cross between a comedy, a horror, and a porn movie. It is open to so many different interpretations how it could be shot and produced. One of the things I love about NakedSword is that we stream so many different types of content. We don’t have to hold to a particular look. The script is a bit short and could have been shot simply, but I wanted to push it because we had the most amazing characters. Chi Chi and our on set stylist Johnny Rocket were so great with the styling. Everyone looks exactly their part.

Pam: We generally keep in mind we will release (a film) episodically. And, we try and release the episodes with some kind of cliffhanger so you’ll want to come back and watch the next one.

Jackie Beat:  We used footage from the film for the music video. And when I say footage, I mean when you add up all the dick you have quite a few feet!