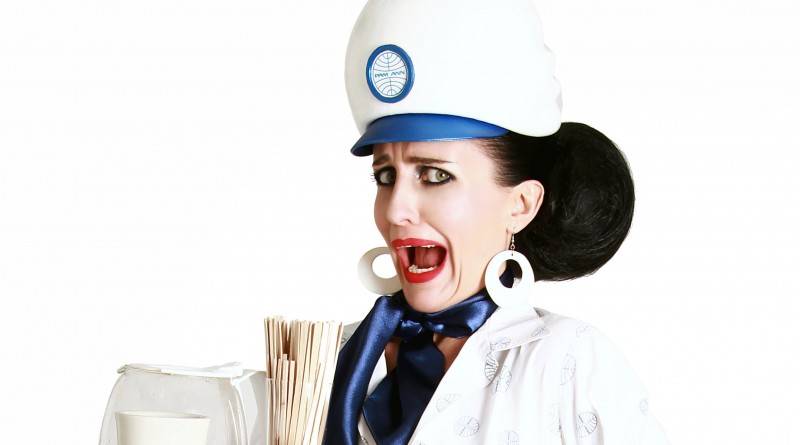 Pam Ann is highly entertaining and funny alter-ego of Australian comedienne Caroline Reid. With Pam Ann, no passenger type nor commercial airline is safe from the type humor even gay icon Madonna says is “cruelly funny”. Reid’s character name is of course a play off the Florida-based airline Pan Am, and she draws from the many nuances and quirks of the biggest international airlines and their media stereotypes. If I had to characterize Pam Ann in a comparison, I would say she is a cross between Dame Edna and Bianca Del Rio. No that’s some funny stuff.

Rarely do we get a chance to peek behind the character to get in the mind of the creator, but in a San Francisco exclusive interview before Caroline makes her way to the City on the Bay for her January 8 and 9 performances at Beatbox, a long awaited return to San Francisco, I visited with the creator of the character who makes flying the friendly skies not so friendly.

BeBe:  In our discussions in the past, you have always made mention to the early stages in the development of yourself as an entertainer, comedienne and actress that your relationship with drag queens had played a big part in that development. Do you consider what you do the art of drag?

Caroline Reid: There are elements of drag in me. I’ve always thought drag queens to be very edgy with putting their opinions on stage because they don’t have a filter. But, I think drag queens are funnier than any stand up (comic). I probably wouldn’t go to one (comic show) any way. I guess my inspiration in the character Pam Ann originally was from that sort of over-the-top, big-mouthed, big hair faux queen. I was always very inspired by queens like Dame Edna. That sort of drag is definitely in me.

BeBe:  You do other characters, but Pam Ann is the one that audiences live for. What was it about your experience of being a passenger on flights that made you incorporate being a flight attendant into your characterization of Pam Ann? Or was Pam Ann more of an organic development?

Caroline Reid: It was completely organic! I didn’t have a fucking clue. I had no basis of flight attendants to fall on. All I want to do is make a bunch of assholes laugh. My passion was in fashion, I went to school for fashion design, but I would always be the person stapling and gluing projects together (very drag queen-ish). They would always fall apart. I wanted to do it, but I guess my heart wasn’t really that into it. But, I have worked job. I was a “gay man” and do display windows dressing mannequins. I wanted to be an actor but hated auditioning. I have fallen on my own life experiences to develop my own schtick. It was all organic and a challenge for myself to just get out there and do all the clubs and stuff. I don’t quite fucking know what I do to be honest with you! After 20 years, I still haven’t quite figured it out.

BeBe: Were you a world traveler before Pam Ann came along?

Caroline Reid: I was a fucking islander in the middle of who knows where in Australia. The only holiday trips we took as a family were to the beach which is a two-hour drive in the car. I never really traveled at all.

BeBe:  Who incorporate many passenger types, both good and bad, in your act. How would you characterize yourself as a flying passenger?

Caroline Reid:  I’m very low key. I’m usually very drugged on Xanax and trying to get away with getting another drink because they a very strict on all that. Because you can never find the crew when you need a drink, so I am always getting caught sneaking from the beverage cart. I like to get to the airport early when I’m flying, so I may arrive a couple hours early. So I will be at the bar having (cocktails) and before you know it I have had about 8. I thought it was like 2. I’m just shit-faced on a flight.

BeBe:  Over the years you have worked with or been involved with, in some way, many people we consider to be icons like Cher, Elton John and Madonna is a huge fan of yours. How do you take all that in when celebrities/entertainers of that caliber have such a great response toward you as an entertainer?

Caroline Reid: Well, with the whole Cher thing (accompanied Cher o one of her many Farewell Tours), one of her managers saw my show. That’s how that all panned out. When he approached me about joining her show, I said “you mean Cher the tribute act, or Cher, Cher?” He said the real Cher. I didn’t believe him. I mean could put any of them (impersonators) on stage and they would still think it was Cher.

BeBe: It has been a long while since you have been to San Francisco, and you will be returning for a couple of nights, January 8 & 9, at Beatbox. But because it has been several years, you have a whole generation of gay folk out there who have become of age since then and will be introduced to Pam Ann for the first time. Does that give you motivation to keep doing what you do?

Caroline Reid: I love performing there. And, I think the show has changed a lot since the last time I was there. It is a bit more me (Caroline). It is more improvised. Many people have been saying that. I have been really enjoying it. It has layered me as a performer. Maybe one-day Pam Ann can fuck off for a bit, and Caroline emerge, but that would have to happen organically. But that’s the direction that it feels that it is going. Once you get out on stage it is like a drug. My passion for it all is what motivates me.

BeBe:  You have done television some time ago in Australia and Europe (The Pam Ann Show, Project Runway UK, Britain’s Next Top Model), but I’m sure many TV execs had a hard time determining what to do with someone like a Pam Ann character on TV. Now that so much has changed in the content we see and who is delivering it, do you think there will be new opportunities for you back on television?

Caroline Reid:  My writing partners and I have pitched some TV stuff last summer in Los Angeles, but HBO said it was too experimental. We got responses from networks like Showtime and Netflix, but I’ve gone back to the drawing board to try and figure out, again, what the show exactly is. I think you’re right. I think my problem has been people don’t know how to put me on TV. I don’t even know how. I know how to put me in a movie, but with TV, I not sure. It’s a conundrum. Again, I always go the organic route and if feels right, like I do with everything I life. I’m not going to push anything because if it doesn’t happen it wasn’t meant to be.