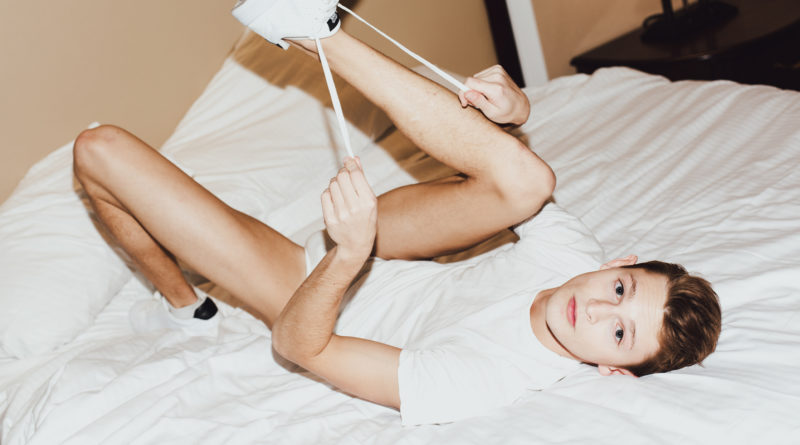 Garrett Kinsley has only been in the adult industry for a year and a half, but in that short time, he’s been so prolific in his work and popular with fans, that Helix Studios is already releasing a DVD collection of all of his top scenes.

“This collection showcases my best scenes, but they’re definitely not my last!” he clarifies. He confirms that he has plenty more to do in adult film, including promoting his latest films, Helix Academy Wrestling and Let’s Hit It!.

“There are lots of unexplored scenarios and kinks that I want to expand on in the near future. One goal I have before leaving the adult industry is to write a film script. Writing is something that comes easy to me and having my story put into action would mean the world.”

“Paris Hilton once said, “If you’re not having fun, then leave,” he continues. “That’s my attitude in life, too. Right now, I’m having lots of fun.”

We spoke with the film star from his college dorm. 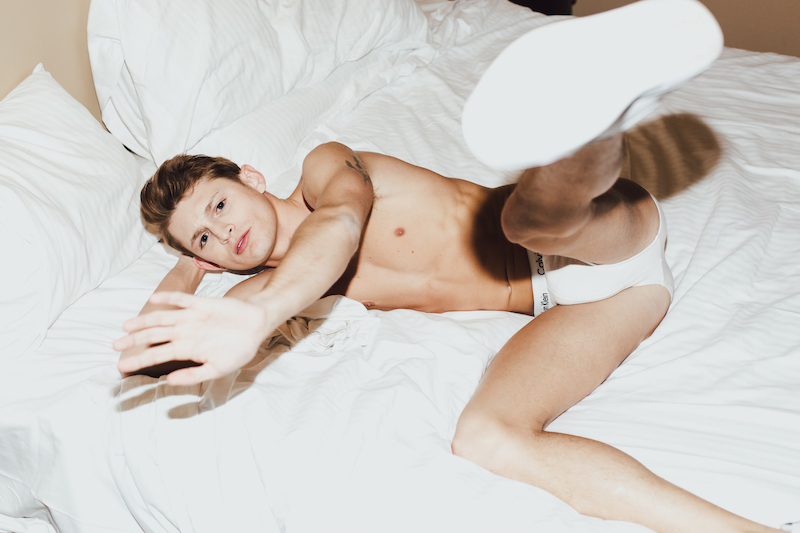 Do you have the support of family and friends?
I have a great support system. My mother and brother think it’s so cool that I live life by the beat of my own drum. My father doesn’t know what I do, but his goal as a parent was to raise his kids to chase their dreams, choose happiness, and be financially stable. I would say he was successful in raising me.

Where did you grow up?
I was born in Fort Worth, Texas, but I spent most of my childhood in small town Tennessee. I came out when I was fifteen.

Did you date in high school?
Yes. I had my first boyfriend when I was seventeen. Our most memorable date was camping on a plateau that sits above mountains overlooking the rolling hills of North Carolina and Tennessee. It was almost like a movie, waking up to the beautiful sunrise with my first high school boyfriend. 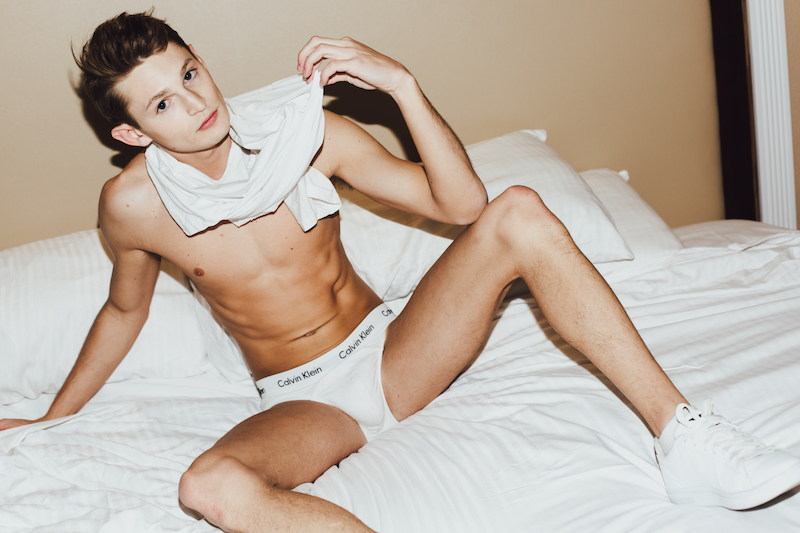 Have you ever dated one of your costars?
Not officially but we did all the things a couple would’ve done without putting a label on it.

Other Helix actors have said it takes you three hours to get ready for a scene. Is that true?
No! I need at least four hours. I don’t know why it takes me so long, honestly. I just get ready, play some music, say my affirmations, pump myself up, and boom, four hours have passed.

Who is your favorite co-star?
I think I have the best connection with Dallas Preston. We’ve had four scenes together and we always feed off each other’s energy. We are also great friends outside of the industry.

Would you date a fan?
Sure! If the vibe is there, I’m down to explore where it can lead, even if it’s just a friendship.

What does Garrett Kinsley like doing when he doesn’t have a camera on him?
I write a lot of poetry because it gives me a way to work through my feelings. I’m currently working on publishing a poetry collection about the struggles I’ve faced as a gay man. The content varies but it’s focused on confronting my sexual trauma, my past eating disorder, and my journey to find solidarity in myself. Other than writing, I like hiking, soccer, and playing piano.

Soccer?
I competed in the 2014 US National Soccer Tournament. Our team made it to the semifinals where we got absolutely destroyed, but it was a huge achievement to make it that far. 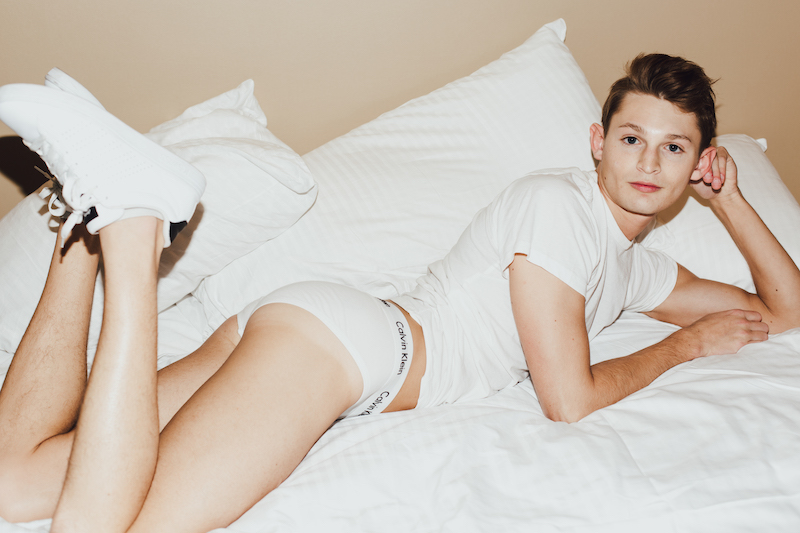 What’s your biggest pet peeve?
When I let someone borrow something and I don’t get it promptly returned. I’m like Mary Poppins because I’m always the go-to guy if you need anything random. I always lend but then I get stressed out my belongings are in someone else’s possession. Just return things when you’re done using them, it’s that simple! If not, I’ll send you a shipping label and a text with an address to send my stuff.

Are you a neat freak?
I am 100% a clean freak. I was diagnosed with obsessive compulsive disorder when I was in middle school. People with OCD are often stereotyped as manic because people don’t understand the motivation for our obsessions. Mine often present from counting things out to satisfy my needs. I do a lot of things in threes, like turn a bottle cap three slight times instead of once, use three napkins, triple-checking my work, or opening the microwave at three seconds left. It doesn’t affect my day-to-day life too intensely because it’s something I’m used to. I often forget I have it until someone asks me why I’m re-opening and re-closing a door three times.

What is something you would like to add to your journal this year?
I have always wanted to go to Hawaii. I know everyone wants to go to Hawaii which makes me not want to go, but I don’t care. I just want to drink my strawberry daiquiri on the beach with tropical music in the background while I wait for the fire spinning show to start. 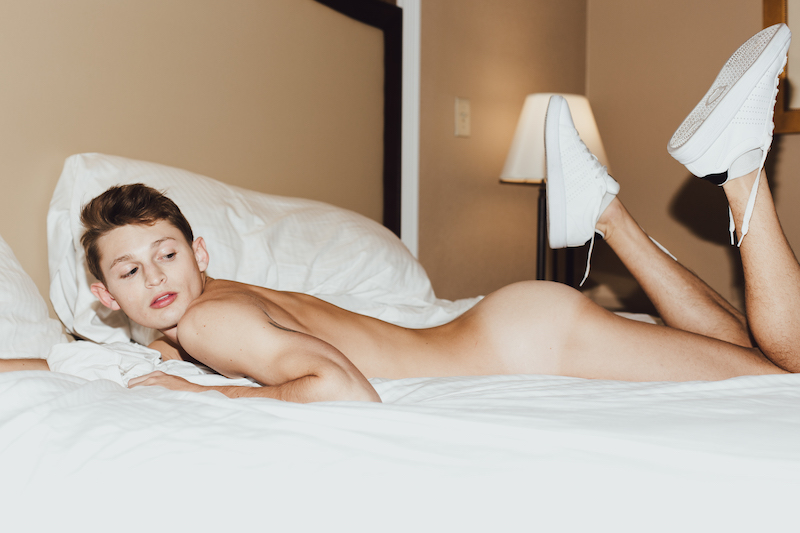 Do you worry you may regret that decision?
Not really. I don’t regret much, except, maybe, how I treated people in high school. When I came out, I felt almost pushed into being that mean, sassy gay that every show about high school students cast. Looking back, I used that as a defense mechanism so people wouldn’t pick on me for being gay, but there are better ways to do that besides being aggressive and scaring people away.

What would you say to young Garrett?
Respect yourself and never forget your worth. You are capable of achieving great things in life. There’s nothing that can stop you from taking the world by storm.

Where do you see yourself in five years?
I see myself making steps towards a better future for all. It would be amazing to still be a part of the industry while I’m established in my professional life.

See more from Garrett at helixstudios.com!