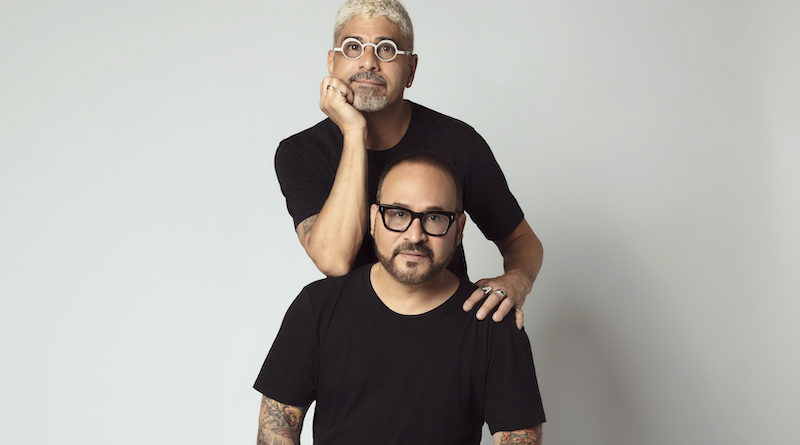 On The Cover
November 9, 2020 Gloss Magazine

“The perfect image should capture the attention of the viewer for at least three to five seconds,” says Angel Cintron. “That is when we know it has made an impact.”

Cintron and his husband, Steve Nava, are the men behind CiNava, one of the leading teams in fashion model photography. The San Francisco duo have become known worldwide for crafting highly produced editorial images that are creative, edgy, artistic, fresh, and often drawn from their own environment. “We notice everything around us,” Nava explains. “People, locations, lighting, colors, wardrobe… We combine them all to develop a story that is told within a single image.”

We caught up with them on the set of their latest shoot with creative director and former judge on RuPaul’s Drag Race, Mike Ruiz.

Shooting male models sounds like a tough job, but someone has got to do it.
Angel: Yes, it’s exhausting! We love the high energy of fashion.

How did you get started?
Steve: Angel began in wedding photography and he would get a gig and need someone there to assist with lighting, holding bounce cards, or someone with a second camera. I was there to help. Essentially, I became free labor. However, it was such a great experience working together, we decided to create CiNava, a fusion of both our last names.

What is the biggest lesson you have learned from working together?
Angel: We have learned to celebrate our successes, no matter how small, and to give ourselves permission to fail. Listen, we’ve made plenty of mistakes along the way to becoming successful fashion photographers. We’ve learned to own the mistakes and to grow from them. We also learned to appreciate that we have one another to lean on.

Do you go prepared into a shoot or do you let the mood and the energy of the day guide you?
Steve: We go into a shoot with a concept or story in mind. There is a definite game plan; but then the environment dictates the scene as we seldom have props on set. On shoot day, the excitement of the studio becomes electric as we engage with the stylists and talent. As photographers, it’s important we keep the energy going to bring out the best in everyone, especially the model.

What keeps you engaged in a shoot?
Angel: First and foremost, the mood and the vibe. Everyone on set needs to have a positive state of mind. They need to be ready to give their all. That is the only way we are assured a flawless, successful shoot.

What if a guy that you are shooting is having a bad photo day or is emotionally vacant? Maybe his dog just died or his partner dumped him. Is there anything that you can do?
Steve: That is a great question! We find that music is a fantastic ice-breaker in most any situation. A simple gesture of asking the model what they want to listen to can go a long way in changing the dynamic of a shoot. If his mood is impacted by the loss of his pet or being dumped by his boyfriend, we’ll throw on some survival music like “I Will Survive” by Gloria Gaynor or “It’s Not Right but It’s Okay” by Whitney Houston.

Who shoots better still images, models or actors?
Angel: It’s a tossup. We’ve come to realize that models have their stock poses for each situation. They can serve the fierce, mad, and sexy looks like no one’s business. Actors are experts in all emotions. They can change from one emotion to another with such ease.

Are male models as big of divas as their female counterparts?
Angel: Female models have certainly cornered the diva market, but male models are quickly learning that tapping into their inner divo is effective as drama grabs attention on and off the set.

Is dealing with demanding agents and pushy publicists a part of the job?
Steve: You know, we really have not had too many experiences with pushy publicists. Obviously, we try to work collaboratively with the talent’s team, but they can’t dictate how we execute our vision for the shoot. I can think of one situation where the publicist did not allow for the talent to wear certain clothing. As a result, we cut the story way short and did not work with the publicist again for any future shoots.

Tell us about shooting the cornfield images.
Steve: The cornfield shoot was so much fun. We encouraged them to use the corn stalks as props, place some of the weeds in their mouth, and do whatever felt natural. The guys got really into it.

What inspired the shoot?
Angel: The inspiration came from our incredible Creative Director, Mike Ruiz. After shooting other projects in studio for two days, we needed to do something different and fun. Nothing says fun like hot men in a cornfield!

What’s next for CiNava?
Steve: 2020 has been a roller coaster for us, just as it has for everyone else. We have no plans of slowing down. We’re super excited about shooting Ed Quinn in the extremely near future. Ed is an actor and musician who has appeared in several film and television roles, including One Day at a Time, Young Americans, and True Blood.

Angel: In addition to more fashion shoots, we’re working to raise awareness for the Equality Federation, an organization that amplifies the power of the state-based LGBTQ movement.