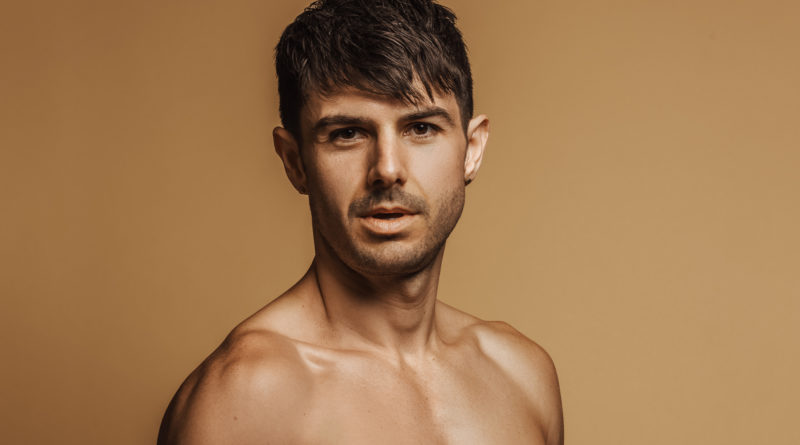 In his new single, “A Part of Me,” Yanni Burton turns the spotlight on his own struggles of letting go and moving on from past relationships “I have a history of getting lost in memories and emotions,” the out Aussie singer admits. “To the point where I become consumed with panic, anxiety and I can’t function properly or move on with my life.”

Produced by Yanni with his close friend Tiger Darrow, the song contains a dreamy, trippy soundscape and is darker and more intense than his previous singles. However, it still contains the pop/dance feel the artist has become known for. “As heavy as the lyrics may seem, I still want listeners to have fun, dance a little, and let loose,” he explains.

He’s managed to keep his spirits up during this time in quarantine with impromptu photoshoots. We spoke with Yanni from his home in New York City.

Who knew pretty people got dumped?
(Laughing) More than once! I often reflect on my failed relationships. So many have ended with unresolved issues that still linger, even after years apart.

Why can’t you just let go?
Who bloody knows! My mind is curious and annoyingly persistent! I get lost and stuck in all these crazy emotions and memories to a point where I can no longer tell if my feelings were even real or not.

Have you ever been accused of scarring someone else?
Umm yes, it’s all about timing, and I had some terrible timing in a couple of break-ups. In retrospect, I’m not sure how I would have avoided that, but let’s say, it was not pretty, and I’m sure there are some battle scars…

You are complicated. How does your fiancé put up with you?
(Laughing) Another excellent question, that I try not to ask him too much.

Is your fiancé the one taking the nearly naked pics of you in the sombrero?
Yes, he is. It’s been our little way to have fun together while in quarantine. Since we really didn’t get a summer this year (which is fine, safety first) I would literally just go outside in it half-naked, scare the neighbors, live my own summer fantasy and he would be there snapping pics.

What is it about the hat that brings out the fierceness in Yanni Burton?
That hat is everything!

Have you always been comfortable in your skin and is that an Aussie thing?
I wasn’t always comfortable in my own skin. Growing up, I was overweight. I would never take off my shirt at the beach, let alone squeeze into a speedo. But once I started to train and take control of how I wanted my body to look, it became a slippery slope, to the point where now I might be too comfortable!

What is your favorite body part to show off?
Um….

Unless you admit it is your bootay, I won’t believe you.
(Laughing) Maybe…

Does your fiancé like to run around in jockstraps, too?
Absolutely not! He’s a close the blinds before walking into the living room nude type of guy. Obviously, opposites attract.

Is that the view off your balcony in NYC?
Yes! We just moved in this year and we love it.

Where were the pool shots taken?
The pool shots, believe it or not, is my office! I have a very kind boss who lets me use the facilities at her home. That same pool is in my music video for my other song, “Worth It.”

Love the bikini photo by the piano.  What kind of music are you working on there?
To say I was working on music would be a lie. I was having a few cocktails and decided to have a sing-along with some friends. If I remember correctly, we were all in various states of undress.

Where do you see yourself going with your music?
I want to get back to my roots as a musician and create more acoustic sounds, with strings, piano, and maybe even myself on double bass. I’ve got a huge backlog of songs that I’ve written and they just seem to fit a more acoustic and heartfelt vibe.

Of all the songs you have released, which best represents you?
It’s hard to say! They all represent me at a specific period of time in my life, but, if I have to choose one that best represents me, it would be “Beautiful.” It’s about my fiancé, its true to my original style of writing and love for acoustic music.

What drives you today and how has that changed from when you first started out?
I think the biggest driving force for me now is the desire to challenge, grow and learn. There are so many reasons not to create, write, and invest in my music, but I know I can always do better and do more, so why not? I think when I was starting out, I didn’t know much about the industry and I was a little intimidated about how to even produce or release music, so I put it off for a while. Now, though, I have a close community of artists that I love to work with, and I think that has been a big driving force and source of inspiration for me to continue to write and create.

Yanni Burton’s “A Part of Me” is available now on Apple Music, Spotify, and all digital platforms. You can keep up to date with Yanni and all his new music on Instagram!