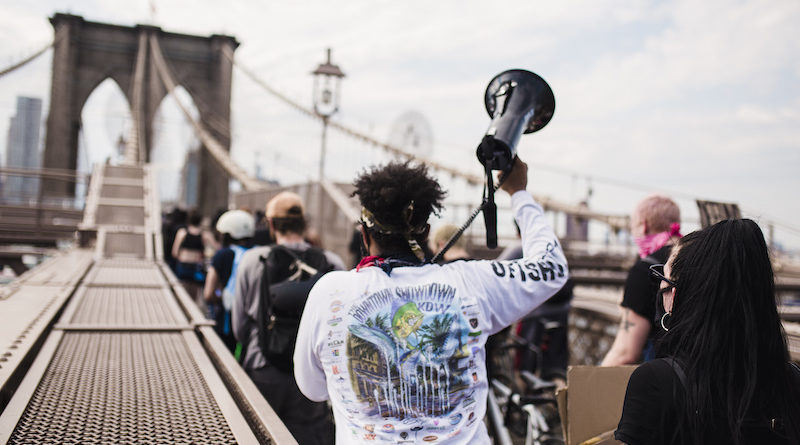 In response to the AIDS crisis, storied advocates mobilized and created systems and structures to save their lives and those that they loved. Then came the birth of HIV service organizations (HSOs). Many of those organizations have undeniable legacies of serving people living with HIV at a time when countless clinicians refused to even touch them. The advocates pushed, kicked, screamed and shoved until the powers-that-be began to respond. And when public health officials responded in lackluster fashion, these public health heroes pushed even harder.

Decades later, numerous books, movies and even plays have been produced highlighting the work done by this collection of individuals who would eventually come to lead or choose the leaders of HSOs. I, like many of my colleagues, have read or seen nearly all of these productions in one form or another. And one thing is clear to me in these biographic pieces: Almost no one looks like me.

Black people are often a footnote in the history of the AIDS movement. One of the first suspected cases of AIDS was in a Black teenager named Robert Rayford from St. Louis, Missouri, who died of what seemingly were HIV-related causes at the age of 16 in 1969—i.e., Kaposi’s sarcoma, pneumonia and an advanced chlamydia infection. Twelve years later, Michael Gottlieb, M.D., was one of the leading authors of a seminal Morbidity and Mortality Weekly Report detailing the symptoms of five white gay men living with pneumocystis pneumonia in 1981. His report led to the beginning of the world’s awareness of HIV. But there were two major omissions in that report: two more documented cases of Black men—one gay, and one a heterosexual Haitian. Thinking back, Gottlieb shared, “I wouldn’t have thought it mattered. But in retrospect, I think it might’ve made a difference among gay Black men.” The misconception that HIV was a white gay man’s disease started from the very beginning.

Today in America, Black gay, bisexual, and same-gender-loving adolescent boys and men are the most HIV-impacted population by scope and scale, according to the Centers for Disease Control and Prevention (CDC). What does that mean within the Black gay community? The HIV response in America has utterly failed this population.

There is daily proof of the failure of HIV, Inc. to service Black gay men. Go into an HIV clinic in most parts of America, and you will see a disproportionate number of Black gay, bisexual, and same-gender-loving men sitting in the waiting room. These are the same people who typically do not see themselves in HIV prevention messaging, on the Gay Pride billboards across America every June, or sitting across from themselves while in the doctor’s offices. Black gay men do see themselves on the front page of newspapers being charged under HIV criminalization statutes or on CDC reports stating once again that they make up the highest number of new HIV infections in the country.

Due to overwhelming stigma, prejudice and systemic racism and homophobia, Black gay men living with and/or impacted by HIV have hurdle after hurdle to overcome. Unfortunately, they are not always successful due to all the obvious reasons. They fall out of care (racist doctors). They don’t trust treatment options (racist researchers). They don’t trust HIV service organizations (racist hiring practices). All of these realities are simply unacceptable.

“It’s your passion and dream job and then you look around the field and Black Gay CEO’s leading HIV / AIDS organizations are far and few between, a reality that is hard to swallow when you look at the disparate impact of HIV on our lives,” says Tyler TerMeer, PhD, M.S., CEO of Cascade AIDS Project. “If we are truly committed to a tomorrow that values all Black and Brown lives and one that improves the lived experience of our Black, Indigenous, and people of color clients and community through health equity and racial justice, then our organizations need to make investments in Black leadership.” For decades, fingers constantly pointed at Black men living with HIV, stating that they were to blame for the systems in which they acquired, progressed, and sometimes died from the virus. Many Black people have been repeatedly admonished for not utilizing available resources to prevent and/or treat HIV. Thankfully, those days of victim-blaming are coming to an end, albeit way too late for way too many. Those storied HIV organizations that have existed for over three decades have been successful at turning the epidemic around—for white gay men. But they have historically failed Black people. Larry Scott-Walker, co-founder and executive director of THRIVE SS, has been offering solutions for Black gay men since 2015, geared toward turning the epidemic around. His organization has received international attention for successfully providing culturally responsive services to primarily Black gay, bisexual, and same-gender-loving men in metro Atlanta.

“When Black gay men are not included in the C-suite, the efforts of an organization lack the cultural reflection and responsiveness required to adequately address the needs of Black people and ultimately end up doing more harm than good in these vital communities,” he says.

Changing the system is easier said than done. The best-funded HIV service organizations have two things in common: 1) their C-suites lack Black gay men or even Black people of any gender identity or sexuality, and 2) due to their white leadership structure, they have increased access to capital. You will often see at these same organizations Black gay men tokenized to serve as outreach specialists or program managers for services exclusively focused on Black people or other racial and ethnic minorities. As one executive director, who asked to remain anonymous, shared, “Most HIV organizations only want Black people as their building’s decoration and not as the support beams.”

Within Black communities, certain organizations are very well-known for their anti-Black hiring practices, work culture, and subsequent abysmal treatment of clientele. Black people who work in HIV at all levels have stories of real harm that’s occurred. Black employees are often made to keep quiet about these issues for fear of being seen as a troublemaker and “hard to work with” and therefore become unable to work anywhere in the field. Livelihoods have been destroyed, and some talented and committed people have left the field altogether. Some of the offending agencies have even had Equal Employment Opportunity Commission (EEOC) complaints filed against them, and the findings have landed on their desk. Without fail, the same routine follows those findings:

Fast forward to one year later, those same organizations still lack any Black people in executive leadership; the director of diversity and inclusion has resigned; and disgruntled Black staff and clientele hope for a better day.

“Black gay men must be in the C-suite to remove the cloak of invisibility,” says Stephen Lee, M.D., M.B.A., executive director of NASTAD. “HIV organizations that live their values aggressively also recruit and support minorities and LGBTQ+ leaders to make our communities and workplaces stronger, more creative, and resilient. They actively create seats at the leadership table for difference, innovative solutions, and diverse perspectives. Without this, they are doomed to a culture that stifles different viewpoints and voices.”

Successful HIV service organizations that are doing the necessary work to support the communities disproportionately impacted by HIV have been able to create an equitable business model, starting with their board of directors through the executive team and their staff. Through intentional design, HIV service organizations such as TruEvolution in Southern California have been able to sustainably engage the very “hard-to-reach populations” that other agencies have failed to support.

“As the world becomes more complicated and health disparities layer themselves deeper in our culture and community, Black gay men are the critical resources to the leadership of the HIV movement,” says Gabriel Maldonado, M.B.A., CEO of TruEvolution. “Our roles are to not only implement programs and execute services, but to stay connected to the community and generate solutions that speak to the culture, history, and language of the people we serve. As embedded and trusted community members, we are best able to address our interwoven and unmet cultural needs.”

In reference to the rhetoric about Black same-gender-loving men, David Malebranche, M.D., M.P.H., once famously stated a general response to white HIV researchers and administrators: “They are not a hard-to-reach population just because you do not know how to reach them.”

At this exact moment in the story of America, we are seeing non-Black people pay more attention to the systems that have endangered the lives of Black men from a variety of angles. In response, we are seeing many industries, including the field of HIV, begin to do a deeper level of self-reflection on their role in perpetuating a world that sees Black men die earlier and with less support than their peers. And we are also seeing numerous HIV-focused agencies releasing #BlackLivesMatter statements.

But let’s be clear. The Black community does not want hollow words written on the screen. The community wants to see the receipts. We want to see who is sitting on your board of directors and who is sitting in your C-suites. If those people do not look like the epidemic in your community, change must come. And come now.

Ace Robinson is a leading HIV advocate and population health expert residing in Los Angeles. He is a board director of the Avielle Foundation, which combats violence through brain health research, and a co-chair of the LA County HIV Commission’s Standards & Best Practices Committee. This column is a project of TheBody, Plus, Positively Aware, POZ and Q Syndicate, the LGBT wire service. Visit their websites – thebody.com, hivplusmag.com, positivelyaware.com and poz.com – for the latest updates on HIV/AIDS.