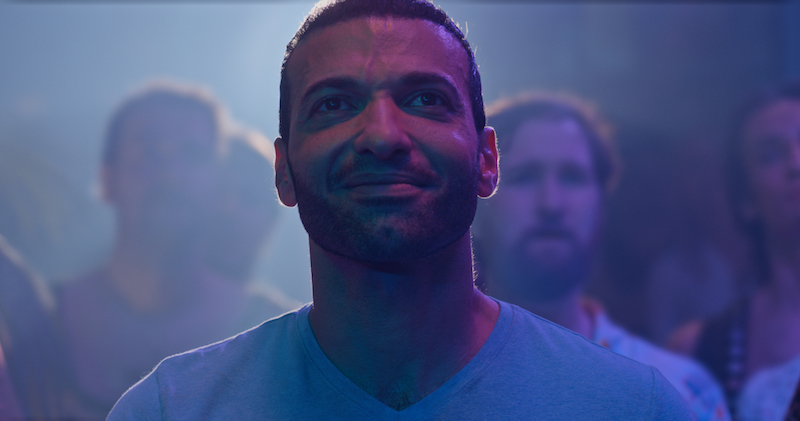 Actor Haaz Sleiman is on a mission to take part in stories that broaden the pool of queer perspectives on the screen. And if you already know his work, you know he’s on a roll.

For “The Son,” an episode of Apple TV+’s acclaimed anthology centered on the immigrant experience, Little America, Sleiman portrayed a gay Syrian refugee trying to gain asylum in the United States after his father brutally condemns him for kissing a man. Sleiman must be doing something right: The episode has been banned in 10 Arab countries and in Russia.
Then, in writer-director Mike Mosallam’s indie rom-com Breaking Fast, which is currently seeking wider distribution while also making its virtual Pride rounds this summer, Sleiman plays a gay Muslim Arab navigating life, love and loss in West Hollywood during Ramadan.

But the queer storytelling mission that’s so important to Sleiman, who has also starred in Nurse Jackie, 24, Veronica Mars, The Good Wife and Jack Ryan, will reach towering heights when he plays the husband of gay superhero Phastos in Marvel’s The Eternals, due in theaters in early 2021.

Here, Sleiman talks about telling stories that are long overdue, how Madonna’s sex-positivity influenced him as a gay man, and why he makes a convincing straight guy onscreen. Azzopardi: After “The Son” aired, what kind of feedback did you get from LGBTQ immigrants whose experiences were similar to Rafiq?

Sleiman: I am so grateful for amazing, positive feedback on Instagram, just comments thanking me and saying they felt seen. The importance of what we do, and storytelling and television itself, is that you can feel like if your story is being told, you matter somehow. It was really just very gratifying.

By the way, the lovely gentleman I got to portray, Shadi Ismail, was floored by how it came out and felt it was exactly what he went through. He was in tears. So, for me, I’m just very happy with the way it came out and how LGBTQ people have been receiving it. This is a story that should’ve been told a long time ago; it’s long overdue. We’re finally getting it, and I really think it’s about time.

Regarding representation, who did you look up to as a gay boy who grew up in Lebanon?
Great question. I grew up in Lebanon in the ’80s – there were a lot less options. And also, I was in Lebanon, so it’s even more limited there. So just one word: Madonna. She was really it. Now, in all my interviews, Madonna comes up. (Laughs.) But she was that for me. She really represented hope for me. She was really the first person who actually told me that I was OK, that nothing is wrong with me; she gave me hope that, yeah, I can actually have a bright future for myself, and I can get what I want, and that there’s nothing wrong with that. As a gay kid, I really loved strong women, and so in that sense it made sense I looked up to her. I was inspired by her and really, honestly, if I didn’t have Madonna in my life as a child I don’t know if I would’ve been able to survive. In “The Son,” Rafiq’s friend, Zain, is a Kelly Clarkson fanboy and finds comfort in her song “Breakaway.” What’s a song that kept you going during your time as a gay man living in Lebanon?

I was a very interesting child, I guess you could say. An old soul. So I always heard people being like, “What’s wrong with Haaz? He needs to be like normal children. He needs to play with children.” I never understood that. I felt bad about that. The reason I’m saying all of that is because it also applies to what I’m about to tell you.

I think I was kind of sophisticated in the sense that I really was a feminist when I was a kid. And I don’t know why but I really had a strong empathy for women. I really cared about them. Whenever I would see that women are not treated fairly or equally, it really upset me. So, for me, the songs that really moved me and affected me are when Madonna would sing lyrics about doing things that women are not supposed to do, and her breaking the rules and her being so rebellious in the sense that, yeah, I’m gonna have sex with this guy and I’m gonna be so happy about it and I’m not gonna feel any shame the next day. Whenever Madonna was equal to men, whether it’s in her lyrics, in her music, that’s what really empowered me because I saw, through her, that I can be like that as a gay man. That’s really what inspired me and empowered me the most.

I would say a lot of her sexual songs do that for me. I’m a very sexual person and I’m a big flirt and it’s just something natural for me; it’s second nature. So I flirt with women, I flirt with men; it doesn’t matter. And, for me, anytime she was free and uninhibited in expressing her sexuality in her songs that was very empowering, because in Lebanon and in most Arab countries sex is a shameful subject to talk about.

You’ve been open about being, as you’ve said, a “total bottom.” But at the same time, you’ve acknowledged that being so sexually transparent could hinder you career-wise. Why do you think that would affect your professional life? And has it? Before you officially came out in a video posted to Facebook in 2017, you were asked about your sexuality by The Advocate. How do you reflect on denying being gay in that interview? Do you feel public figures have a responsibility to be out if they’re LGBTQ?

Of course when The Advocate asked me about my sexuality it was awful. I really struggled afterwards because I lied. I said I was straight. I betrayed myself. I betrayed my fans. I betrayed the people who admire my work. I also felt I was a hypocrite. That really ate from the inside. That, combined with the evolution of it all and all the different shows, like RuPaul’s Drag Race, and the massive killing of trans women of color, all of that just made me finally come out.

I don’t know. After many years of lying and not coming out and just basically disrespecting myself and betraying myself, it’s clear to me today that, whether you’re a public figure or not, the most important thing is to really live your truth. Be authentic. And that applies to anyone. It doesn’t matter who you are or what sexual orientation you are. That comes first. And then after that everything else falls into place. My favorite artists in the world are all authentic and respect who they are. The ones I look up to, they’re all an example of that.

You’re a lead in Mike Mosallam’s feature film debut Breaking Fast. How does that movie fall in line with your goal of centering queer stories that typically aren’t told?

I think the majority of the world is not aware that there are openly gay practicing Muslims. I’ve had so many conversations about this with a lot of gay and queer people. My friend is an openly gay practicing Muslim. They exist. And there’s a lot of them. So this film simply is making those people visible, no different from how finally the world is making trans people visible because they were not visible for the longest time. Now, finally, they’re seen. The internet was thrilled to hear that you’d be sharing a kiss with your husband, Phastos, in Eternals, the first Marvel film to feature a gay married couple; they will also be raising a child. What did it feel like to witness the excitement around such a historical moment in pop culture for the LGBTQ community?

Marvel is purposely and intentionally trying to put out a positive image of a queer family for the whole world to see, from kids to old people. That’s huge. Visibility at a level that is unprecedented. We got to humanize a queer family who have a son, and we got to really show how loving queer families are.

I actually even believe that queer families are healthier than straight families, and I really think their journey shows that in a beautiful way. So I’m very proud that I was a part of it. I’m very grateful that I got to humanize a queer family on a global level and I can’t wait for the world to see it. And I think what The Son did was also revolutionary. For women, for LGBTQ people, and for other marginalized people and ethnic minorities, there’s a movement happening; there’s an elevated level of consciousness, globally speaking.

And you asked me, “Do you think coming out is gonna harm my career?” I’m excited to see what’s gonna happen with that. Meaning, I’m excited to start seeing openly gay actors play straight. I would be excited to play James Bond, for instance. And by the way, I’ve had some training in Lebanon. When I was a teenager I really had to sell it to make people think I was straight. I had to have a girlfriend, I had to befriend straight boys to look like a badass. I really pulled it off. The reason I’m so convincing playing straight roles is because I did that in Lebanon with my family.

And you’d play a straight James Bond, not a gay one?

I would play a straight James Bond because I think it would be a big statement that an openly gay actor is playing a straight iconic figure. That’s more challenging for the world. I think, for me, I’m interested in playing the roles that would challenge the world’s thoughts and perspectives about each other. That’s the most important thing for me: to really change the conversation.