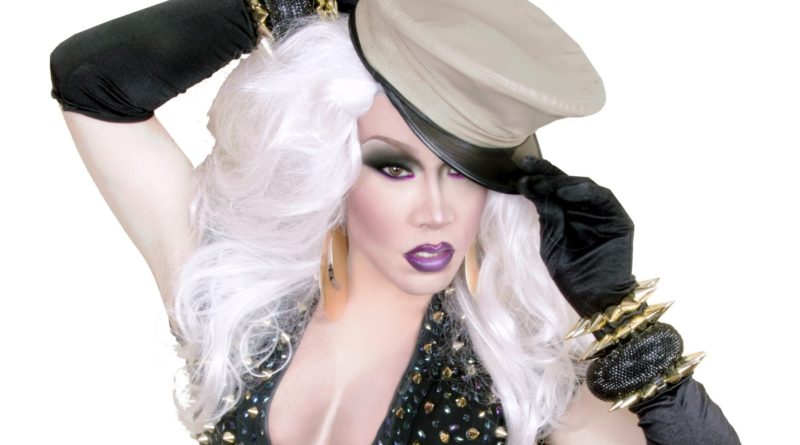 Riddle me this. Riddle me that. Watch out girls, this bitch is back… in San Francisco! Drag legend Phi Phi O’Hara is coming to the Bay Area for the new Peaches Christ “Gremlins” parody and we got a chance to catch up with the cosplay icon before her Peaches debut.

When they’re not tweeting about Pokémon or what Pop! Figures they received in the mail that week, Phi Phi is busy wowwing us with their intricate cosplay looks on Instagram. Phi Phi spent all of 2016 doing their 365 Days of Drag project, where they posted a new dragged-up look every day. More recently, the drag chameleon just finished their 31 Days of Wizardry series where they transformed into a different “Harry Potter” character for each day of October.

Now the drag artist is getting ready for their first ever Peaches Christ production. Later this month, Phi Phi will star as Greta Stripe Gremlin in the “Gremlins” parody, “Femlins.” They will also be joined by fellow RuGirls Miz Cracker and Detox, along with Peaches Christ herself, for the live stage show.

We caught up with Phi Phi to talk about their obsession with Pop! Figures, how long it took to create their Harry Potter photo series, and their connection to the 1984 classic “Gremlins.”

Cammack: How many Pop! Figures do you have at this point?

O’Hara: Ok, so no joke right now, I just got home. I’m literally opening packages right now and opening all the Pops! I got over the weekend from not being home. So it’s a problem. (Talking to his husband) Babe, how many do you think we have? …We have over a thousand.

You’re in New York right? How do you have room to manage and display all of them?

(Laughs) They’re in closets and cabinets. I do have a big display that holds a few hundred, but they’re everywhere in the house. In the bedroom. On the side of the bed. They’re everywhere. I really do need to cut back.

You’re a huge Pokémon fan. With “Sword” and “Shield” coming out, which starter are you going to select?

Grookey. I was going to do Scorbunny, but after I saw the final version, I was like, “Naw.”

I actually do not. The left arm is all Pokémon and the right is going to be my Tim Burton sleeve. So my next tattoo I’m planning on doing is for Tim Burton. If I did anymore Pokémon stuff on there, I kinda want my shibas, my dogs, coming out out of a Pokéball. I’ve been wanting that for a long time, but I forget to do it and now I’m running out of space.

Can you take us behind the scenes on what made you want to do your “Harry Potter” series? How long did it take to plan and actually put the looks together?

I started in August when they invited me to the Harry Potter London tour, which is behind-the-scenes of the actual movie sets. When I did that and I was going through all the details of all the clothing I was like, “Oh, this is really cool.” Then when I was talking to all the employees there they gave me a free gift and asked if I could do anything with it.

With the wands I could do a photo series. I wanted to wait to do a photo series after 365 Days of Drag. If I did another photo series, it had to be bigger and more detailed than what I did for 365. I started in August with ordering fabrics, hair, and prosthetics that I would need for each character… I started shooting in September. The last week though, that was all done day to day.

Were there any “Harry Potter” characters that you wanted to do for the series but weren’t able to for some reason?

Yeah, I wanted to do Fawkes. I had the prosthetic on and everything. I was gluing feathers to my body and I hated it so much. My husband took all the photos and I remember just getting ready in the bathroom and walking into the room and I’m like, “We’re not doing it. Fuck it! Take it down. Take down all the backdrops.” …I wanted to do the mermaid. I didn’t get to do her. I did most of the ones I wanted to do.

You’re going to be in Peaches Christ’s upcoming show “Femlins.” What’s your history with the Gremlins movie and do you remember the first time you ever saw it?

I love “Gremlins”. Obsessed with it. I have all the “Gremlins” Pops! …When I was younger, because my eyes are so big, everybody used to call me Gizmo. And because I’m short and everything, that was my little nickname. I’m really excited to play Stripe in drag. That’s gonna be fun.

If you could team up with Peaches Christ for another movie parody, do you have any idea of what would be your perfect parody to do on stage?

Oooh… oooh… I mean “Harry Potter” would be a great one I think. That would be fun. There’s so many characters, I don’t know how she would do that. It would be a lot.

Back in 2014 you posted your Greta Gremlin look. In the post you said it was your first time using body paint and prosthetics. Obviously with your cosplay, Harry Potter, 365 Days of Drag, you’ve done a lot more.

Are you self-taught with making prosthetics or do you get them made for you?

It depends. There’s a company in Canada that during 365 Days of Drag made the “My Little Pony” prosthetics and we stayed in contact ever since. If I need something and I’m out of town so much that I don’t have time to do it, they usually just make it for me and send it. Everything else, yeah, I taught myself. I need to learn more techniques, but I can do the basics of prosthetics.

For Jiggly’s music video for “Ratchet Christmas,” we needed these hair styles and it was a really late night. She called me at like 12 o’clock and the shoot was at 6. She was like, “I need these outfits made!” She came over and I had to make these… Have you seen “Baps” with Halle Berry? In it they have these huge hair pieces that are woven like baskets. I didn’t have anything to make the circle. All I had was a bleach bottle so I had to use the bleach bottle and wrap hair around it and wear it on my head.

The second anniversary of Queens United just passed and I’ve been seeing you post about it on social media. Is there going to be another Queens United event?

There is another one happening and I’m so excited! I teamed up with Drag Out The Vote. We’re going to do a tour around America – I think mostly red states. We’re going to do a drag show and set up to register voters and get people out there to vote. It’s going to be a bunch of drag queens. There’s five of us that are set right now? We’re still adding girls. The first one will be in Minneapolis and that’s gonna be in January. We haven’t announced the date yet, but it’s funny, I just approved the flyer right before you called.

(Since this interview took place, Phi Phi has announced the Minneapolis Queens United event with Drag Out The Vote and Flip Phone Events will take place on January 28. The event will be hosted by Ginger Minj and feature at least 15 famous queens including Monét X Change, Trinity the Tuck, Wendy Ho, and Sherry Vine.)

Tickets and more info at PeachesChrist.com!