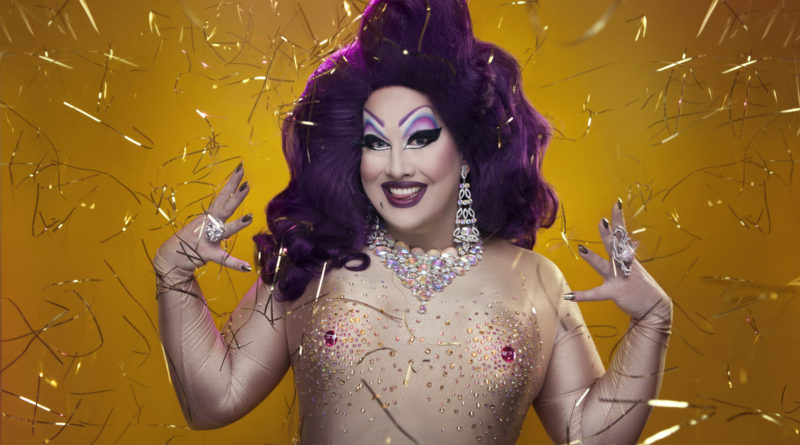 Move over Gizmo! It’s Jizmo’s turn in the (hopefully not too bright) spotlight!

This December, the horror comedy classic “Gremlins” is getting the Peaches Christ treatment in the new drag parody show “Femlins.” Written by Peaches and Michael Varrarti, this holiday show is amping up the original 1984 movie with A-list drag talent and all the padding you could ever want.

Peaches has already rocked the Castro Theatre this year with parodies of classics like “Mean Girls,” “Bring It On,” “The First Wives Club” and “Fight Club.” She’s ending 2019 with this femmed-up “Gremlins” parody and has enlisted “RuPaul’s Drag Race” alumni Miz Cracker, Detox, and Phi Phi O’Hara for the special event. Migiette Nielsen also joins the cast as the beloved Mogwai, Jizmo.

I was lucky enough to chat with Peaches and talk about BenDeLaCreme inspiring her to do a “Gremlins” show, the effects of Heklina leaving San Francisco, and when she’s going to parody of the greatest film of our time: “Sister Act 2: Back in the Habit.”

Cammack: So I’m gonna start off with a super selfish question. When are you doing “Mister Act 2?”

Christ: (Laughs) God, that is a really good question. Yeah, it’s so funny. Possibly 2020, because it is on our list… We have definitely discussed it multiple times. There’s some sequels where there’s a fan base as strong for a sequel as there is for the original. I would say “Sister Act,” as well “Addams Family,” have those sequels where the second one might have just as big of a cult or moreso. Let’s say 2020 – I’ll call Latrice.

In your process of selecting movies to parody, what made you want to do “Gremlins” as your new project?

It’s funny, because I knew that finishing a big, haunted attraction (The Terror Vault) kinda takes over my life… The regular routine for us was to do a show the weekend before Thanksgiving and not really compete with all the holiday shenanigans. There’s so much competition and every drag queen is doing a show. The reality was I could not pull a show out of my ass that quickly. It would just be too much for my team and for me. We knew we had to do a holiday show this year or just not do a show. Which, you know, our last show was in July; it was “Bring It On, Queen!” So to not have another show at the Castro for the rest of the year felt like a bummer.

I knew that we were going to do a holiday show and I started throwing out holiday show ideas while I was in London backstage with Jinkx and BenDeLaCreme… I was saying, “What do you guys think about ‘A Christmas Herstory.’ You know, instead of ‘A Christmas Story.’” And I swear to God, Ben rolled her eyes. I was like, “Wow, that’s so rude.” Then I said, “What about ‘Homo Alone.’” And actually both Jinkx and Ben thought that was a good idea. Then it was Ben, I have to give her full credit, was like, “The best Christmas movie ever made was ‘Gremlins.’ You should do ‘Gremlins.’” I don’t know why I hadn’t thought of that, but it was Ben who put the idea in my head. Then I said, “Well if we did that, we’d have to call it ‘Femlins.’” It was like, boom, there is was. The rest is history… Well we’ll see. I don’t know. We’re still putting the show together!

With casting “Femlins,” I know Phi Phi may have been a more obvious choice because she had that viral Gremlin drag look a while ago – but what made you want to cast the RuGirls that you cast?

I like playing with people’s own cults or their own personas. I really liked seeing Phi Phi on “Dragula.” I feel like she’s such a great cosplay artist and has done some really interesting things since “Drag Race.” On the show, she was a villain. She was portrayed as a villain. She kind of relished being a villain in some ways. And then when she did that amazing Greta Gremlin – and it was the same year I did Great Gremlin and so did Yara Sofia and a bunch of other queens – I had to hand it to her. It was just so flawless and gorgeous that when thinking about who should the ultimate villain be for “Gremlins,” I can honestly say Phi Phi O’Hara was my first choice. I’ve been wanting to do a show with her for a while and this just seemed like the right time.

Detox has been someone I wanted to work with for a while. I actually offered her a part in another show, but she was unavailable… I was thinking about who could play Miz Cracker’s mom. I’m doing a lot of mashing up of characters for “Femlins.” Michael Varrati is the co-writer with me and we just realized to make it “Femlins,” we’re feminizing everything. The mom and the dad character are one; being presented as a mother. The Phoebe Cates character and Billy are one; being presented as Miz Cracker. I just thought that was a strong cast. And I have to say, I really try to cast people that I think are going to be able to show up and put on a good show. I really believe that this cast is going to be very strong.

When selecting movies, has there ever been a movie you really wanted to parody on stage but couldn’t figure out a way to adapt it?

Yeah, I think there are movies that I really love or that people have suggested that I, for whatever reason, might not be comfortable with. Maybe because they’re too special effects heavy or maybe because they are serious in nature. Just because something become cult doesn’t mean it deserves or should have a drag parody. Bob The Drag Queen has suggested and asked me to do “The Color Purple” for years and while there is a cult response to that movie and we all love the lines and know how fabulous that movie is – it’s such a great movie – I honestly don’t feel like Alice Walker or the film deserve a drag parody… At least by me. It’s not my place to do that. There are some like that where it’s like, God, I love “The Color Purple” but that’s not right for comedy. Where something like “Silence of the Lambs,” which I guess you could argue is serious in nature, because of what the content is, because it’s so ludicrous and camp, I felt very comfortable doing that.

With “First Wives Fight Club” you combined the plots of two movies and you like to throw in elements of other movies. Like in the “Spice World” parody you threw in some “Rocky Horror” at the end. Do you have any plans to do any more combo movie parodies?

Even when they’re not titles as obvious as the “First Wives Fight Club,” if I think something will work to kinda reference or overlap – like our “Mommy Queerest” show that Heklina and I do has a lot of refereneces to other gay classics… I really like that in the world of parodies and in the universe of queer appropration of these things that we love, we can also fold in other things.

For example, in “Femlins,” I’m playing the Mrs. Deagle character; who is the nasty old lady that wants to take the dog away. So of course I’m working in a bunch of dialogue from “The Wizard of Oz.” Basically that scene is “The Wizard of Oz,” so I’ll play it as the Wicked Witch. And I love that, because our audience will completely get that. And the people that don’t, I would say you’re just not queer enough!

And speaking of Heklina, with her spending less time in San Francisco, does that mean you’re going to cut down on the Heklina jokes in your shows?

(Laughs) No, absolutely not! Her hideous reputation will last far into the future. It’s funny, I think that the response to her announcement was kind of amazing. I think people really interpreted it as though she were retiring. While I think she’ll spend more time in Palm Springs, aside from her involvement with Oasis, I don’t think we’re gonna feel the loss of Heklina. I think we’ll feel the loss of Heklina at Oasis for sure. That is a big loss. For the last five years, Oasis for me and many people has been a silver lining. What they were able to pull off and what I hope they continue to do is really a silver lining for queer culture in a city that radically changing in ways I don’t necessarily appreciate. So I am bummed that she’s leaving, but no one can blame her. She has worked her ass off. I do think that you’ll see plenty of Heklina in San Francisco for years to come.

I’m sad about Mother going away. That’s one of the best weekly shows.

Going back to the creative process, when you pick movies to parody on stage are you only picking movies you’re familiar with or do you ever pick stuff that’s brand new and you have to watch for the very first time?

In the early days, they were all my favorite movie and they could be way more cult because we were doing the shows at midnight. There weren’t streaming services so the movies weren’t as readily available. So they were all movies that I loved. When we moved from the Bridge Theatre to the Castro Theatre, moving from a 400 seat house to a 1,400 seat house, it really did change the ways I programmed or created projects. They had to be popular enough to justify the expense of doing them at the Castro Theatre. That’s why as I get older I need to speak to young people and ask them, “What are your favorite movies? What did you grow up watching over and over again? What’s a cult movie for your generation?”

Luckily my drag family contains younger people like Jinkx Monsoon. She often advises me. It was really Jinkx who said, “You really have to do ‘Hocus Pocus.’” I mean, I had seen “Hocus Pocus,” but I was like, “That’s not a good movie. What are you talking about?” So even though I had seen it, I was in my early twenties. I was too cool for it. I didn’t grow up watching it. I rewatched it as an adult and I realized when I rewatched it through the lens of a young queen who grew up watching it, I was like, ”Ooooh! I get it now!” This is drag! This was their introduction to drag! This was their Elvira. I grew up watching Elvira! They grew up watching “Hocus Pocus!” This is Bette Midler doing drag. It’s so clear; it hit me over the head. Then I knew I could do a parody of it. I knew how to appreciate it and see the value in it, if that makes any sense.

Tickets and more info at PeachesChrist.com!