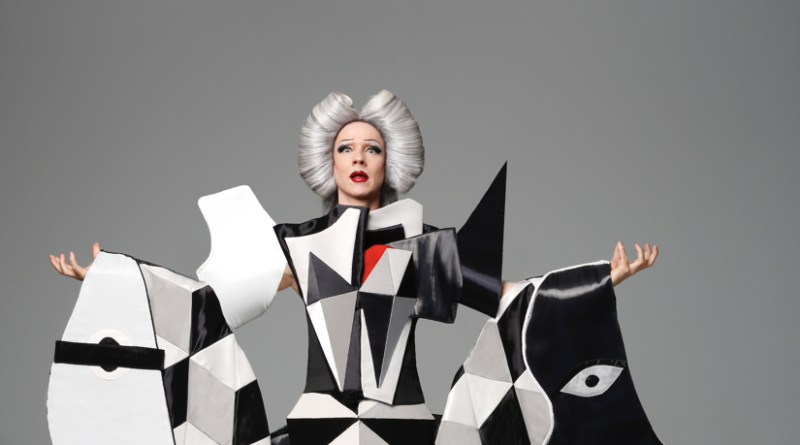 You very well may have uncovered a truer you thanks to John Cameron Mitchell. Maybe it happened while you were experiencing some kind of divine queer intervention through soul-searching heroine Hedwig Robinson, who comes into herself after making the most of a botched sex change in one of cinema’s greatest slow burns, “Hedwig and the Angry Inch”. (The project only became lucrative for Mitchell as a Broadway smash 13 years after his indie cult film premiered in 2001.) Or maybe the real queer sex in 2006’s “Shortbus”, which took shame out of human sexuality, stimulated your own queer sexual awakening.

Mitchell’s career has also included directing Nicole Kidman in 2010’s “Rabbit Hole” and co-writing, co-producing and directing the 2017 sci-fi punk rom-com “How to Talk to Girls at Parties”. His TV credits include “The Good Fight”, HBO’s “Girls” and Hulu’s “Shrill”.

But “Anthem: Homunculus” is another animal altogether. Mitchell styled the project as a radio play, engaging the imagination while relying only on voice and music to tell his emotional story. Available via the Luminary podcast app, the darkly humorous 10-part series presents a richly poignant, autobiographical narrative that touches on themes of loss and religion as it imagines Mitchell’s life if he’d never left his small-town of Junction City, Kansas. His broke, uninsured and struggling artist alter ego, Ceann Mackay (voiced by Mitchell), suffers from a brain tumor, the result, he says, of growing up plagued by Catholic guilt. To help pay for his surgery, he launches an app-based “tumor telethon” to crowdfund his survival. In confronting his own mortality, he reflects profoundly on his past, including his brother’s death (Mitchell was 14 when his 4-year-old brother died from a heart condition) and a cast of Broadway icons – including Patti LuPone as his Aunt Ida, and Glenn Close as his mother – inhabit versions of friends and family members from Mitchell’s life. For his “Origin of Love Tour”, he’s been performing songs from the podcast as well as sharing the backstory of how Hedwig became Hedwig. I caught up with Mitchell while he was on a train en route to Boston.

You go deep into some of your own heavy life experiences during “Anthem: Homunculus”. How emotional was the process of creating it?

When you do something like this you don’t get an opening night, you don’t get an audience, so you don’t get the whole arrival that an opening night of a play or a movie or even a concert has with an audience, which kind of seals it in a way. So it still feels unfelt. Making it was very intense and emotional, but it was spread out over a year-and-a-half. But we just scheduled a marathon listening session in a movie theater, so we’re going to have food and breaks and live music and listening to the whole thing with 200 people. We’re going to do a special cinema mix for it so that’ll be, I think, our beginning of letting go, which is good because that’s what an opening should be: graduation for your child.

So far, how has “Anthem” resonated with listeners? What are you hearing?

The thing is, it’s not as many people as we’d hoped and we knew the risk of a paywall was a part of it. Some people are just subscription fatigued, so a lot of people haven’t really listened to it. Those who do, generally when they’ve heard it, they’re very into it. There’s also not a thing like it you can compare it to. As with most of my work, it’s kind of different, so it’s hard to market, which means the initial run of the play, movie, podcast does not smash or knock it out of the park; it tends to be something that’s passed on … like a disease. (Laughs.) No – like an heirloom! So it becomes more special that way. But it does take time to do that, and it’s still in the filtering stage.

That really is just the John Cameron Mitchell way.

Yeah. It means less money and less of the usual definition of heat and buzz and all of that. But a little over a long period of time is always my way of working. It’s “love me little, love me long.”

It must be encouraging, at least, knowing that a project can have its moment much later, which was the case for “Hedwig and the Angry Inch”.

This is pushing the envelope and people have to catch up with it. Same thing happened with “Shortbus” and “Hedwig”, and even, I suspect, my last film “How to Talk to Girls at Parties” will be something that will come around later.

Why did you want to tell your story at this point in your life?

It’s just when people do.

You’re 56. Is that the age people tell the story of their life?

It can be. It’s usually the time when your parents go and that can embolden some people. Kids are out of the house, if you have kids. And it’s kind of a mid-career thing to do. I like the idea of auto-fiction, where you’re still making things up and telling stories that are true but rearranging them. So autobiographical fiction is my favorite kind of fiction.

Well, you did tell me the last time we spoke that reality bores you.

Yeah. I mean, I’m not completely bored with realism, and I love artists that work in supernaturalistic ways, but my take just tends to be more fairytale and a little bit of comic book.

Tell me about this incredibly dramatic, geometric dress you’ve been wearing during the “Origin of Love Tour”. I think it’s called the “transformer.”

(Laughs.) It’s not called anything.

That’s the name that’s floating around. So you didn’t name it, but somebody did.

The “transformer” dress, I’ll take it. It’s Erik Bergrin, someone I have known for a very long time and always admired. But there’s a lot of talented people, and when I was first thinking about the tour I knew I couldn’t bring much of the sets, so I knew the costumes should be a kind of set and I wanted it to break into multiple costumes. I first spoke to Thom Brown, the fashion designer, about it and he was really into it, but designers can rarely do plays. Fashion designers don’t have time for other projects unless it’s a video or something already existing.

A lot of my collaborators are people who are brilliant but coming up, that people don’t know. I get great pleasure introducing people’s work to the world, and plus they work their ass off when they’re hungry and have something to prove. And Erik is such a genius that I expect to work with him on a stage version of “Anthem” and other projects, and he did exactly what I wanted: a six-costume “transformer” dress (laughs) inspired by the cubists, and he exceeded my dreams. We’ve got a light-up removable heart. The costume has been around the world and is very sturdy and industrial and lights up and so I’m thrilled with that.

Also, as we go along it’s kind of like (the fable) “Stone Soup”: we add elements. In Korea, they added a live projection design with an overhead projector and someone manipulating color forms with their hands live. We adopted that. I think we’re gonna do it in Ann Arbor too. And then we often sing a song from that town or in the language of the country we’re in, so I sing Korean songs or Spanish songs in Mexico, and in Boston we sang “More Than a Feeling.”

At this point, I imagine “The Origin of Love,” the song from “Hedwig”, carries a lot of weight because there are so many personal stories wrapped up in it from you hearing fan stories over the years. Where do you go in your head now when you’re singing that song? Does it take on new life depending on where you perform it?

It does. As an actor I often just see the images I’m singing about and that comes out in different ways. It shouldn’t be too rigid. Doing it for various shows, we do “The Origin of Love” and then we do “The End of Love.”

What else are you working on right now? I heard there’s something happening with you and Hulu.

I am developing a television show with them that I can’t really talk about right now because they have to decide this month whether it’s going to go forward. They go through all the projects and decide, but I’m very excited about it. I’m still determined to get “Anthem” on stage.

I do love “Anthem” in the audio format. I love that my imagination gets to take me places.

Yes, that’s what a book does too. And people aren’t used to it so much in the audio form – there are some fictional things, but they seem to be a little more stylized. It’s great to work in that form. I’d like to see what the Broadway version would be like. And I also did a little benefit 12-inch LP of Lou Reed songs that will be coming out for the holiday called “Turning Time Around”, produced by Peter Buck of R.E.M.

Jumping back to “Origin of Love”: I’m so moved by the fact that the tour really came out of needing to financially assist your mother, who is living with Alzheimer’s. How is she doing and has this tour accomplished what you set out to accomplish when it comes to helping her?

Well, it helped. And it continues to help. The amount of money is so large, and “Shrill” is my real big money job. “The Origin of Love” brings in some, but I didn’t want to do it alone to track, so I get to bring a lot of people around and that makes it less lucrative but more fun. It’s turned out to be something I’m really proud of and that will continue for years, off and on, because it’s just an easy show to do without doing a whole musical, which I’m kind of tired of.

You’re tired of the “Hedwig” musical?

Yeah. So this can still touch on the themes and touch on other themes that deal with today: growing up and my boyfriend and the motivation for a lot of things, and it’s just a lot more fun. On “Broadway” they didn’t let me crowd surf for insurance purposes, so this is a corrective.

Right, you crowd-surfed at the Sydney Opera House in Australia.

I do it every night.

What does it feel like to be carried by humans you don’t know? That’s a lot of trust you’re putting into complete strangers.

Yeah, but they trust me. It’s a direct metaphor for the work and the person receiving it, and it’s being held up in a very gentle way. Sometimes it’s the story, or I am too heavy, and someone else steps in to help. I believe in audiences and being in the same space.