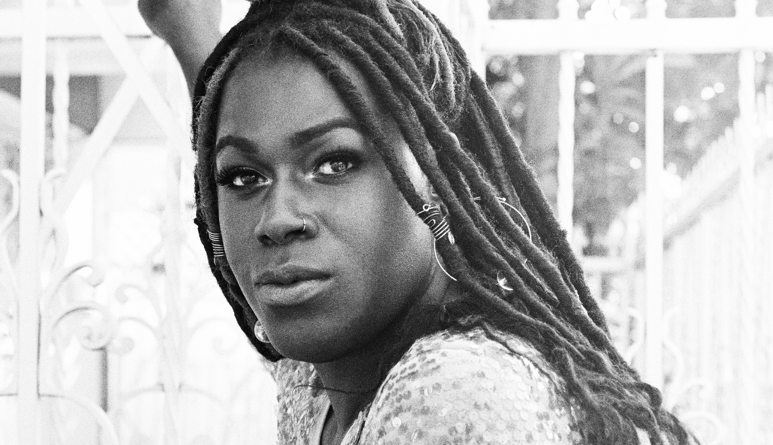 ‘The world wasn’t ready for Einstein and his theories either’

Even in prison, Shea Diamond was a star. The concrete floor her stage, the men her audience. And the acoustics? “The best,” Diamond says.

The 40-year-old soul songstress stretched her body over the hard ground, beating it while singing a song she wrote in her cell called “I Am Her.” She was serving a 10-year jail sentence at various men’s correctional facilities in Michigan for committing armed robbery, a desperate attempt to fund her transition, and “instead of just counting the days and wondering what day it is, I put all the energy into music.” The men were transfixed, moved. “These guys were singing it,” she says, “and asking me to sing it again.”

Diamond was released from prison in 2009 with a passel of songs she’d written, moved to New York City, and devoted her new life beyond bars to being on the front lines of transgender activism. In early 2016, out big-name producer Justin Tranter, whom she calls her “fairy godmother,” was blown away by an a cappella performance she gave at a Trans Lives Matter event. Now, Diamond’s empowered jail musings are free at last on her Tranter-produced debut EP, “Seen It All”, and a forthcoming full-length.

Do you think the world is ready for a major trans artist?

How does it feel to know that you are a part of the change?

What role has music played in helping you overcome your hardships?

Music was able to heal me in every moment, including my confinement. That’s when it was the roughest for me, because I didn’t have any support. So the family and friends that didn’t turn their back on me because of my gender identity, they turned their backs on me because I was a criminal in their eyes. I had to really reflect and deal with myself. I was left to myself and there was nobody else. I had to reflect and be able to internalize a lot, and so I projected a lot of that energy, both negative and positive, into music and created what at the time seemed to be like poems or just words that started with a story.

With “I Am Her,” I said, “I want to be able to express all my feelings about the church, the rejection from the church, how nobody wanted to accept me for being her,” and it talks about how, at the end of the day, I was by myself and I was all right by myself. Being trans, they wanted to punish me extra, they wanted to discard me of yard or telephone privileges for just being me.

What did your activism entail?

It entailed a lot at different times. Because there were different roles I played within activism, like survival sex worker activism – a lot of work around that. Because a lot of people wouldn’t care if (trans sex workers) got murdered because nobody would question, and so that was affecting a large part of our community. Our most marginalized part of the community is the part of our community that is deprived of job opportunities, of other resources, and have to engage in survival sex work, because sometimes it’s our only option. Survival looks different for different people, and through my journey I’ve learned that.

We were trying to gather clothing for someone who was trapped in another state, so we would have to raise money in order to get a ticket for them to get back to a safe place because they were deprived food and their clothes were taken. So these things were established within a place that was supposed to do it, but it was us doing it. That’s what our activism looked like a lot of the times, doing a lot of things that people don’t wanna do. Our activism was protesting, was going to rallies, was going to march, was going to Washington, was going to all of these places trying to change policies. Our activism just looked completely different throughout the years.

Do you consider your music activism?

I do. In my music I believe that I touch things that people don’t really touch. I talk about what’s happening in our climate, and I believe that the great artists that weren’t so popular were the artists that were talking about what was happening in their times and speaking against those things. So everything from “I Am Her,” which became an anthem, to “Keisha Complexion,” that is reclaiming beauty for the dark-complected woman or person. It’s dealing with sexism, it’s dealing with activism, it’s dealing with self-care. There’s a part of my song that talks about, yes, we’re fighting all these things in life, there will always be oppression, but we have to have one day to just do us. Every element of my music is speaking to your spirit.

Recently, the people (told me they) wanna dance, so I said, “OK, “OK”. I’m gonna give you good music but something you’ll be able to dance to too.” So I’m making music now. One song is still in the activism world, but you’re still dancing on it. But the latest one I just worked on has nothing to do with activism. It’s just about you literally dancing.

Are you still working with Justin on those songs?

I am working with Justin. I am able to work with other writers and producers as well, so we’ve got a mixture of some really good stuff. We’ve been in the kitchen cookin’, and the result is gonna be really delicious.

How does working with another queer person, like Justin, affect the collaborative process?

What was going through your mind when Justin first contacted you after hearing “I Am Her”?

I completely thought it was a joke. I’ve been having people offer to sign me and to buy my song “I Am Her” since I was incarcerated.

And why did you say no?

Because for me there were other songs that were on the shopping block! (Laughs) But some songs really were near and dear to me. “I Am Her” was one of them, and the album ones; I wanted to hold onto those. So getting this email from Justin talking about, “Yeah, I wanna fly you on out to LA,” I was like, “Yeah, “suuuure”.” (Laughs) I just thought this is one more person that is gonna take me along for the ride. I definitely didn’t take it serious. I told him, “Look, I can’t afford to go out to California and to the studio,” and he said, “No, I’m gonna pay for your hotel. I’m gonna pay for your flight, I’m gonna pay for your food.” So, because we’re in the age of Google, I go on Google and turns out he’s a person.

Our first meeting was at a Cyndi Lauper performance. That was the first meeting and I was already impressed. Then he flew me and my friend out to California. We were just like queens there. And then going into the studio for the first time – you know, a real studio – to me it was just like magic. Just being able to record “Seen It All” and just the magic of being in that space and in that moment knowing where I came from and knowing where I was in that moment and what I had accomplished despite all those odds. And that song was just perfect, of how I thought I’d seen it all, and I really hadn’t.