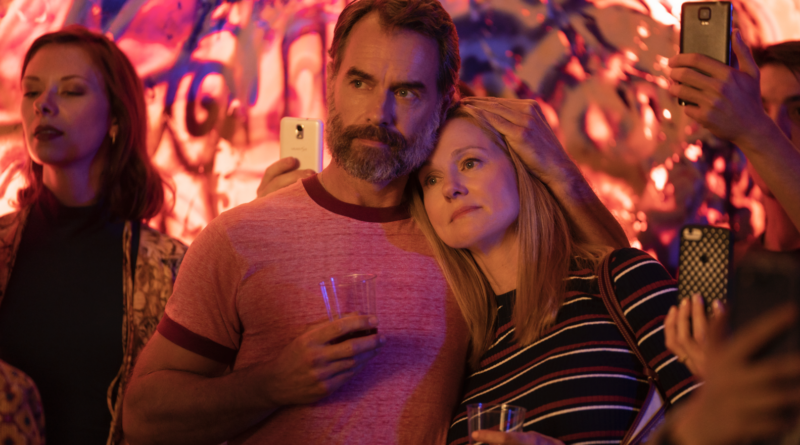 ‘Tales of the City’ vet talks returning to Barbary Lane, being a ‘mini’ gay icon and moving beyond the straight, white girl

Driving into San Francisco, Laura Linney’s Mary Ann Singleton is flush with nostalgia, her lips gently bending into a soft, soothed smile. Home is here and she is home.

It is present-day when Mary Ann arrives at 28 Barbary Lane like she did the first time, in 1976; she is still fresh-faced and naive. And lost again, in need of a reset. In tow: flashes of warm memories as brilliant and vivid as the strung-up lights aglow in the courtyard within Anna Madrigal’s fantasyland domain. When openly gay author Armistead Maupin’s beloved “Tales of the City” novels were originally adapted into a series that aired on PBS in 1994, these mystic grounds opened their doors to a community of LGBTQ pariahs who hadn’t found their people yet – or themselves. For them, 28 Barbary Lane was home too.

When Mary Ann returns, Mrs. Madrigal (Olympia Dukakis) is still holding court at the same address, where she, a free-spirited trans woman, continues to guide all walks of LGBTQ life with the same warmth and wisdom of a mama bear protecting her cubs. Linney, who reprises her role and also executive produced the show alongside Maupin, hopes the Netflix revival – the fourth TV adaptation of the book series – will act as it did when she first starred in the miniseries over two decades ago: as a safe haven for self-expression and free-love, no matter the queer-averse outside world. The 55-year-old Emmy winner, traverser of TV (“Ozark”, “The Big C”), film (“The Truman Show”, “Love Actually”, “The Laramie Project”) and theater (“The Little Foxes”), says, “We really hope this series will reach people who are lonely and disoriented.”

When did you first become aware that, with “Tales”, you were part of something that was so deeply affecting to members of the LGBTQ community?

Well, I’m glad I didn’t know when the project first came to me. I’m really glad I didn’t understand how broad the reach and how deep the reach was of Armistead’s work. I’m sure it would’ve completely intimidated me – and I’m sure I wouldn’t have handled it terribly well – so I’m glad that I was somewhat ignorant when I first started to make the series. But it became very clear to me shortly after we finished just how loved these stories are, and the more I got to understand and know Armistead, the more I understood that phenomenon. He’s truly a great man.

How did you know that the show had this weight?

I just noticed that everyone was very happy to see me all of a sudden! (Laughs) Honestly, I would walk down the street and people would just be very happy and it was really wonderful. It’s been a real joy.

“Tales of the City” has made you a bit of a gay icon, hasn’t it?

A quarter Cher, maybe. Not even. A fifth Cher. Cher is a big deal! But it’s something I’m so proud of, and it’s really just a tremendous gift.

Knowing that your “Tales” role has contributed to helping a community feel loved and accepted, I wonder about the difference in doing a project like this versus, say, “The Truman Show”.

You certainly hope that that’s the impact of anything you do, that if you get to the truth of something it will impact someone on a deep level. But with this, it was also for and about a community which already meant so much to me. And the fact that I could, at the time, help advocate for my friends and for the people who I loved “and” love was a wonderful thing to be able to do. Fortunately now, it’s not necessary to have the straight, white girl anymore.

But at the time, Mary Ann and her relationship to the LGBTQ community was really groundbreaking.

It kind of took an “Alice in Wonderland” person to hold the hand of the audience and bring them into a world that they had maybe not encountered before, and fortunately that’s not the case now.

Did it feel daring to you at the time?

Not to me. (Laughs) I think it was daring to other people, but not to me. To me it just felt like family and home.

It sounds like you had exposure to the community at a very young age, even before “Tales”.

People as in friends?

There’s a story that during the original “Tales” you washed and massaged director Alastair Reid’s feet out of his concern for his bunions. And you’re laughing right now as if it were true.

(Laughs) I didn’t “quite” wash them – it makes it sounds like he’s Christ and I was one of his disciples (laughs). But he was a wonderful, wonderful man and he was having real problems with his feet and, yeah, he needed some help and I was happy to give it.

That brings me to my next question, which is not feet-related but could be: What’s your best behind-the-scenes story from the revival?

The revival: You know, it’s just people. It’s about being able to do this work with people who I have such a long connection with. It’s being able to giggle with Armistead looking at the monitor and watching it come back to life again. It’s about being with Olympia, who is 88 years old and remarkable. And then it’s about Paul Gross (portraying Brian Hawkins, Mary Ann’s ex) and Barbara Garrick (WASPy socialite DeDe Halcyon Day), and it’s also about this wonderful younger generation of people for whom the series is really for now. You know, there’s this sense of passing the baton onto a younger, and in some ways very much more evolved, group of LGBTQ people and a community that has expanded in a way that did not exist when we did the first series.

And in such a way you probably couldn’t even perceive at that time.

Oh god, no, absolutely not. The whole perception of being trans is completely different, and non-binary didn’t even exist – of course it existed, but it wasn’t in anyone’s awareness; there was no language for it and there was no identity for it. It had not been named yet. People who were not within that intimate community were not aware of it, even those of us who were LGBTQ-friendly, so there’s a lot that has changed.

What has it been like for you to be part of a show that has existed at various points in LGBTQ history?

It’s a remarkable, amazing experience. And it intersects with my own life at different periods of time as well. I mean, with Mary Ann, very rarely does anyone get to do something that spans over 25 years of their life. And it’s amazing to see how our culture has changed, how our identity has changed, how our relationships and understanding of each other has changed, in some ways for the better and maybe in some ways for the worse. And it’s also amazing to see a generational shift. What it was to be LGBTQ in 1990 is very different than 2019, and what it means to be either gay or trans or non-binary or queer. It’s amazing to see things evolve.

Beyond informing mainstream audiences, I think LGBTQ people of various generations and experiences can learn a lot about each other by watching this show.

I hope so. That’s really what we wanted. The entire writers’ room was LGBTQ, our directors are all LGBTQ, and there is a sense of, “What can the generations learn from each other?”

When you drive up to 28 Barbary Lane again during the revival’s premiere episode, you enter it almost like Dorothy enters Oz. During that shoot what were you feeling?

Where does your mind go to find all the emotions that are unspoken but written so vividly on your face?

Well, it’s not hard. When there’s good writing and a good circumstance to throw yourself into, it comes pretty easily. And my connection to “Tales” is deep and intimate and important, particularly to 28 Barbary Lane. All that it represents is important to me.

How about your connection to Melissa Etheridge’s “Come to My Window”?

Isn’t that the point of that karaoke scene?

Yeah, boy, but did we really have to prove it to that extent? I don’t know (laughs). I love that song – I think it’s a gorgeous song – and I love Melissa Etheridge and, god, I hope she forgives me. I hope “everyone” forgives me for that because it was just agony. Awful, awful.

Your daughter in the series, Shawna, is played by openly lesbian actress Ellen Page. And many of the other characters are played by LGBTQ actors. When “Tales” originally aired, casting openly LGBTQ actors was not a reality.

What has that change meant to you and to the series?

Well, it’s fantastic! It’s long overdue. And it’s been a painful process for people, you know, so our team of producers are very, very proud of the fact that we were able to cast all LGBTQ writers, all LGBTQ directors and, not all, but most of our actors intersect with their own identity. Yeah, so it’s just good.

I searched high and low and I couldn’t find any evidence but perhaps in theater: Have you ever had a proper LGBTQ role yourself?

Considering the dialogue about straight actors playing LGBTQ roles, is that something you wouldn’t even be interested in touching at this point in your career?

You know, it depends. It depends. I mean, I doubt it. I doubt that I would. But I come at it from two different viewpoints: There’s the political standpoint of how important it is for sexual orientation and available acting parts to align correctly, and then there’s the other viewpoint, which is that actors should have the experience to do everything. And we’re not there yet. But I believe it should cross both ways, and I believe LGBTQ people should play cisgender roles and should play straight people, and I believe it should go back and forth.

Because, otherwise, we may be limiting LGBTQ actors if there’s not a back-and-forth?

Absolutely. And there’s just a lot to learn. So I go back and forth about it, but I think right now, the more what I consider appropriate casting for this community that happens, the better.

This is a limited series, but is there a possibility that “Tales” could take us back to 28 Barbary Lane in the future? And would you return?

Yeah, sure. We’ll see. One hopes, but we’ll see what happens. It certainly seems to have a life of its own, so that bodes well.

“Home is a feeling” is the series’ tagline. To end, what does home mean to you, and in which of the most unexpected places have you found it?

What a wonderful question. For me, home is always the people in the home (laughs), so it’s about the people, the like-minded people, that you’re surrounded by, the people who just intrinsically understand and love you and challenge you and frustrate you – all of that. The people who you’re able to feel a sense of intimacy with and bond with. And then the most unexpected place I’ve felt home: I think on a film set, quite frankly. It was never what I expected to do, and actually the first “Tales” was the very first job where I thought, “Oh, maybe I could actually work in front of a camera. Maybe it might be OK.”

As editor of Q Syndicate, the international LGBTQ wire service, Chris Azzopardi has interviewed a multitude of superstars, including Cher, Meryl Streep, Mariah Carey and Beyoncé. His work has also appeared in GQ, Vanity Fair and Billboard. Reach him via Twitter @chrisazzopardi.