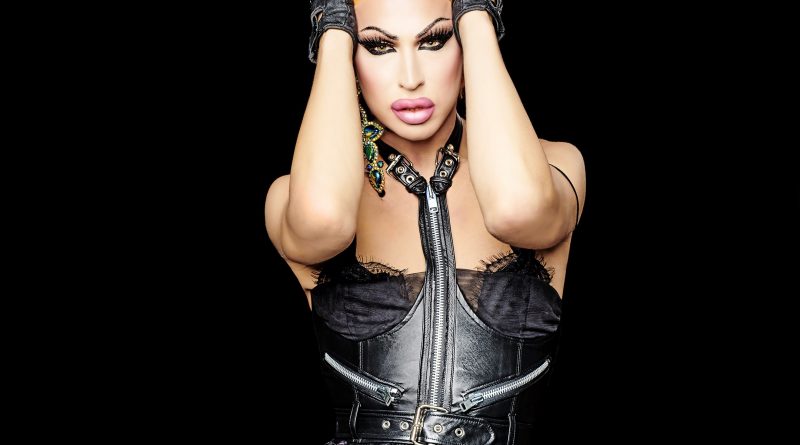 We’re super excited for Hytes to finally come to the Bay Area. As Hytes has been displaying on the current season of Drag Race, she isn’t your typical, run-of-the-mill queen. Hytes is a professionally trained ballet dancer and a heavily awarded pageant winner. Before becoming the famous queen we love today, she toured the world for 4 years with “Les Ballet Trockadero de Monte Carlo.” After transitioning from ballet dancer to drag queen, she went on to win Miss Continental 2014. Now she’s vying for the Drag Race crown and about to star in Peaches Christ’s newest stage show.

Along with Drag Race alumni Raja and Ginger Minj, Hytes will be starring in The First Wives Fight Club, a live musical parody mash-up of the beloved 90s movies The First Wives Club and Fight Club. This show marks Peaches Christ Productions first ever theatrical movie mash-up. The show, co-written by Christ and drag legend Varla Jean Merman, will debut in San Francisco on April 7 and tour the West Coast throughout the month.

We caught up with the Canadian queen to talk about ballet, the Britney Spears televangelist Drag Race challenge, and, of course, The First Wives Fight Club.

Cammack: You’re about to star in the new Peaches Christ show that’s premiering in San Francisco. Have you ever been to SF and what are your thoughts on the city?

Hytes: I have never been to San Francisco. I’m so excited to go. Obviously there’s so much gay history there, and just history in general, that I’m really excited to finally be able to check it out.

We’re really excited to have you. How’d you first get connected with First Wives Fight Club and with Peaches?

Well, I’ve known about Peaches for a while. She actually contacted me. She was coming up with the show and she was actually on a gay cruise. Some friends of mine from Toronto were on the cruise with her and she kinda asked them about me and they recommended me for the part, so she called me up. It was kind of random cause she doesn’t usually use current girls from the season of Drag Race on her shows, so this is kinda like a first for her. So I’m really honored to be a part of it and I can’t wait to do it.

For the show, they’re combining the two movies First Wives Club and Fight Club. If you could only pick one movie to watch, which would you pick?

As often as I can. It really is just depending on the space that I’m given. If I’m in a tiny little bar then I can’t really do much ballet, because I can’t actually physically move. And sometimes it’s not safe, like the stage I’m performing on isn’t stable enough for me to be doing ballet. So, it just kind of depends on the venue I’m in. But any chance I get, I definitely try to incorporate my ballet into my shows.

What made you want to transition from ballet into drag?

I was just really burnt out doing classical ballet. I’d done it for my entire adult life and I was just tired of it. And I also really wanted to be my own boss and call the shots in my life. Plus I like dressing up like a woman. (Laughs) It combined all my passions together.

With Drag Race, during your entrance you had a moment where you recognized Nina West and you guys had a connection. What was it like seeing a familiar face in Werk Room?

It was so nice. It was just so nice seeing her. And she was the first person I saw. It was this giant yellow woman with this huge smile on her face, just looking at me. It was wonderful. It was definitely comforting. Our nicknames for each other are each other’s emotional support animals, because we were all constantly just hugging each other and holding on to each other for dear life. It was amazing having a real sister there during the full experience.

You just got to be on a team with her for the Evangelical Britney Spears challenge. You guys worked really close together. What was it like working with her and that whole team? You all did a really good job.

Nina is a fantastic leader and she has a real theater background. She puts on her own show in Columbus, Ohio. She does like three a year. She really knows how to put things together. I have more of a dance background, so actual spoken theater is not really my forte. So, it was really nice having her as a leader and kind of getting tips and directions from her. It was great. She can lead me any day.

If you had to come up with your own ‘diva church’ just for yourself, who would you pick as your ultimate diva?

It’s shocking that no one brought up Cher or Beyoncé for the entire episode.

I know. I mean, if you look at the teams, especially our team, a lot of the kids are a little bit younger. I think me, Nina, and Shuga are kind of the older queens in the group and Cher isn’t really a young person’s game. But I think if I had to have my way and it had been my decision, Cher would have definitely been at the top of the list.