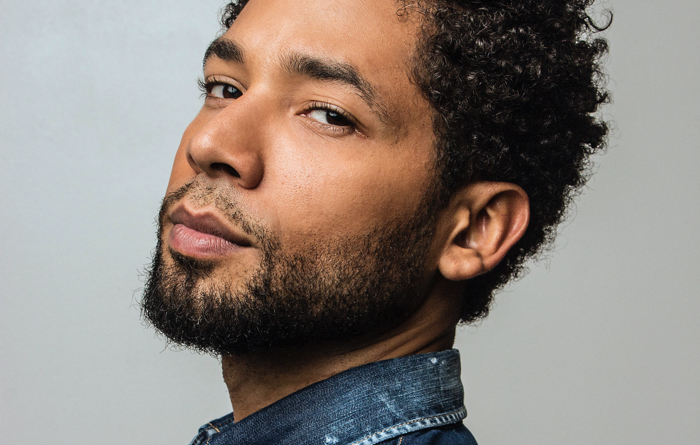 Actor-activist on defying Hollywood limitations, using his voice for good, and Pride past and present

Really, aside from a fame-catapulting role on “Empire” and a dreamy croon so velvety you could rest your head on it at night, Jussie Smollett is just like you. Or was: He remembers going to Pride. All the rainbows and free love and free condoms and fiery ex-boyfriend drama.

These days, he has shown up (to Long Beach Pride and Milwaukee Pride) as Singer Smollett, with swoon-worthy songs from his recently released debut – a contemporary R&B collection called “Sum of My Music” that’s as thoughtful as it is hooky – after putting it on the shelf for years because he was too busy diversifying TV. As out musician Jamal Lyon on the Fox drama “Empire”, Smollett, who got his start acting with 1992’s “The Mighty Ducks”, has crashed TV’s straight cis white party by bringing a positive depiction of a gay black man to your living room since the series premiered in 2015. Additionally, the 35-year-old multifaceted talent was featured as a celebrity correspondent during a May episode of the EPIX docu-series “America Divided”, exploring the horrific history of American racism.

Activist, singer, game-changing actor. A no-fucks businessman. Mariah Carey’s music-publishing student. And … a cookbook scribe? As Smollett’s groundbreakingly boundless career proves, when you’ve faced Pride drama, no one — not ex-boyfriends, not Sony execs — can stand in your way.

How have your life experiences shaped this album?

“Sum of My Music” is the totality, pretty much, of what I’ve been dealing with over the last couple of years. The things with love, the things with my own personal insecurities, and the insecurities others put on you. And I write about my jealousy! (Laughs)

You gotta work it out.

I gotta work it out. I talk about a lot of personal things, and I’ve been singing (“Empire”) soundtracks for a couple of years now, and I’m so connected to the songs that I sing. I’ve written, like, half of the songs that I sing on the show, but it’s nice to be able to hide behind my own stories and my own lyrics that are just for me.

You’ve been in showbiz since you were a kid. As a gay black man, what challenges have you faced in Hollywood?

Umm (long pause). You know, I’d like to… let me think about it. I’ve been so focused on creating my own projects, honest to god. That’s really the message that I’m trying to get out there as much as possible: to create your own pieces, your own projects. Granted, I’m a businessman, but I kind of don’t pay attention to anything except trying to create with my people for my people and saying “fuck anything else.” I’m not interested anymore in convincing anybody that I’m valid enough or my stories are valid enough to tell.

But, of course there are challenges to being openly black (laughs) “and” openly gay. At the same time, what else am I supposed to do? This is who I am. Am I supposed to, in 2018, not live my life now for a role? I have to just keep it moving, and I have to create with people. This is why I’m an executive producer on “Giants”, which is on (“Insecure” producer and actress) Issa Rae’s YouTube channel. It deals with everything from mental illness to homosexuality, and everything in between.

Mariah Carey, who you duetted with on “Empire” and opened for on tour, famously pushed for her own creative control in the ’90s. And you initially had planned on releasing this album on Columbia Records, until your artistic vision didn’t align with theirs and you released the album on your own indie label, Music Of Sound. What did you learn from Mariah about creative freedom?

I remember being on the phone with her for three hours and her just breaking down publishing for me. When I asked to be let out of my contract and be pulled away from my contact with Columbia, I feel like I was armed with knowledge from these types of people like her, and just different artists that I’ve met or veterans in the business that really kind of held my hand without even knowing it. Like, “they” thought they were just telling me something smart, but little did they know – or maybe they did know – they were really arming me with what I needed. That’s why you should always be unselfish with your knowledge, ’cause you never know if it’s gonna help somebody in the future.

From what I’ve heard you cry when you perform “Freedom,” off the new album.

What is it about that song that gets you emotional?

There’s one particular part where I’m like, (sings) “and I don’t care what they say, ’cause I know who we are to each other.” I cry every single time. And maybe it’s because I have to push really hard for that note (laughs)! Or, maybe it’s just that it reminds me of how precious love is. And it reminds me of that idea of, I just – I want to love. And I think to me that’s why I put Tika (Sumpter) and Cynthia (Erivo) in the video I directed for (the song) and they played lovers, they played partners. And it was just a thing of, I just wanted to show a same-sex couple doing the things everybody does. To me, freedom is just the ability to love and the ability to not just accept. I hate that word “accept.” It’s not even about that. It’s about changing our molecular structure so we recognize love … and “love”. If it’s two consenting adults, if it’s two consenting teenagers, if it’s two consenting children, let these people love. Let these people love each other. How can love possibly be bad?

As someone who’s been representing a sorely underrepresented group of people on “Empire” – the gay black male community – what has that meant to you?

It really humbles me. And it makes me grateful. I just remember that there was nobody I could see on TV who I could identify with. The very first person that I ever saw who was gay at all, like any member of the LGBTQ community that I could somewhat identify with, was Wilson Cruz (as Rickie Vasquez) on “My So-Called Life”. He was someone of color, and I grew up loving people like Elton John, but I couldn’t identify with Elton John because that’s all I saw. I didn’t put two and two together – it wasn’t representation. I loved George Michael growing up. I loved Boy George growing up. But I didn’t connect. And maybe I would’ve been able to connect more on that level had I seen more people who represented me on that level. So nothing against them. They’re wonderful.

Exactly. I hope we can all get to that point. But representation is so important and the responsibility – something hit me yesterday. I was talking to someone, and I said, “I think a lot of things are debatable about me or certain people who I know who are leaders or whatever, but I think that I’m a good person.” And I don’t know if good people are supposed to say they’re a good person, but I am saying I’m a good person. I take responsibility for all that I am.

But I’ve been given a platform, and I’ve worked for that platform. I’ve been doing this since I was 4. Got my SAG card in 1987. My point is we could use that platform for good, but we could also use that platform for bad, and that shit is scary. You have people looking up to you, you have people who somehow feel affected by what you do. There is a certain level of responsibility that you must take. There is no debate, I don’t give a fuck. If the people are listening to you, you should say something worth hearing.

Can you tell me about your first Pride event?

Oh god. I had the best time, and then got in a major fight with my boyfriend at the time. See, this is the thing: If your shit is strong, Pride can be a real good time. If your shit is weak, Pride will tear a motherfucker apart!

Oh yeah, it can be drama depending on who you see.

It can be major drama, especially if it’s the city in which you live.

Because you’re gonna run into ex-boyfriends.

You have a cookbook coming out, a collaboration with your siblings; that’s how settled down you are.

I have a fucking cookbook with my family – I’m “very” settled down. I’m in a calm, wonderful relationship. My life is just calmer, it’s more secure. So now, when I go to pride, it’s all love, it’s fun. I haven’t really been able to go to a Pride in a couple of years and Long Beach Pride was the first Pride that I’ve ever performed at because ever since “Empire” started I always said, “No, I don’t want to do Pride until I do it for my album. I want it to be special. I want to do it when I’m on tour,” and that’s what we ended up doing. And it’s been fun.

Because I need a husband: What do you cook for your man and are those recipes in the book?

Listen, everybody needs to know how to cook. You got to get your man right.

What is your Pride message for the LGBTQ community?

To love yourself. Love yourself and love each other. We are literally all we got, and I say this in every single show. I turn the lights up on the audience and I just say, “Society wants us to believe that the world doesn’t really look like this, but it does. This is what the world looks like, all different races and cultures and religions and sexualities and genders and ages and body types and people standing, people sitting, people in a wheelchair, people in crutches. All of that. So my thing is, the people who are yelling hateful things are so fucking loud, and we just need to lower their volume so we can raise up ours for us who want to preach love and who want to practice love.” It’s that simple.

Listen, I know it’s deeper than just that. We have to deal with policy changes, we gotta deal with law changes. We gotta deal with all of that. It’s economic. It’s all of these things. But everything starts with love. And I hate the term “minority,” but if every single so-called minority group were to raise up and join together, we would be a fierce majority that no motherfucker could take down.