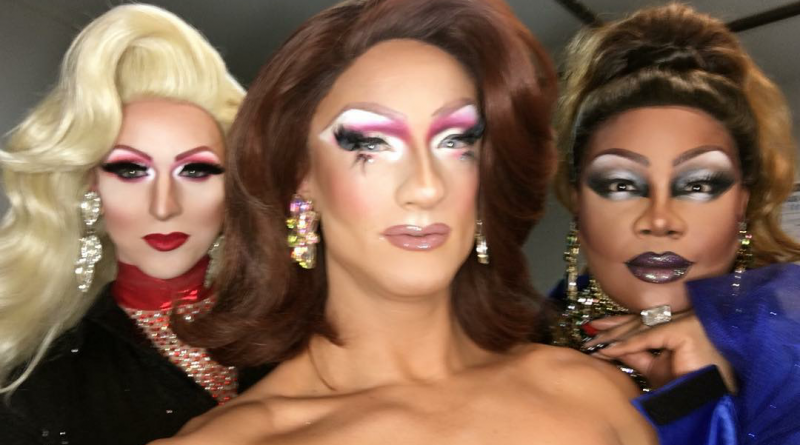 What’s new this year at Midnight Sun, the nation’s premiere video bar in the heart of the Castro? There’s been a few things refreshed, renewed and redone at Midnight Sun, including a delicious new drink menu. But, you get a whole lot of new with just the addition of one new drag show on  Midnight Sun’s roster of event with Munros at Midnight Sun. M@M, which it is so fondly called, is the latest drag show to set weekly roots at Midnight Sun on Mondays and brought to you by the drag legend who is Mercedez Munro and her very talented drag house La Maison de Munro. Drag houses, more prominent in gay communities in the Nation’s East and South regions, are definitely present in San Francisco, but few have created a stage house, so to speak, to put their talents on display while opening its stage doors to the community of queens at large. Mercedez shares hosting duties on alternating weeks with her drag daughters Paju Munro and Ruby Red Munro. Though M@M presents weekly guests, the talent of the Munro family  would seem enough for a show by itself. “With the help of my daughters Paju and Ruby, we attack it,” says the matriarch Mercedez.

M@M had a soft open at the end of January to an amazing reception, and gave its crowd a taste of the show’s format, which includes a RuView of the previous week’s RuPaul’s Drag Race episode, and a sneak peek into upcoming guests. The list of the show’s guest stars has been stellar to date. “You never know who will pop up,” shared Mercedez. “We’ve had (Drag Race alums) Shangela, BeBe
Zahara Benet, Morgan McMichaels, Milk, Kennedy Davenport and others
cross our doorway!” Munros at Midnight Sun does a great job of presenting internationally/nationally recognized queens with locally established queens, in addition, offering a spot in the line up to a drag queen upstart. It is quite a special show.

But according to Mother Mercedez, being a family production is not the only thing that makes M@M special. “What makes us special, if I can be honest, are the people who attend Munros at Midnight Sun. We all know
that Monday nights can be super tricky for people, especially after
they’ve just spent a weekend playing, and the energy that people
consistently bring to our show is nothing short of amazing. The bar staff also plays a huge role in this. If it weren’t for (them), we wouldn’t have been able to be as successful as we have been.”

Midnight Sun has always had a strong drag presence in its 47 years in San Francisco, so it’s not surprising that they have consistently kicked off their week with a drag spectacular. M@M makes total sense for the bar’s new programming. But, with the collective talents of La Maison de Munro, a drag show hosted and headlined by the likes of Mercedez, Paju and Ruby would have been welcomed anywhere. So why Midnight Sun for the Munros? Mercedez was quick to explain “I’ve been a huge fan of Joshua J. (General Manager of Midnight Sun) for a very long while. We’ve been trying to work together for years and have
just never really had the right timing, or project until Munros at Midnight Sun. I have a house full of AMAZINGLY talented people, so I wanted it to be about us,
for us, and the community. Midnight Sun is an amazing establishment that
has housed many drag shows, fundraisers and events so they are a
friend to the community.”

Mondays, Munros, Midnight Sun. What other “M” word would sum up
Munros at Midnight Sun for the audience?
“Magnificent!” Mercedez boldly expressed. “It’s a high energy show, filled with rhinestones
and comedy. At Munros at Midnight
Sun you can rub elbows with the stars, without paying a cover and have a great time!”

Munros at Midnight is every Monday at Midnight Sun 4067 – 18th Street in the Castro. 9pm. No Cover

Other Drag Shows/Events at Midnight Sun: