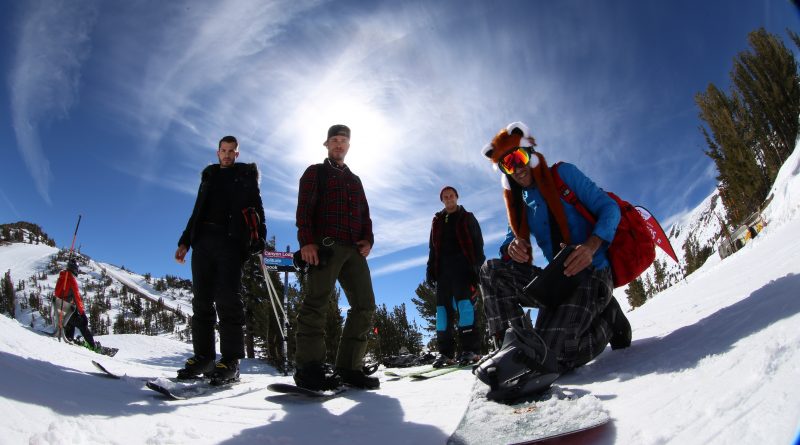 “What are we going to do this weekend?”

Admit it, you know you’ve had that conversation. You probably had it last Friday, Thursday if you’re a “planner.” I hate to break it to you, but the gays of SF have been having that same exchange for at least the last 16 years. Yes, we love parties. Yes, we love hot dudes and dirty beats. But no, we do not love the status quo.

That’s the sentiment that prompted Tom Whitman to look upward… 10,000 feet upward to be exact. 16 years ago, the White Knight of SoCal Nightlife hoped that his horde of homos would follow him to the hills.  And follow him they did.  From both Northern and Southern California.

In the decade-and-a-half since Whitman first schemed up his 4-day ski soirée, Elevation Gay Ski Week has become the gold standard of gay getaways. Its legendary status is due, in large part, to Whitman’s uncanny ability to be always dependable but never predictable.

Whether it’s Elevation Mammoth – the crown jewel of gay ski weeks – or Mammoth’s 8-year-old brother in Park City, you know exactly what you’re getting into with an Elevation event: superb slopes for shredding, damn-good DJs for dancing, and fun feisty dudes for… having a nice conversation by the fire 😉

Whitman’s magic lies in his ability to give people those expected extravaganzas that we look forward to every year (the Onesie Party, the Rock ‘N Bowl), mixed in with just the right number of new tricks pulled from his waterproof snowboarder sleeves.

“I’m super excited about the 16th anniversary of Elevation Mammoth,” says Whitman, “and not just because Sweet Sixteen is a good excuse to add some new elements and shake things up a bit.  It’s also amazing because so many people who attend have been coming 5, 10 and even all 15 years.  It’s become part of the gay culture, certainly in California.  And Elevation Utah has really come into its own.  Every year, more and more guys come from around the country and around the world. and an event can’t ask for anything better than that.”

When I asked Whitman about the exciting new events he has in store for Elevation Mammoth’s Sweet Sixteen year, he was a bit coy: “We have a few surprises coming up for the Sweet Sixteen , and I can’t tell you all of them.” Clearly, he understands the art of keeping a boy in suspense.

That right there is Elevation in a nutshell – it’s as much about the moguls as it is about the mashups. The music promises to be massive this year, with Whitman unleashing his familiar roster of heavy hitters on the mountain to spin us into a sweat: DJ Josh Peace, The Perry Twins, DJ Blacklow, DJ Dawna Montell, and DJ Casey Alva.

Over 2,500 guys from California and across the country will flock to Mammoth Lakes this March hoping to get a taste of that sweet, athletic action. (Yes, I’m still talking about snowboarding.)

Coming into its 8th year, the February Elevation event in Park City has really come into its own with over 1000 guys, multiple ski resorts, and 7300 acres of the most pristine slopes in the country in one resort alone. The Elevation brand has developed such a cult following among sassy ski bunnies and homo board bros that diehards have begun listing both stops as “can’t miss” on their winter to-do lists. You’ll recognize a couple of Whitman’s signature DJs (Josh Peace, Casey Alva) on the Park City playlist.

With just how easy it is to travel to Park City (it’s only a 30 minute drive from the Salt Lake airport), it’s no surprise that Elevation Utah is picking up major steam. The artsy downtown vibe of Park City combined with killer skiing and Utah boys with killer bods make this stop kryptonite for bromos and those who love them.

Which brings me to my final (just the) tip: As much fun as it is to shred the mountain before shredding the dance floor, you can have a helluva time at Elevation even if you aren’t a skier or a boarder. Take a lesson with all of the other SoCal boys who’ve never seen a snowflake. Can you imagine a better start to a gay romantic comedy than tumbling down the hill only to land in the arms of a mountain? Otherwise, browse the shops in Mammoth Village, take a soak in the hot tub, explore the snowshoeing trails, and meet up with all the sporty shorties at the 10k Apres wearing your snazziest green Christmas Sweater (it’s Saint Patrick’s Day)!