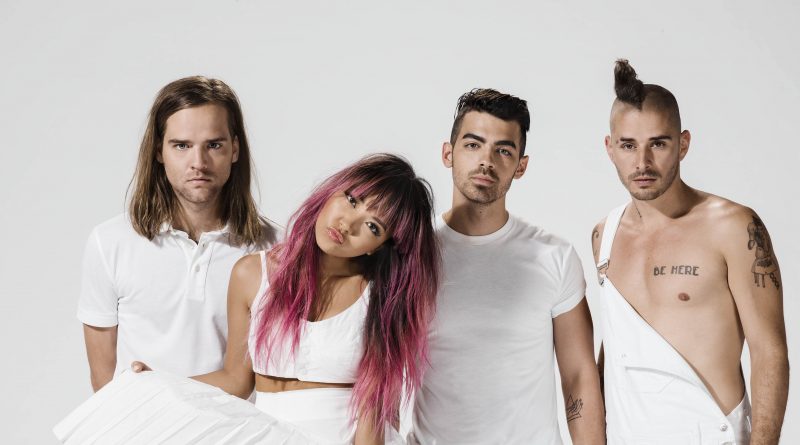 Why is Joe Jonas talking about whips and leather?

Apart from recalling his experience with both, the answer is simply because he can. Because the former baby-faced JoBro is all man now, from his 5 o’clock shadow to his steel physique, which he’s not been shy about showing off.

Like younger brother Nick, middle sibling Joe wasn’t done destroying any traces of his Disney halo when he freewheeled through our recent talk. Read on as he chats about his fondness for S&M, gay fans who send him pics of their privates and preferring an “older, mature” man play his hypothetical onscreen lover.

It’s been surprising to hear you talk so salaciously while promoting this album. But then again, I keep forgetting you’re not 17 anymore.

(Laughs) A lot of people do!

What about your current professional life differs from your career as a Jonas Brother?

The biggest difference is the writing. I’m proud of the stuff I did with my brothers, but you grow up and go through a lot of different things, so you may be talking about something very innocent – a first kiss, taking somebody out for the first time – when you’re that age. But cut to when you’re 27, and you’re going through things that are a bit more mature, sexually or what not, and that’s what you’re gonna write about.

A song from your new album, “Be Mean,” is essentially about S&M. Tell me about your decision to be so sexually liberated in your music.

Some people say, “We finally can talk about these kinds of things, and we want to go wild and crazy,” but really, it’s just stuff we’re going through. I feel like I’m free in my life to speak about it, and yeah, everyone should try a little bit of something new in the bedroom. It’s definitely fun when you bring some whips and leather and whatever you may be into – a little bit of S&M – into the bedroom. I wrote it about me and someone I was getting wild with, and maybe (we) busted some outfits out – you know, you get a little crazy. It’s a fun song, and I hope people can have fun with it and learn from it.

What do you want them to learn?

(Laughs) Well… I would love for them to learn that it’s good to try new things.

Maybe you should teach them, Joe.

I’ll do a handbook.

Have your brother, Nick, write the foreword.

Exactly. I expect you to be one of the reviewers.

Were there moments before when people were trying to guide you to be something different than who you felt you were?

I would say “yeah” to that. Yes, because it may have been subconscious; it could just be friends you’ve surrounded yourself with, or on a deeper level it could be music people around you saying, “This is the right direction for you, and this is where you should go next.”

I remember when I did a short run of a solo project (2011’s Fastlife, released on Disney Music Group’s Hollywood Records), all signs were pointing to a very R&B, smooth, sexy vibe for an album, and I listened without taking time for myself to really utilize influences that I love. I learned from it, but at the same time, it was jarring.

But I feel really comfortable in my life and career right now. I definitely feel like the best version of myself, and I’m glad I can have a good label now that allows me to spread my wings and create music that really is, for all of us (in the band), unique and special.

Another change: Your body. What inspired the muscles?

I wanted a change of pace and to put myself through a challenge. It’s easy to eat junk food and party every night on tour, so I put myself through a season where I challenged myself physically, and I really enjoyed it. There were days that were tough, but seeing your body slowly changing, you just want to keep on it. I had a trainer on tour with me – this amazing boxer Ava Knight – and she came out and busted my ass, and I was really enjoying it.

Has your beefier body gotten you more attention from gay men?

I think so! Probably, yeah. I’m seeing it just through DMs. It’s quite funny. But I take it as a compliment. It’s cool. At the end of the day, for me, it goes back to the music, and DNCE has done a lot of cool concerts, like Pride shows. We have a lot of gay fans, and we love that they’re so supportive, so hey, if that makes them happy, it’s all good.

What do gay men DM you?

I bet you could take a wild guess. (Laughs) It’s all over the map, from selfies to you-know-what. It’s funny, too, because you can’t really tell what people are sending because everything now is blurred out, and I like to read some of the DMs and hear stories. But, of course, sometimes there are crazy ones, and it’s just straight nudity. You have to just find something good in it – or laugh, depending on what it is.

I have to say, few things are making me feel optimistic about the current state of America, but your album is one of them.

Oh, man. Thanks! You know, honestly, that’s what we’re all about: taking people out of a place they don’t wanna be in and bringing some joy to a situation.

Why is it important for you and the band to perform at Pride events or, like you did recently, at a club like G-A-Y in London?

In the world we live in now more than ever, it’s especially important that, like you said, our music can take you out of that. I think, what is a better time than now for everyone coming together and being stronger together, whatever your thoughts are on the election? It can be a heartache for some. I think for DNCE we try to bring some joy to you and happiness and share the love, and that’s what it’s all about for us. If we can put a smile on your face, that’s what’s important to us. And look, our gay fans are awesome and we want to give back in every way we can, so we’re putting on shows for them.

How have you been processing the election outcome?

I’ve been able to see a lot of different viewpoints. What I mean is, I just presented at the Glamour Women of the Year event, and it was a pretty somber crowd, obviously. Toward the end, there was a bit of hope. Bono actually won Man of the Year, and he said it best when he was like, I shouldn’t even be up here, but now more than ever, men and women should be uniting and coming together. It was interesting to see how they’re handling it, but for me, personally, I was bummed. Now, it’s time to come together, and there’s going to be some positive things hopefully. It may suck, but I love this country and I think that’s what it’s about.

There are several videos online of paparazzi chasing you down and asking if you’re gay. Why do people think you’re gay?

I don’t know the real answer to it. I don’t have an issue with it. I think it’s a compliment. I have a lot of gay fans. It’s not like it bothers me. Some people handle it differently, but at the end of the day, I’m cool with it and think it’s kind of funny. You have to learn to laugh; people are gonna create a story out of anything.

You know, it’s probably because I’m in touch with my feminine side. Look, I love fashion; I love to dress well. I love certain things like that. And I have a lot of gay friends, as well, so that could probably point them in that direction. But again, the gay community is something that is close to my heart, so I don’t mind. Hey, if they wanna think I’m gay, it’s fun.

Reinforcing those rumors: the fact that you want to collaborate with Barbra Streisand.

Do you have a favorite Barbra album?

That’s tough to say. Look, I love theater as well. I had the opportunity to be on Broadway when I was younger, and I hope to be able to do it again one day. So, I would say the theatrical side of Barbra, I really love.

You’ve also dabbled in acting. If you ever followed in your brother Nick’s footsteps and played gay, who’s on your shortlist of male romantic interests?

That’s a great question. I’d say for sure Daniel Craig. I think Matthew McConaughey is a hunk of a man. I’d have to go with George Clooney. Older, mature men.

What message do you hope to send to people who are reluctant to support LGBT issues?

Look, we’re all human. Some of the best friends in my life are gay, and we don’t look at each other any differently, and it’s not like there’s any separation of who we are as people. Love is love. And if you have a problem with that, then you can just get out of this world – first trip to the moon, first trip to space – because I honestly feel like life’s too short to worry about dumb things like that. People are people, and I’m gonna help out in any way I can. And what better time than now?