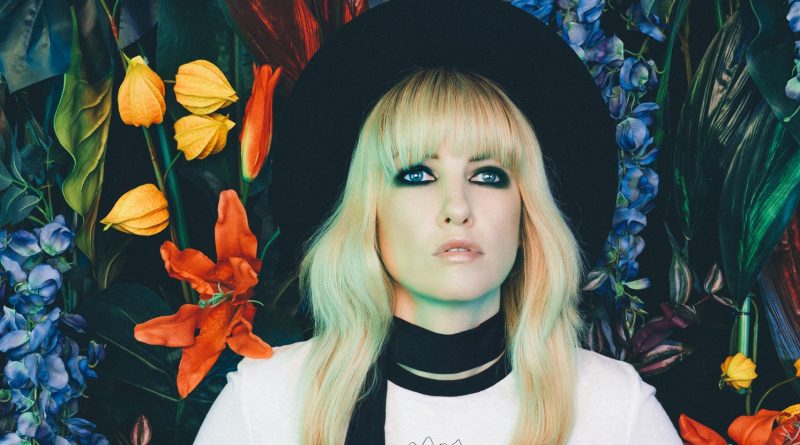 Indie-pop star Ladyhawke on coming out, her song with a former Scissor Sister and her constant sexual confusion

Here comes the bride… and the other bride.

It was as simple as that for Pip Brown, whose stage moniker is Ladyhawke. The New Zealand-born indie popster flew under the gaydar until 2015, when she announced her marriage to actress Madeleine Sami. During the six years leading up to the couple’s wedding, the 36-year-old musician, known for intoxicating synthpop earworms like “My Delirium” and “Paris Is Burning,” was writing about the “highs and lows” of their partnership. The result? Her third studio album, Wild Things, a buoyant love-smacked delight.

Hours before hitting the stage in Boston, the first gig on her American tour, Brown rang for a tell-all about the life few knew she was leading and the album she recorded that she never wants to hear again.

When did you know you were not straight?

As a teenager, I didn’t really understand anything about sexuality. I didn’t have any understanding of gay or straight; I had no one teaching me that stuff. I’m from a really small town in New Zealand, and I didn’t know any gay people. There aren’t any out gay people in my town, that’s for sure. And just… it wasn’t on my radar. So, I questioned, when all the girls were falling all over themselves to get to the boys, why I wasn’t like that – and still, I was best friends with all the boys. All my friends were guys and I was their “buddy.” I was like, “Why am I like this? And why do all their girlfriends hate me?” (Laughs). It took me a long time actually to realize what that was. I sort of thought for a while that I was bi, and so for a long time I ran with it. I just thought surely there must be some part of me that could fall in love with a guy, but I’ve never been in love with a guy. I do find men attractive. But I was quite confused and it sucks that that’s a thing because we’re not taught about that. We’re not taught that it’s OK to like someone who is the same sex as you. It’s really horrible growing up thinking you’re not normal.

Did you experience queer culture shock going from New Zealand, where you didn’t know a single gay person, to LA?

I actually haven’t lived in New Zealand for about 15 years; I left a really long time ago. I moved from New Zealand to Melbourne, Melbourne to Sydney, Sydney to London, and then to Los Angeles. Melbourne was the real defining city for me, where I sort of found myself more – not because of the epic gay community there, but because that happens to be the place where I realized for the first time that I had the ability to fall in love with a woman, which I’d never considered before. You know, then moving to LA after all of this, it’s just another city where I can be myself. There are definitely a lot of cities I would question living in because I just don’t know if I could walk down the street holding hands with my wife. It sucks that it’s still like that in 2016. I feel sad even saying that.

You saying that makes me think of the recent shooting in Orlando and how necessary it is that we have our safe places. How have you been processing the incident that happened in Orlando, and what kind of effect did it have on you as a queer person?

I just can’t even… I was so…. I cried. I absolutely couldn’t believe that. I’ve DJed so many clubs, so many gay clubs, and so that could’ve been any of my friends or anyone I know. I just… it was very close to home and I feel very sick about it. I was in the UK on tour when it happened and I had loads of friends at LA Pride. And I was scared. I was like, “Why the fuck am I scared?” It’s a horrible thing to be scared because of your sexuality. I was scared for my friends for being at LA Pride, for being proud of being gay, and for all our friends who are supporting them, all of our mates who are out there with us, side by side. It’s a disgusting thing. I just don’t even know what to say. I just can’t believe it’s still going on. It feels so medieval to me.

How have you used music to express your sexuality?

All things are fueled by my sexuality, basically. It’s who I am. I can’t really avoid it. And the confusion as well. My songs have always been full of metaphors and confusion; I think it’s part of life. I feel like sexuality is a spectrum; there’s no black and white; there’s no gay, straight, you’re this or that. And the more open people are about it, the more you realize not everyone is black or white. Some people are very gay, very lesbian, but there’s so much more to it than that.

Where do you fall on the spectrum?

I don’t know. My sexuality has confused me my entire life and it still does to this day, and I think it’s because it’s not taught to us in any way. It’s always been an embarrassment. It’s like, “Don’t talk about it”; it’s hush hush. You know when you’re a little girl you play with dolls? I wasn’t that girl. I was the polar opposite. I was a tomboy. I played with trucks and Transformers. So, I don’t know where I fall. All I know is that I am attracted to women, but I don’t rule out that I could ever be attracted to a guy – I just haven’t ever been. I can’t say what the future will hold, but I know that I’m married and I love my wife.

Did you pull from that relationship when writing Wild Things?

Oh god, yes. I’d actually finished pretty much the whole album right before we got married and then I properly completed it two months after we got married, so the whole buildup to our wedding was me writing and reflecting on the last few years of my life and the experiences I’ve had and on finding somebody who you go through highs and lows with and still get through it and realize you’re with your best friend. I think that was one of the most rewarding conclusions I ever came to. This album is a timeline of all these things I’ve gone through.

Tell me about your favorite part of recording “Chills” with Scott Hoffman, also known as Babydaddy from Scissor Sisters.

Scott is one of my favorite people in the world! He’s so funny and I just love him. I met up with him in New York and we wrote that song; that song happened quite quickly. He’s just a great musician all around. He was on piano; I was on bass. We just jammed it out, and then we had “Chills.” It was just a really fun experience, and I know we’ll do stuff in the future together because we’re friends and he’s just a great guy. I love him. He’s got the best sense of humor; he’s hilarious. And we relate to each other on anxiety and germophobia. (Laughs)

You recorded an entire album that was much darker from what I’ve heard.

Yeah, it was, definitely.

Why was that album so dark and why didn’t it get a proper release?

It got to the point where I had all these songs, and I remember playing them for my mom and I was in such a bad place at this point. I was feeling really yucky. Sad and gross. And I played the music to my mom and stepdad, and I just remember the looks on their faces really tore me up. They just looked shocked. Obviously, being used to me making somewhat upbeat music and then hearing this, I think it was more the lyrical content – it was just dark, dark music. And I remember my mom saying to me, “I can tell just by listening to this how bad you feel.” And that was the moment when I went, “Right, I need to sort this out. This is so bad. I can’t have a record that in 10 years time I’m not even gonna wanna listen to because it’s going to remind me of a shitty time I went through. I need to fix myself.”

Was it cathartic making it?

Yeah. It was good making it. It was also painful making it. I just didn’t enjoy the process. I’ve always said I love being in the studio, but it was just hard. I was so depressed. I couldn’t really focus properly. I was blowing off appointments as well. I would blow off writing sessions. That’s not what I’ve ever been about in the past, and I knew I needed to cut that out. I needed to stop drinking. First, I needed to just sort my life out, and my health, and my mentality. And that’s exactly what I did. It took me ages. All the tours that I’ve done that have given me the flu, that have kicked my ass, just trying to stop drinking and getting to the point where I was starting to feel really good and not having anxiety panics on the daily – that was harder.

Based on Wild Things, I’m guessing you’re in a much better place.

(Laughs) I was! This is gonna make me sound like I dated loads of girls – which I didn’t! – but I would always bring my girlfriend to whatever press I was doing. My girlfriend would be at everything. This is before Madeleine – well, Madeleine would come to everything too. But I would always bring my partner to everything: video shoots, press, shows, everything. And no one batted an eyelash! I always quite laughed at that. I thought it was quite funny. But yeah, I never even got quizzed on it.

I remember my manager being like, “You don’t really ever talk about this.” And I was like, “No one ever asks me!” He was like, “Why don’t we just tell people you’re married?” But I’ve been out for forever. Everyone knows. I dated guys – I’ve had boyfriends – but it was never anything serious for me. It wasn’t until I had my first girlfriend, I was like, “Uh, I see. This is a thing.” So it’s been so long for me that I just forgot that it was even a thing, you know? I know it’s so different when you’re really young and you’re just coming out and you’re realizing who you are and you have your entire family to tell. I remember that feeling. I know it’s incredibly hard. But this was so different for me because it’s no secret (laughs). I like the way we did it, though: “Yeah, she’s married.”

Exactly. Getting married is such an important step in a person’s life and it was something I was proud of as a human being. I’d always been such a – I couldn’t really commit to anything; you can see that from how many different bloody cities I’ve lived in! (Laughs) I can’t really stay still.  I’m always jumping around from place to place to place, and so this was important for me and I wanted everyone to know. I wanted them to know that this was huge decision for me and that I was proud of taking this step.