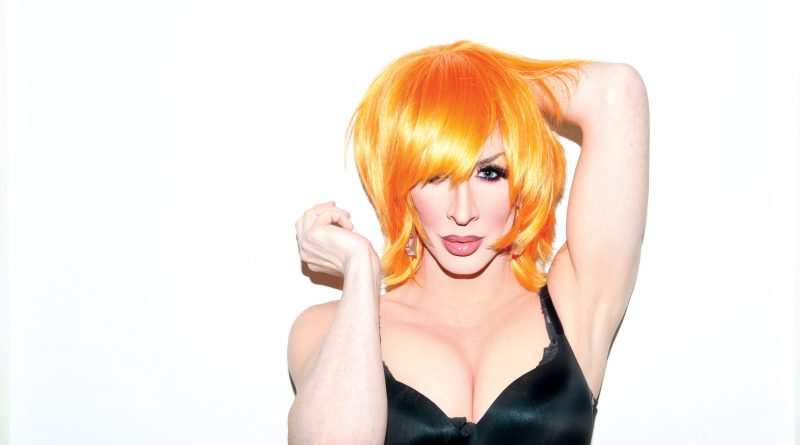 As one-third of the popular parody trio DWV (Detox, Willam, and Vicki Vox) putting out singles and viral video parodies like Boy Is A Bottom, Silicone and Blurred Bynes, drag star Detox took her popularity and talent to another level and became one of 14 queens cast to compete on Season 5 of RuPaul’s Drag Race, the season many fans believe to be the best in the reality show’s 8 year run. Her fourth place finish that season helped create her high demand and continuously booked calendar with gigs across the world, as well as increased popularity amongst fans of drag around the globe. So, it wasn’t surprising when Detox’s name appeared among the 10 queens chosen to compete on RuPaul’s All Stars Drag Race 2 premiering August 25 on Logo TV. Also not surprising, Detox joins 4 of her other Drag Race Season 5 alums on All Stars 2 including her clique partners of ‘RoLaskaTox’ (Roxxxy Andrews & Alaska 5000). Will Drag Race prove sweeter for Detox the second time around? We’ll have to tune in and see, but San Francisco fans will get a chance to give her their personal well wishes when Detox headlines SF gay nightlife promoter Joshua J’s Big Top 9th Anniversary party at Beaux Dance Club on Sunday, August 21, just days before the All Stars 2 premiere. I had an opportunity to get a dose of Detox before her long awaited return to San Francisco and chatted about her All Stars 2 selection, her continued relevance in the drag scene, her music career, and love for San Francisco.

BeBe: Congratulations on your selection for RuPaul’s All Stars 2. It’s definitely a testament of your ability to stay relevant after your appearance on RPDR Season 5. What do you credit your relevancy to?

Detox: Honestly? My humility. I’m easy to work with, I’m kind, and I’m a good time. I mean, I know I’m fierce and shit, but I attribute my constant schedule to being a nice person who people want to work with.

I always thought I’d see you become the Nikki Minaj of drag and appear on every gay recording artist’s single releases after the fall of DWV. Has the music stopped for you?

Not at all! I’m just focusing on other projects at the moment. I have a few things coming out this year, but, to be completely honest, I don’t want to put stuff out just to have it out there, ya know? I want to release content I’m in love with and I just haven’t been in love with much. I need to disappear and get inspired!

I would think All Stars would be even harder than the regular season competition to win the crown since you are really up against the best of the best… Have you, figured out how to win the All Stars crown?

We’ll have to wait and see, won’t we?! I will say this, I’m much more present this time around. I had a lot on my mind during season 5 which ultimately held me back from fully performing at my best. I’m not necessarily a different person than I was during season 5, but I am definitely more focused and realized and authentic. We’ll see if that’s what airs though!

All Stars reunites you with 4 of your shenanigans makers from RPDR Season 5. Is this just a Season 5 redo?

Absolutely not. But I will say that it speaks volumes to the caliber of talent that was on season 5. Obviously there’s going to be a lot of opinions about how many of us there are on All Stars, but All Stars is all about the best of the best, and I feel our entire cast is that.

San Francisco hasn’t had an opportunity to see you often over the past 3 years… How special is it for you to share a rare SF performance during Big Top’s 9th Anniversary celebration at the multiple award-winning nightclub Beaux?

I-Fucking-Love-San-Fran-Cisco! Everything about it is beautiful…the energy…the people…the scenery. I want to be there all the time. I hate that I’m not there more often. I love Joshua J (Big Top creator/promoter)! I have a feeling it’s going to be a very dirty night!

On Sunday August 21, the Gay club scene will be showing up to join party promoter and Beaux Dance Club GM Joshua J in celebrating the 9th anniversary of Big Top. Joshua J’s first solo undertaking as a club promoter, Big Top kicked off his successful series of weekly and monthly parties like Booty Call Wednesdays (with Juanita MORE), MR. (with Juan Garcia) and Stallion. Big Top has called The Transfer, Club 8, and DNA Lounge home over the years, but it has made the multi-award winning Beaux its home for the past 2 years. “…it blows me away that Big Top was meant to be a one night only party and here we are 9 years later, stronger than ever, with hundreds of party goers coming to “turn up” every week,” says Joshua J. The 9 year celebration isn’t holding back on star power with hosting duties being filled by Sister Roma and crowd favorite Au Jus ring mastering the performance acts including local drag star Abominatrix (LQQKS) and headliner RPDR All Stars 2 and Drag Race Season 5 alum Detox Icunt. “When I thought about who to headline the 9-year anniversary, Detox was my first and only choice,” points out Joshua J. If you thought you might have gotten enough of Big Top after 8 years, well, at Big Top, 8 is never enough. Big Top 9 is here!

BeBe: It’s another anniversary for Big Top, but after 8 years how come the 9th Anniversary doesn’t feel like a routine affair? What’s your secret to keeping each year epic?

Joshua J: You know after 8 years, Big Top is its own animal, recreating itself with new blood, sweat, and talent every year. Miss Au Jus, the hostess and emcee of Big Top, does a phenomenal job booking fresh and interesting talent. Alexis Lucero, assistant manager at Beaux, does an amazing job at hiring only the hottest Big GOGO Tops on the scene. Look for new crowd favorites Brandon, Graham, and Gage, these muscle studs truly know how to put on a show.  DJ Becky Knox never disappoints, with her signature big room, booty shaking, dance remix sets. The dance floor is always packed with a brilliant crowd of dancers, voguers, posers, and cruisers.

How true to your original concept for Big Top has the party been able to maintain with all the changes and challenges in the San Francisco nightlife scene?

The original concept for Big Top was and still is, A Homo Disco Circus. This gay circus is a mix of drag queens, DJs, gogo boys and those that love them. Nine years later and the concept has not changed, however the venue and cast have. As for the changes and challenges of SF nightlife, I am not sure that Big Top has been affected, as it has always welcomed the newest generations of scenesters, performers, DJs, and freaks. Come one, come all…everyone is welcome at Big Top. I think that is what sets Big Top apart from other parties and events in SF, that it is a diverse mix of everything and everyone. You really cannot define or label Big Top as one thing. Big Top is everything and nothing at the same time.

Can you give us a sneak peek into the Big Top 9th Anniversary affair?

I am really thrilled about the Big Top 9 Year Anniversary party at Beaux. The 9-year anniversary promises to be gag worthy with an All Star cast, literally, with the top tier of SF nightlife performers, dancers, and personalities. Of course, our leading lady and ring-master Miss Au Jus will be conducting the show and dazzling the crowds with her live vocals. My dear friend Sister Roma will be hosting the night and promises to roast and read me to filth on stage. One of my favorite SF alterna-queens, Abominatrix will be slaying with looks and visually haunting performances. Of course we have a very special guest as well…

Speaking of your very special guest, the anniversary celebration includes RuPaul’s Drag Race alum and All Stars 2 contestant Detox who was in your plans before the All Stars 2 roster was announced. Why is Detox a perfect fit for this celebration?

This is true, I booked Detox for the 9-year anniversary while at RuPaul’s Dragcon in LA, long before the All Stars 2 cast had been revealed. Detox and I have been friends after meeting backstage at a nightclub in LA, and nearly as long as I have been throwing Big Top. We instantly hit it off as we are both nightlife maniacs and always ready for a good time. We have worked together, partied together, laughed together, and have always supported each other in whatever projects we are working on. Detox has performed at Big Top before, been to Big Top to party, and loves the SF scene. When I told Detox that I wanted her to appear at the upcoming anniversary party, she instantly said, “Let’s do it!” Then the All Stars 2 cast was revealed making the appearance even more exciting for her fans. It promises to be an unforgettable night.

You are one year closer to the big 10 Anniversary. What do you have planned for Big Top leading up to that amazing milestone?

OMG, 10 years? That is CRAZY! Well, we will continue to bring in world class talent and performers including (RuGirls) Cynthia Lee Fontaine (Sept. 4), Trixie Mattel and Katya (Sept. 18), Alyssa Edwards (Oct. 2), and Tatianna (Oct 16). Miss Au Jus will be booking legendary queens from all over this great gay nation. No one knows exactly what the future holds, however I have a feeling that Big Top is entering its biggest year to date. Every week more and more thrill seekers come out to get their lives on the dance floor, see the best drag show in the Castro, get drunk and make-out. It really is the perfect party combination.   |