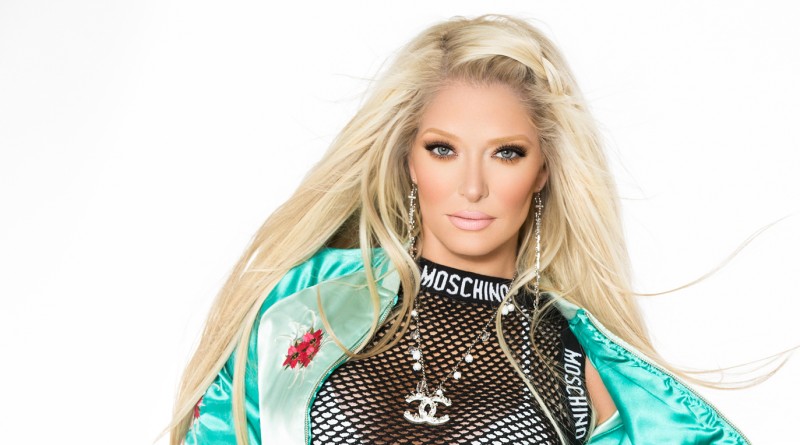 While most veterans of the gay club scene recognize her name from countless track dates at gay pride events ranging from Pittsburgh to San Jose, Erika Jayne recently burst into the mainstream spotlight as the latest addition to the cast of Bravo’s “Real Housewives of Beverly Hills” (alongside series cornerstone Lisa Vanderpump).  But there’s more to this tireless 44-year-old blonde whirlwind than meets the eye…or ear!

As the wife of 76-year-old Erin Brockovich attorney Thomas Girardi, she fits the Beverly Hills housewife profile to a “T.” However, you won’t find her slaving over a hot Viking stove all day in her designer kitchen.  Before joining the RHOBH cast in 2015, this Atlanta native parlayed her boundless energy into a club-hopping gay dance music career and created of her own record label, Pretty Mess Records.   In September 2014, she scored her seventh number one dance single with “PAINKILLR.”  Always at ease with her own sexuality, Erika has also frolicked her way across the social media spectrum posting provocative images fueled by her self-dubbed hashtag #theprettymess.

This spring marks yet another career milestone as Erika Jayne is named 2016 “Queen of White Party” by none other than “the high priest of gay parties,” Jeffrey Sanker.   We caught up with Erika in between backstage selfies and here is what she had to say:

How does it feel to be crowned Queen of White Party 2016?

EJ: I am beyond honored and I’m so excited to be your Queen of White Party 2016.

Do you have anything special planned for your performance to celebrate your coronation?

You have a huge gay following for your music, and now for your TV show.

What do you think it is about you that attracts such a big gay following?

EJ: In part it is the fashion, hair and makeup. The other part is my sassy and confident personality.

What do you do to get “psyched up” before hitting the stage?

EJ: Standing backstage, when I feel the crowd and I hear the music, there’s nothing better than that.

If you could do a duet with another Dance Diva, who would you choose?

What do you do for fun when you aren’t on stage, or on set?

If you could describe your life with just one hashtag, what would it be?  (Besides #ThePrettyMess)

What will you be doing five years from now?