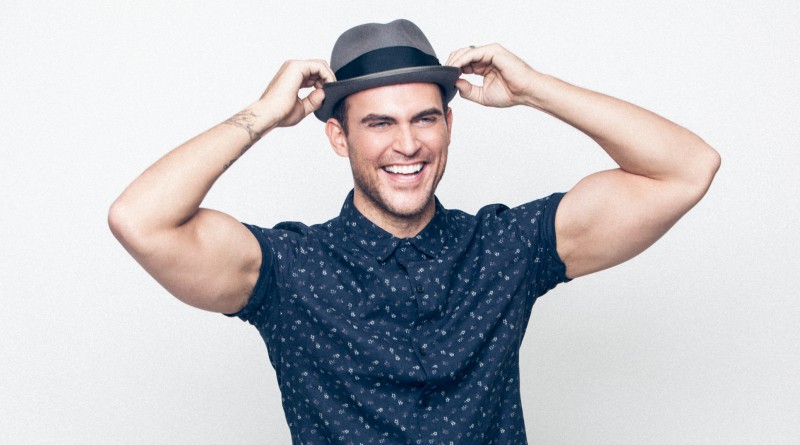 Cheyenne Jackson on Botox, his ‘bi phase’ & getting his butt grabbed by Lady Gaga

It’s a box Cheyenne Jackson can happily check off after his recent run on American Horror Story: Hotel, playing a bisexual fashion designer who, by the grace of Gaga, got felt up by Mother Monster herself. Of course the screen and stage singer-actor’s resume is far more extensive: Jackson has starred in a wide range of projects including 30 Rock, HBO’s Liberace biopic Behind the Candelabra, Glee and the 9/11-inspired Flight 93, portraying late gay hero Mike Bingham.

Jackson’s latest is Day Out of Days, directed by Zoe Cassavetes, the daughter of filmmaker John Cassavetes and actress Gena Rowlands. In the film, now streaming via Digital HD and VOD, he plays a gay derm lending his expertise to friend Mia (Alexia Landeau) as she tries to survive age-obsessed Hollywood. As an out gay man, Jackson knows the struggle, but he’s stopped caring.

In a new interview with Jackson, the actor discusses his “fuck it” attitude at 40 (no more Botox for him), the butt-grab GIF Lady Gaga sent him and his passionate feelings on the Hollywood closet.

You’ve played just about every variation of gay. How do you know if a gay character is right for you?

I never pick something based on if it’s gay or not. I just pick something if the character’s right for me. I play a pretty healthy mix, although these days I’ve been playing a lot of bisexuals. I was bisexual on Horror Story and then I just finished a film where I also played bisexual, so I’m in a bi phase right now. Honestly, just the part has to appeal to me. I really do love that there’s such a broad spectrum I’ve played: gay guys who were more straight down the middle, and – though I hate this phrase – “straight acting,” and all the way to Behind the Candelabra where I was just, you know, super cunt-y.

When it comes to roles in general, how many scripts do you end up passing on?

I make no bones about it: I’m not in a world where I just get offered all of these movies by any means. I’ve never put a number on it. I would say maybe five to seven offers a year and I’ll do a few. It just depends. Doing a movie, especially an indie movie, you really have to love the subject and you really have to love the writer / director. It’s such a labor of love – and I know it’s an overused phrase – but it is if you’re gonna be putting your blood, sweat and tears into it. And also, I don’t wanna take time away from my husband and my home and my family just to do a little thing.

While shooting _Love Is Strange_ with Alfred Molina and John Lithgow, it was said that you informed them on gay vernacular, such as what it means to be a “bear.” As the gay guy on set – maybe sometimes the only one – do you find yourself schooling your straight co-stars on everything gay?

Oh, well, I’ve never been the gay actor on set – maybe I’m the only openly gay actor. But yeah, listen, I’m happy to be the go-to if people wanna know what shit means. I’ve been out since I was 19, so I gotta do something with all this information I have!

You suggest that you’ve worked with many closeted gay actors, and we talk a lot about the Hollywood closet. Where do you stand on that?

It’s a personal thing. I mean, everybody should do their own thing, what is right for them. I hate it when people try to pull people out of the closet – who wants that? It’s not good for them, it’s not good for us; for whatever their own reasons are, they’re not ready. Just leave people to do their own thing on their own time. I fully believe that. I mean, I came out when I wanted to because it was my time, and I hate the whole witch-hunt aspect. Just mind your own business.

Regarding American Horror Story: Can we expect you in future seasons?

I hope so. We don’t know yet. I think we’ll all be finding out in the next few months.

How aware are you that you’ve made just about every gay man jealous by having your butt touched by Mother Monster?

(Laughs) Oh, I knew! I knew as we were shooting it. We got to that scene, and it wasn’t in the script exactly like that. But Gaga is so playful and comfortable with scenes like that and with her body. She was really fun and she put me at ease because I had never done a scene like that. So, we were just kind of playing around and she and I have such a comfort with each other, so between set-ups I laid down for a minute and she just started, you know, rubbing my butt and I’m like, “Ooh!” The director was like, “Oh, great; let’s just do that,” and that became a thing and I thought, ‘Oh, shit. I can see the screen caps now.’”

You know, there’s actually a GIF out there.

I know. She sent it to me that night. (Laughs)

Who was guiding who during that sex scene?

It was definitely a give and take. I was nervous going into it because I had never really done nudity onscreen, but she’s just great. I echo what everyone else says about working with her: She’s a total pro.

I was surprised to hear that you hadn’t done a sex scene up until that point.

What’s next for you?

I have a couple of things in the works. Right now I’m in New York doing _The Secret Garden_ at Lincoln Center and I have a couple of other things lined up but can’t talk about them because they’re not signed on the dotted line. And I’m actually recording (a new album) in March in New York. I don’t know if I wanna talk about what’s on it yet, but it’s definitely some covers and new stuff – stuff I’ve kind of been touring with the last few years, but I don’t wanna say some of the names just yet.

Like Mia in _Day Out of Days_, you’re also 40. Have your experiences in Hollywood been similar or different from Mia’s? And in what ways?

Yeah, definitely different, because I’m a man. It’s a different thing for women. Aging in Hollywood, as we all know, can be brutal, especially if you’re a woman. It’s a subject that people have talked about before and even made art about, but I like this particular story that Zoe’s telling just because it’s from one woman’s perspective, and I thought it was pretty great. Personally, I like getting older, and as a man, I like what’s happening to my face. Yeah, sometimes it’s hard to see more wrinkles and grey hair, which I’m totally getting, but it’s way easier for men – way easier.

I’ve been thinking about this since doing this movie, when you do see the occasional actress who doesn’t do anything to her face, like Kate Winslet – I saw something recently, and we’re the exact same age – and she has some wrinkles and she looks gorgeous and I loooove it. Oh my god do I love it. It’s so beautiful.

While we’re on the topics of ageism and sexism, I recall your nude leak. I wonder if there’s a gender disparity when this sort of thing happens like it did to you a few years ago, when a video surfaced. Do you think there’s a difference in the way the public reacts to a male celebrity’s leak – in this case yours – versus a woman’s?

I’m not gonna speak to that at all.

Fair. Let’s move on. As a gay man, what kind of effect has sexuality had on your career?

That’s a good question, but there’s really no way to know what would have happened. I have been out my whole career. I came out during my very first big job in All Shook Up (in 2005) on Broadway. It was in The New York Times, and I just decided to get it out of the way so it wasn’t a thing. What effect has it had? I have no idea. Do I think I have missed out on things because I am gay? Maybe. Probably. But there’s no way to prove it. And if that’s really how something would go down, I wouldn’t want that (project) anyway. But things are definitely changing, and it’s funny that you say “as a gay man” because I find pressure on gay men, especially in our society, to look young. It’s almost like it is for women now. I see all these guys at the gym and everybody’s – well, not everybody, but a lot of guys – have a lot of stuff going on with their face.

Do you feel like you’ve been pressured to look a certain way?

Of course I feel the pressure – and I succumbed to it. I’m not against saying I used to do Botox and fillers for about three years. I got really into it.

Why did you decide to stop?

I looked crazy. I didn’t look like me. I think especially on men, Botox and filler doesn’t make you look younger – I think it makes you look like you have Botox and fillers. It changed the shape of my eyes. I didn’t have any wrinkles on my forehead, and it was crazy. And then I started to obsess about every little thing. Then three years ago I was like, “Fuck it. I’m just gonna let my face do what it’s gonna do,” and I’m so happy I did.