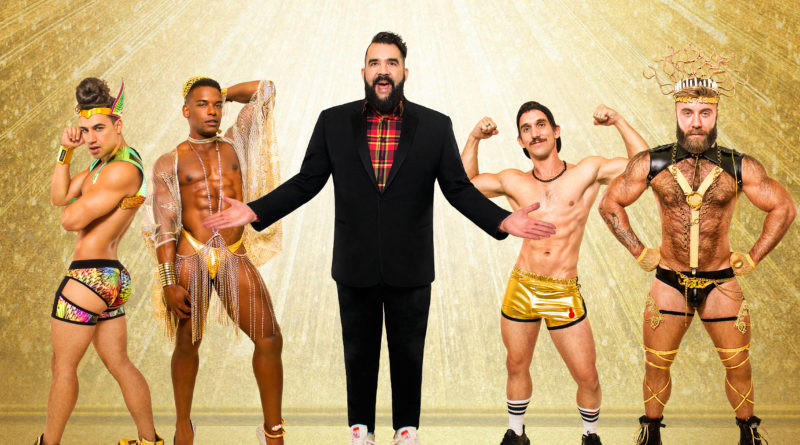 GOGO FOR THE GOLD!

Everyone’s favorite Hey Qween host Jonny McGovern and his bestie, GoGo veteran and Only Fans top earner Greg McKeon are on the hunt for America’s next champion GoGo superstar star in OUTtv’s hilarious new competition series, GOGO FOR THE GOLD.  “The queer community has spent the last decade celebrating the queens on Drag Race, but the other stars of the gay club are the GoGo boys,” says McGovern.  “They, too, serve the looks with tons of personality and style and they never hold back on the drama. We’re crowning America’s #1 champion GoGo superstar star … and the competition will be fierce!”

GOGO FOR THE GOLD co-creators McGovern and McKeon have assembled a diverse cast of GoGos that encompass a wide range of body types from traditional masculine hunks to thick ‘n juicy bears, smooth twinks and even femme dancers who serve it up in heels.  One of the contestants is a trans man.  All are competing for a $10k cash prize.

To win, they must undergo a series of challenges that comprise the many facets of being a champion GoGo.  Being a skillful dancer is pivotal, of course, but GoGo boys are also influencers, fashion models, and nightlife representatives.   As contestants on GOGO FOR THE GOLD, their journey will be packed with humor, dramatic twists, and tongue-in-cheek fun.  There may even be some tears shed along the way.

Judging the boys will be the “GoGo Gods,” headed by supreme GoGo veteran Greg McKeon.  Each judge scores based on four important criteria:  Fantasy, Body, Dance and Individuality. One or more GoGos are eliminated each week until the final strip down when GOGO FOR THE GOLD crowns its STUD — super talented underwear dancer — and officially proclaims him as ‘America’s #1 Champion GoGo Superstar Star ’.

“I started GoGo dancing while I was a student at UC Berkeley,” says Greg McKeon. “I was really shy at the time and when I first stepped up on top of the bar, my heart was racing.  But I relished in the attention! That first night, I made over $500 and I never looked back.”

McKeon credits GoGo-ing with launching his career in Hollywood. He has landed multiple roles in movies (including Eating Out) and TV shows (Nip / Tuck and Teen Wolf).   He was the resident lap dancer on Jonny McGovern’s popular OUTtv talk show, Hey Qween.

“Greg and I first met on the set of my ‘Sexy Nerd’ music video,” Jonny McGovern explains.  “We started our partnership by throwing some of the hottest parties in LA.”

“The parties we threw all centered around the GoGo boy,” McKeon jumps in. “We would develop the guys, teaching them the ins and outs of being successful on the box and working with them individually to elevate their art.”

They aim to do the same on GOGO FOR THE GOLD, but this time in front of millions of fans cheering the GoGos on at home.    “There’s never been a reality competition show that showcases the talent, ingenuity and sexiness of the GoGo boy,” McKeon reflects.  “This will be the first time that GoGo boys will be given the spotlight they have long deserved.”

Jonny “The Gay Pimp” McGovern’s career in nightlife entertainment began twenty years ago with Dirty Gay Hits, his collection of hilarious gay themed songs that received over three million downloads and was added to rotation on MTV. It led to McGovern appearing all over the airwaves, on The Ricki Lake Show, VH1’s Best Week Ever, Comedy Central’s Out on the Edge, and eventually catching the eye of Rosie O’Donnell, who cast him as a lead player on her LOGO-TV comedy show, The Big Gay Sketch Show.  Today, Jonny is best known for his popular Netflix shows Hey Qween and Look at Huh. Most recently, he became a TikTok sensation with “Man Areas,” a song from his Gayest of All Time album.  The song has appeared in TikTok videos viewed over 12.5 million times and has received over 7 million streams on Spotify.   Jonny is currently touring the UK with burlesque legend Dita Von Teese and has been performing “Man Areas” nightly to standing ovations.

Greg McKeon is currently working on his book, “GoGo for Love,” chronicling his ten years as GoGo dancer.  He is one of the top earners on OnlyFans and he and his husband recently purchased a Christmas tree farm in Portland, Oregon. “It’s a wild dream for a city boy like me to be living in the middle of nature, but thanks to Onlyfans, anything is possible,” McKeon says.   He and his husband often invite other top models from all over the world to the farm to film new OnlyFans content with them.  “I am so grateful to my fans for making this possible.”

“Success is not an overnight thing,” McKeon attests. “I have acted in web series and indie movies, performed at big party festivals and small dive bars and everything in between.  Just like GoGo-ing on the box, an adventurous life is unpredictable and a constant hustle.”

Jonny McGovern agrees.  “A career in the spotlight is about moving forward, shaking what your mama gave ya and always finding new, innovative ways to shine.”

For more information on GOGO FOR THE GOLD, visit OUTtv.com.

Follow Jonny McGovern on Tiktok @JonnyMcGovern and Instagram @jonnymcgovernisyourdaddy and tune into to his Gay Pimpin/Gayest Of All Time podcasts exclusively on Patreon at patreon.com/gayestofalltime