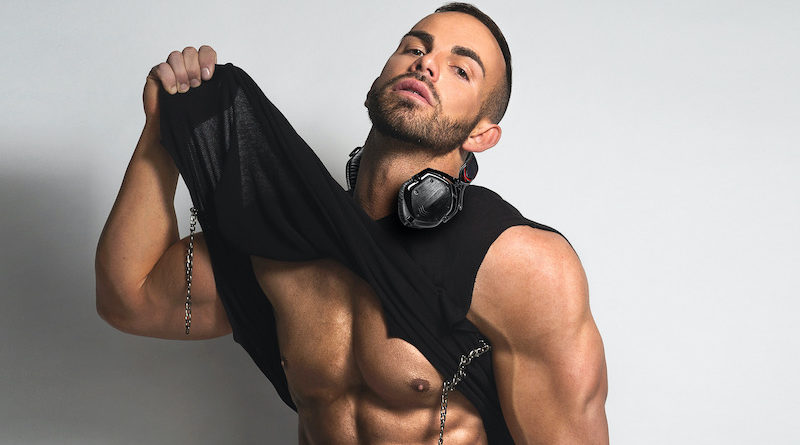 Nick Stracener was introduced to the dance floor at 18 when he went to his first rave in his hometown of Lindale, Texas. He was so fascinated by the sounds he heard, he moved to Dallas where he quickly ingratiated himself within the circuit community.

“Circuit music is so powerful and liberating because it’s easy to dance to and live your fullest fantasy,” he explains. “There are so many different types of circuit music and it’s really fascinating how unique they all are.”

Nick’s unique sound is best described as a combination of indigenous rhythms with lots of sultry uplifting, female vocals. To him, dance music is therapy and a way to escape life’s biggest hurdles. It’s why he was particularly drawn to Lindsay Lohan’s “Back To Me,” a song about shutting out negative energy and rediscovering self.

It is a relatable message to Nick whose popular social media channel often invites criticism. He uses the platform to show off his bodily accomplishments, yes, but it is also a place for him to release heavy matters that are weighing on his mind. We spoke with him from his Dallas home where he was quarantining with fiancé CX and their two pooches.

Olsen: How have these months in quarantine been for you?
Stracener: I had just started making a name for myself in DJing and getting booked in cities all over the country when COVID hit. I’m also a flight attendant, so the pandemic has hit me hard.

Have you used the time to work on more tracks?
I sure have. I recently released an hour-long mix in honor of my friend Dave Bowman who passed away. I also have a remix or two in the works.

The new Lindsay remix is spectacular.
Thank you so much, I appreciate that! I taught myself to produce and DJ from online training videos.

Wow! Have you always been musical?
I was a band geek all the way through college. In fact, I went to school on a saxophone scholarship.

It’s rare to meet a band geek Adonis!
I wouldn’t consider myself an Adonis by any means, just a guy who likes to stay fit and healthy. I haven’t always been muscular. It’s not easy, not for me, at least. I have to maintain a strict diet to keep my abs, and that’s not fun.

Do your 200K followers on Instagram motivate you?
My followers are the best and the most loyal. I receive a lot of messages with words of encouragement from my followers and I’m very thankful to have such kind people in my life.

Now we ain’t complaining at all, but what’s up with all the booty shots?
(Laughing) I’ve worked hard for it, so I like to show it off.

If you got it, flaunt it. You definitely got it!
I feel that if you have the confidence to flaunt, then you should be proud of yourself because most people don’t.

As a flight attendant, how many phone numbers are slipped into your pocket each week?
Honestly, I don’t get a lot of numbers at work. I think that’s a common misconception about flight attendants. Most of us keep are interactions with passengers very professional. I did have a guy in first class one time who was belligerently drunk. He approached the galley as I was preparing a meal and we got into a conversation where every chance he got he would hint that he was gay, but without saying it. He then asked if I was married, and if it was to a guy or a girl. It got awkward. My face turned bright red.

What makes you smile, Nick?
People having fun while dancing to my music.

Which celebrity would you most like to slide into your DMs?
Taylor Swift.

If you could travel back in time, where would you go?
I would go back to my childhood and tell the young Nick that everything will one day be okay and that he shouldn’t feel discouraged as he has so much to look forward to.

Are you superstitious?
I can be. I believe bad luck comes in threes.

If you were given three wishes, what would they be?
That my parents would always stay healthy; that I would have money to buy whatever I wanted; and third, meet Taylor Swift.

Taylor Swift? Really? OK. You’ve been given 24 hours to live. How do you spend your day?
Surrounded by my closest friends and my family and then a circuit party at night to close down the house.

Now we’re talking! What superhero do you most identify with?
I don’t know much about superheroes.

You’re adorable. What’s the first thing you’ll do when you step back into the DJ booth?
Honestly, I’ll probably cry tears of joy.