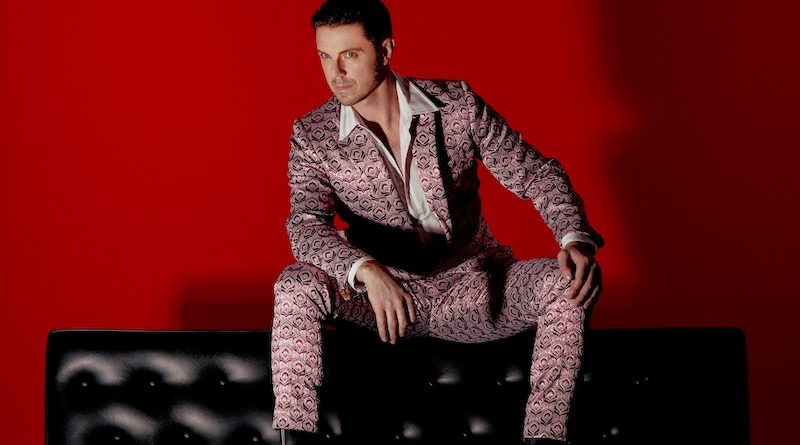 Chill vibes permeated his 2018 self-titled solo album, but Jake Shears feels like dancing again. Shears’ latest single “Meltdown” is a club-made banger with shared Scissor Sisters disco DNA – which is exactly the point. Because even though the band has been on a hiatus since 2012, the glam-rock group’s frontman says his latest solo music is an extension of their legacy.

From New Orleans, Shears talked about the constant “are the Scissor Sisters reuniting?” question, why Judith Light should play him in a biopic about his life, and how his Masked Singer unicorn costume got him DMs from the plushies community.

What did you want people to feel when they heard “Meltdown”?

I wanted to make people dance. It’s absolutely my straight-up tribute to the fabulous Sylvester in such a big way. I wanted it to really invoke that kind of carefree spirit through the vocal styling and the bassline and just sort of how the song is structured, but at the same time I also wanted the song to feel unsettling and a little bit creepy (laughs). I don’t know why I always tend to have a creepy streak run through my stuff, but I like stuff with a little bit of a dark edge.

The last record sounded a lot like you were cutting the umbilical cord.

(Laughs.) I think that’s a good way of putting it. I just made the last record with almost a set of rules. It was creative in a very specific way. So now I’m feeling like I can kind of throw the rule book out the window at the moment and just make some dance music again. It’s been a while since I fully made a carefree club song.

How far along are you?

About half of the record is done. The songs are so fucking good. I’m really very excited about them. They share a common feel. And yeah, I’ve just got a bunch of great singles right now.

When we last spoke, you talked about how joyful music is important right now, when things happening in the world aren’t all that joyful. Is that vibe something you’re bringing to the rest of these tracks?

Yeah. The music is super fun, but it’s – I don’t want to say it’s cynical because I’m not a cynical person at all. It’s just a little more abstract. I was just reading an article in the Times about TikTok killing the radio songwriter and all kinds of contemporary pop records. It’s changing songwriting, and there’s this whole piece about it. And I guess. I mean, I don’t listen to a ton of contemporary music, but people are only really writing lyrics that are words that would only actually come out of their mouths in conversations. I guess a lot of pop singers are basically only singing things that they would say. That’s not what I’m doing. (Laughs.)

So you’re not writing this album for the TikTok audience?

That’s the thing: Who knows! There’s an old Scissor’s song that’s just been making the rounds on there. Do you know the song “I Can’t Decide” off Ta-Dah? If you go on Spotify, I think it’s our most played song now. It became some fucking meme. But, basically, every teenager knows this song (laughs). It’s very strange.

I guess you can’t really think about how a song will impact an audience at this point because there are just too many ways it can.

Yeah, I just don’t even think about it at all really anymore. It’s the kind of thing where I don’t know at this point; it’s sort of all bets are off. And there’s so much music that gets put out. We’re sort of living in this time where there’s this excess of music. There’s too much music out there, and there’s too much stuff to sift through. I think it’s a really difficult time for listeners, that is if people are even really listening.

So now I’m just sort of making this stuff for pleasure and passion, just stuff that gets me excited and stuff that I like to listen to. I mean, when I make a good song, I play the hell out of it until it comes out. Once it’s out, I never listen to it again (laughs). But I will basically make stuff that I like to rock out to, even on my own.

I imagine that was more difficult to do in the band. It was a collaboration, so you all had to be in agreement.

Yeah, I mean, some of the time (laughs). No – it would be that way in the Scissor Sisters, but this stuff doesn’t have to go through as many filters.

What does the culture of where you live now – in New Orleans and sometimes in Louisville, Kentucky – bring to you creatively?

In New Orleans, I can turn everything down a bit. I get so much stimulation, and I’m so stimulated day to day in my life in general, so I come to New Orleans to really slow down. It gives me the space and it gives me elbow room. I just do a lot of reading and writing and fucking playing video games and hanging with my dog. I really have it to kind of unwind and sort of reset. I’m buying a house down here. I’ve got an apartment here that I’ve had for four years and now I’m fully sort of … I don’t know, it’s weird. My life has felt very sort of unmoored the last four or five years or so. I’m at this point where I really do need to put down some solid roots and really make a new home for myself because I’ve really been living out of a suitcase the past couple of years.

That’s a life you’re used to.

It’s true. But also, I’m 41 years old (laughs). And it’s really easy to just not commit and keep floating, so I’m just trying to make some strong commitments in my life just to anchor myself a bit.

Are you bored yet with people asking you if you’re ever going to reunite with the Scissor Sisters?

I mean, it’s sweet, but I’m already giving you what you’d be getting. These would be the Scissor Sisters records for the most part (laughs). In general, this would be the stuff that we’d be putting out. So it’s a bit of a confusing question. But I know, I understand. There’s a magic, especially live, seeing everybody together. But musically I feel like I’m continuing the legacy of the band. I’m definitely not reinventing a wheel when it comes to my own stuff. This is just the stuff I like to make.

If you’re going back to this disco-dance-club sound, why not make it with the Scissor Sisters?

(Laughs.) Because I don’t feel like twisting anybody’s arm. I don’t want to pull teeth to make it happen. I’m sure someday we will write again, there’s no doubt. But no one’s really chomping at the bit. I think I’m kind of the only one who really truly loved it. Being in the band, everyone sort of answers to this entity, which is this thing that you’re doing together. It has the last word. And I think after a long time that gets frustrating for everybody, especially if it wasn’t necessarily what you thought you’d be doing with your life. If everybody wanted to do it again, I’d be super happy to, but I would want them to want to do it and do it for the pleasure of it. And I’m sure someday maybe they’ll get the hankering for it.

You were recently revealed as the masked singer on the UK’s version of The Masked Singer. How did you go about picking the songs you sang on the show?

I just had a long list, and my number one: I really wanted to do “Babooshka” by Kate Bush. In the UK they hadn’t had The Masked Singer yet so this was the first season, so I wanted to do something that the British public would know, sort of a standard song over there, but still a weird one.

It was truly not the easiest song to start off with. Just singing under that thing was really, really tough. But they were all hard. The other ones were even kind of harder, but I was getting used to it. You just can’t breathe in there. You’re out of breath the whole time. But they let me choose the songs and my “Girls and Boys” cover (originally by Blur), I was really proud of. It was just so much fun. It was a blast. I was devastated when I got unmasked. I truly was. I was really bummed out. (Laughs.)

I imagine for some people seeing you in a unicorn costume was a different kind of thrill. Did some plushies slip into your DMs?

Yeah, I got a lot of DMs telling me that people thought it was very sexy, that unicorn outfit, so there were definitely some furries or plushies or whatever that were super into it. (Laughs.)

Have you thought about who you might cast as you if a biopic based on your Boys Keep Swinging happens?

Yeah (laughs). If it were me at 20 years old, she would be amazing as my mom. I mean, she’d be so good. God, I’m trying to think who would play me.

Keep in mind we have access to CGI and other post-production tricks.

What about another book – would you be up for writing one?

Yeah, I would love to. I’m planning on someday writing another one that starts where this one left off. That one finished in 2006 and we’re in 2020 now, so I would probably need five more years and I will write the next one. The next one would be even trashier and juicier than the last one. My 30s were pretty decadent. (Laughs.)