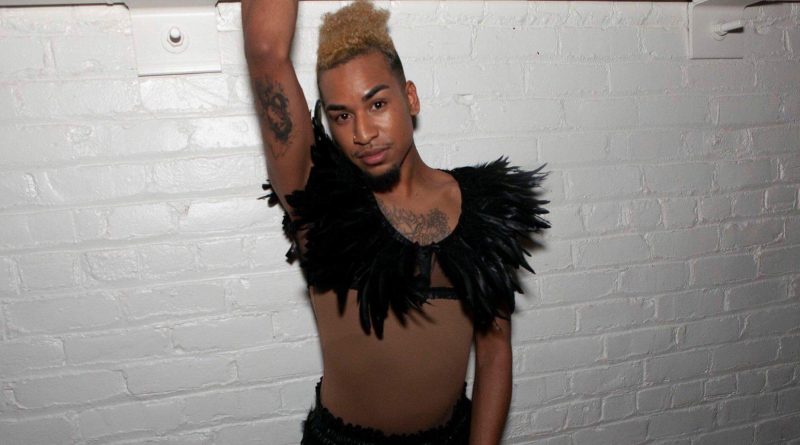 On Saturday, December 15th GLOSS presents CecilRussel’s POSE Winter Party and Runway Competition, inspired by the critically acclaimed television hit “Pose”, which has brought the incredibly dynamic and diverse-and until this point, largely underground- ball culture scene to a mass audience.  It did not take long for Gloss to discover that not just anyone can add the word “Ball” to an event, and as such the POSE Winter Party is admittedly NOT a ballroom scene competition, but rather an “only-in San Francisco” fun take on a glittery runway dance-off.  However, Gloss could not be more thrilled than to be able to feature on December 15th a spectacular guest performer and a true star of the Kiki ballroom scene, Mother Eve UnbotheredCartier (aka Julian 007).   We had the chance to sit down with Mother Eve for a little education.

Q:  Thank you for joining us, Mother Eve Unbothered Cartier!  How did you get involved in the ball community?

A:  In 2009 I was 17 and fresh out of high school, and I had a cousin who would go to the LGBT center in Oakland where all the girls would go and practice & have balls at.  I was a fresh face, and someone scouted me out and asked if I was in a house; all of this was new to me, so when the question was asked I said, “Yes, I live with my mother”.   It was funny because they had to break it down to me what they actually meant.

Q:  I recently attended my first ball ever, the House of Garcon 10 year anniversary Ball in Washington DC, and was absolutely blown away by the fierceness, excitement, and production.  What makes balls so competitive?  And so fierce?

A:  The passion people have about ballroom, and the talent they carry, comes from not having an outlet to express themselves.   Ballroom allows individuals to be free, and to express their feelings whether it’s joy, rage, or sadness.   It all depends on the individual; for some people this is a hobby, and for others this is their life.To me, what make things fierce is when you go up against people who challenged you to go outside the box. No one wants an easy win; well, at least I don’t.

Q:  How important is dance to ball culture?  Does one need to be a trained dancer to participate?

A:  Surprisingly, you don’t have to be a trained dancer.  I’ve met individuals who knew nothing about voguing but and over a few months picked it up quickly.  However, individuals who are trained indifferent styles of dancing such as ballet, modern, African are better with picking up faster and incorporate that into their vogue.  But if you would want to get out there and perform the right way without being chopped, learn the basic elements to voguing and practice them at home.  I myself am self-taught.

Q: We are so happy to have you as a special guest at the POSE Winter Dance and Runway Competition to bring some ballroom realness to an event admittedly NOT representing the authentic ball scene (although we are excited to work with the ball community to present a true mini-ball in 2019).  GLOSS learned quite a lesson recently, when despite good intentions it got “chopped” pretty quickly by the ball community for originally calling the Winter event “Pose Winter Ball”.   Can you explain why this caused such a reaction, and more importantly, did I just use the word “chopped”correctly?

A:  Not everything is realness!   The reason why there was so much backlash on this event is because, over the period of time recently that ballroom has been made public on social media and TV including “Pose”, “America’s Best Dance Crew”, “Star”,etc, a lot of individuals have been starting to profit off of a culture that was originally just a safe underground space for people of color to feel accepted and welcomed, embraced and loved. We are inclusive to other races of course, but mainly this scene’s focal point has always been trans women of color and people of black & Latin descent; other races were originally rarely seen.  Also, the fact that the categories were not properly broken down into proper ballroom terminology didn’t make sense <for an event that initially called itself a “Ball”>.

And yes, you did use the word chopped correctly.  Gloss got chopped (laughs)!

Q:  Why do you think there is suddenly such a huge interest in the ball culture?

A:  We have always been around!  We are makeup artists, designers, stylists and dancers.   We are the reason why women of color like Nene Leaks, and Tamar Braxton use the word “shade” and so much gay lingo.  We are trendsetters &innovators. The reason why we inspire individuals <to take interest> is that the talent is so raw, and it is thrilling.

Q:   How can someone interested in ball culture learn more or become involved?  Is anyone welcome?

A:  Depending on the region you live in, find out who are the house parents and the leaders of that region and just and talk to them.  All individuals are welcomed as long as they are respectful.

Q:  Can you explain the difference between the Kiki scene and the mainstream ball circuit?

A:  So, in the Kiki scene you get to play in categories you would not normally walk in the mainstream.  Kiki is for those kids preparing or who may not enter it at all.  It’s not as political & shady; it’s basically the Jr league.  In the mainstream scene there are much higher expectations; you are expected to be polished, and bring it full force.

Q:  Ball culture is one of the more diverse communities I have personally witnessed:  do you feel this is true, and if so why?

A:  Absolutely!  I walked into a world that In ever knew before.   I met individuals who truly gagged me when I found they were trans, and/or gay. People of the ballroom culture differ from people in the club scene because some of these families are truly family to each other.   Some individuals have been disowned from their biological family, and instead were taken into a house under the guidance of new individuals who would become their parents.  The saying “blood is always thicker than water” doesn’t always apply.

Q:  I recently watched the 1968 documentary “The Queen” and learned that ball culture evolved from drag pageantry (Crystal LaBeija).  Do you feel there are any similarities in the ballroom scene to drag pageants today?

A:  As far as having different categories yes, but they are different in many ways. Being in a house you’re on a team.  Doing a pageant you are more solo.  Everyone doesn’t do drag either; this scene is more inclusive to not just drags, but biological women, gay men of color, people of trans experience & of course drags, as well.

Q:  You mentioned to me previously there are different levels in the ballroom scene, such as legends, statements, and stars? What are these exactly and how do you achieve them?

A:  “Legend” is someone who paved the way in the scene.  They have been a mentor & offered guidance to the youth, they have traveled state to state, and have won countless balls.  Most of the time they end up parents of a house.  A “Statement”is someone who has hit the floor countless times, and has made a statement every time they hit that floor & performed. A “Star” is someone who is well known, and popular by demand every time that individual hits the floor.

Q: How does one become part of a “House”?

A:  You attend a ball and you walk and turn in.  Someone will scout you out, or someone will see something in you like they did in me, and work with you from the ground up.

Q:  Whom do you consider the biggest star of the ball scene today?

A:  The most known individual of the ballroom scene to me would have to be Leiomy Maldonado, also known as “Wonder Woman” (and aka “Mother Amazon”). She has been the face of ballroom as a true icon and innovator; she has defined gravity. She was the face of Nike in their pride campaign & commercial, she was on “America’s Best Dance Crew”, has been a model for the Wilhelmina modeling agency.  She has traveled the world instructing & teaching so many individuals, including choreographing for “Pose”.  This is what makes her the true Wonder Woman, and also my big sister!

Q:  Most important question for last:  what is the secret to a perfect “death drop”?

A: A death drop is not the proper terminology to the technique! <This writer hangs his head in shame>.   What individuals see when we lay out on the floor it is simply called a “Dip”.  I blame shows like Drag Race for using some of these words improperly. Love the show down, though; it’s a kee. You can see what Mother Eve Unbothered Cartier, aka Julian 007, is up to via Instagram (Julian_Vs_theworld) and on Facebook as Julian Thompson.    Also,  be sure to meet Mother Eve live onstage at the Pose Winter Party and Runway Competition, Saturday December 15th at Calle 11 at 1501 Folsom Street at 11th, 8pm-2am.  Tickets available at  www.glosspresents.com .

CLCK HERE To read about the mission statement of Cecil Russell’s POSE Winter Party as well as the categories and criteria for those walking in the runnway show.