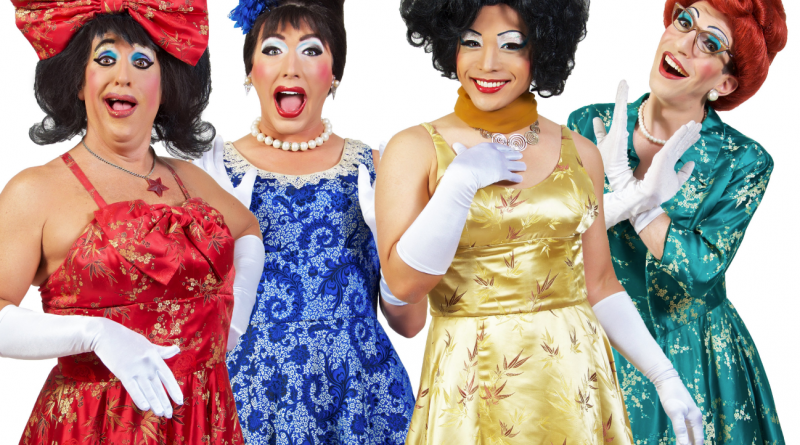 For 25 years, The Kinsey Sicks, America’s Favorite Dragapella® Beautyshop Quartet, has served up a feast of music and comedy to audiences at performing arts centers, music venues, and comedy festivals in every kind of town you can imagine!
After an Off-Broadway show, an extended run in Las Vegas, 9 albums and 21 music videos/films, their award-winning a cappella singing, sharp satire, and over-the-top drag have earned The Kinsey Sicks a diverse and devoted following. And now, Ben Schatz (Rachel), Jeff Manabat (Trixie), Spencer Brown (Trampolina) and Nathan Marken (Winnie) are on a new tour in celebration of their 25th Anniversary with Things You Shouldn’t Say coming to San Francisco October 5 & 6 at the Marines’ Memorial Theatre.

They have come a long way, baby, since their first public performance as a quintet on a street corner in San Francisco’s Castro District in the summer of 1994, but the consistent things throughout the years with their shows’ music parodies and political satire that audiences leave with are being thoroughly wowed, entertained, learned, reminded and energized. Things You Shouldn’t Say show is a remarkable true story of four friends from San Francisco who had a life-changing experience at a Bette Midler concert that led them to form The Kinsey Sicks. On the era of Trumpism, they’re sharing their hilarious, inspiring and at times heartbreaking tale, and showing that hate and deceit can be fought with humor and heart. “ I feel the show gives us, not a way out, but a way through. Drag is not just a pop culture sensation, it is also a way we can change the world we live in and make it something we deserve,” says 14 year member Manabat (Trixie).

I’m no stranger to The Kinsey Sicks, and it is always a pleasure to sit down for chat with them as I did recently with Jeff, Spencer and Nathan to talk about this Silver Anniversary, the touring show, the retirement of another member, their impact and RuPaul’s Drag Race.

BEBE: Since San Francisco is where it all began for Kinsey Sicks, as the group tours the country year after year, coming back to San Francisco during the tours is a given. But, this return in October is a bit special because it marks 25 years since the beginning here. Did 25 years creep up on you, or has this been an anticipated event for some time now?

JEFF (Trixie): I think we have been contemplating what the 25th Anniversary show was going to look like even 3 years ago. When the 20th Anniversary past, that was a humongous milestone. Who knew that four drag queens, singing in 4-part harmony, would last 20 years. We did that the Castro Theater and it was amazing! Then we suddenly realized 25 is happening, and in some ways is a greater milestone. And we wanted to do a show that would reflect our incomparable experience.

BEBE: The title of this show “Things You Shouldn’t Say” really sums up your 25 years. You have made a living by being politically incorrect during such PC times. But, the Kinsey Sicks and its shows over the 25 years have provided much to the LGBTQ+ community and beyond. What are those provisions? What is it that continues to make Kinsey Sicks popular and successful?

JEFF (Trixie): I think it looks back at, not just the history of the group, it looks at the history of the group in the context of the greater LGBTQ+ community. And it connects the community also to the history of America and our constant struggles to find equality for people who are oppressed,  or underserved, or underrepresented. When were first formulating this show, it was first going to be a simple retrospective of the group itself. Then the 2016 elections happened and it forced us to reassess what the show could be. Then, (the show) became more connected to the events of the world, country, politics, and our community. Once it was put out there, we realized this is something special. People need to hear an experienced voice speaking to what was happening to the world right now. There’s a lot of anger, rage happening and there is a way in which our show is able to channel that rage into something beautiful, and help people either come to terms with what is happening or relate to what’s happening and feel energized in a way to help us push forward thru what is happening with our current awful political situation. It’s been throughout our 25 years that the struggles continued. We are not yet in the best place and we must continue. And, (The Kinsey Sicks) is a part of that continuance.

BEBE: Spencer, though there have been several group member changes over the years, your character, Trampolina, is the only Kinsey created from the existence of another character, Vaselina.

SPENCER (Trampolina):  Jerry Friedman was the originator of Vaselina, and when he passed away, rather than keeping the same character’s name, as a tribute to his memory, (we) decide to create the character Trampolina, Vaselina’s “illegible” daughter. There was a period of time where Vaselina and Trampolina coexisted. There was a period when Jerry’s reliability to perform was questionable, and  Trampolina came into the group with the addition of Chris Dilley, as Jerry’s understudy.

BEBE: What was the original intent with the formation of The Kinsey Sicks, briefly a 5 member group?

NATHAN (Winnie): While out having a good time at a Bette Midler concert dressed as the Andrew Sisters, someone came up and said they were having an event and asked if (the original members) wanted to sing at it. They said they really didn’t sing, but they didn’t realize how wrong they were until after the Bette experience. They thought, hey we CAN sing and we’re pretty funny, so they decided to have a go at it. It became its own animal and entity. Before they knew it they had a phenomenon on their hands. What’s remarkable is it continues to be a phenomenon, because you’ve probably not seen anything like The Kinsey Sicks.

They found that the community having been so decimated in the 15 years that came before The Kinsey Sicks that the community needed to laugh. The community needed to hear stories of itself. A lot of the early songs reflected that. Songs about AZT, and songs that reflected what the queer experience was like at that time. Yes, we have songs that will make you think, but we have hysterically fun songs too. They discovered there was a market for that.

BEBE: There have been numerous personnel changes within The Kinsey Sicks over the 25 years leaving only one original member currently. What have these changes meant over the years as it relates to The Kinsey Sicks staying relevant and reflecting our LGBTQ+ current experiences?

SPENCER (Trampolina): There’s always talk about the generational gap between parents and their kids, but The Kinsey Sicks have bridged the gap between LGBTQ+ community from then to now. The thing the group has done over time is we sit with the culture and adapt to what we’re seeing put out there by the media and social media in the world. We address that and talk about it. So in this Things We Shouldn’t Say show, Ben (Rachel)  reflects on his career as a lawyer living through the AIDS crisis in the 80s and 90s. A lot of people my age and younger don’t understand that. Is there a history class being taught about this? There isn’t. It doesn’t matter if you’re gay or not, the AIDS crisis is a very important part of American history about how the government handled that. Being able to address this as a young person and having young people hear it is really meaningful. As our group has shifted in membership, we have all brought different things to the table in what we see, what we hear, and what people are talking about and that’s kind of what keeps our group fresh. Like in this show we do a (new) medley of TV theme songs that are parodies of Addams Family, the Brady Bunch and Green Acres that is all about Trump in the White House. These songs are from the 60s but we are singing about today’s Trump family. There’s nothing more finger on the pulse than that number.

BEBE: RuPaul’s Drag Race recently celebrated a milestone with its 10th season, and with the shows influence on the drag culture, many people have commented on the changes occurring, good and bad, in today’s drag culture. Any thoughts on this perceived change in drag, and how it may affect Kinsey Sicks moving forward beyond this 25th anniversary?

NATHAN (Winnie): We can tell you we won’t be lip syncing for our lives anytime soon. But, our Super Power is that we sing, and not only do we sing, but we sing in 4-part harmony. When people see the show, they go ‘Wow, that’s incredible’. Drag Race has definitely changed what the expectations are, and we continue to divert that by doing what we do, and by talking about political stuff. There are  drag queens who do make political statements. Bob the Drag Queen has a history of being an activist, and that’s commendable, but that’s not what Bob leads in with when she makes his entrance on his season. It’s in the bio, but she doesn’t lead with that. We do.

JEFF (Trixie): I do love that Drag Race become such a cultural phenomenon. Before Drag Race, drag was still on the fringes. But today because of Drag Race, I feel there are straight people into this show and don’t have the same judgements about drag anymore. There are young people who are seeing drag and being exposed to it and it’s not this big mystery to see men in dresses looking femtastic, or looking other worldly, or looking fabulous. But, is that a little monolithic? I think when people see us they might have a different expectation, but when they hear us sing in 4-part harmony and hear we have something to say, it’s different. I think people have space in their minds to see more different kinds of drag. And that’s wonderful. The (awareness) comes because of the great big thing (Drag Race), now there’s space to see more. I love that.

BEBE: This 25th Anniversary show Things You Shouldn’t Say also marks the swan song tour for The Kinsey Sicks’ last original member Ben Schatz who portrays Rachel. I’m sure your fans are wondering about the Rachel character. Nathan came in to play Winnie when Irwin Keller retired in that role 4 years ago. Will there be a search for another person to play Rachel?

NATHAN (Winnie): A couple of years ago we did a Nationwide search to be prepared to replace Rachel. Last year we contracted and started working with a wonderful actor based on the East Coast, and we decided to birth a new character that will play the ilk of Rachel, though will not be named Rachel.

JEFF (Trixie): The new (character) will have a lot of the same qualities as Rachel. Rachel as a character has a perceptional, powerful presence in, not just in the Kinsey Sicks, but in the community. Rachel has a particular way of saying things that should not be lost when Ben retires.

The Kinsey Sicks in their 25th Anniversary Show Things You Shouldn’t Say lead the audience in resisting these dark times with laughter and integrity in an unforgettable new musical exploring Trumpism, racism, AIDS, extreme macramé, oblong veggies and Bette.