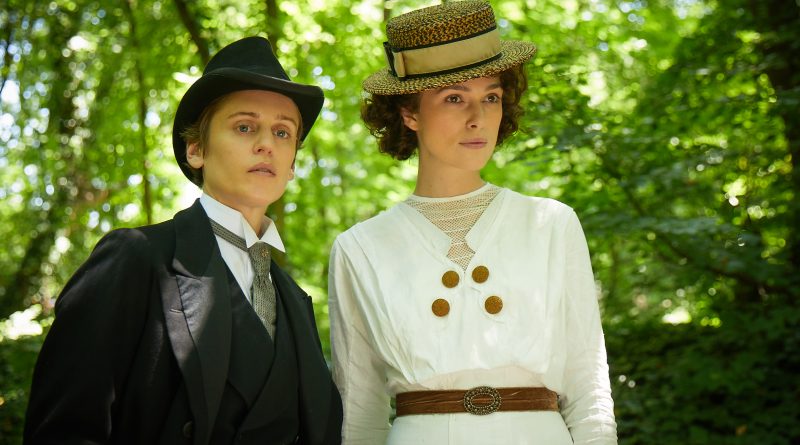 ‘Colette’ actress on playing bisexual author Colette, making a lesbian sequel to “Bend It Like Beckham” and her drag-inspired Sugar Plum Fairy

You know what’s to love, actually? How Keira Knightley has now played enough feminist roles to know her character, Juliet, in the bubbly holiday classic “Love Actually” doesn’t exactly fall into that category. In the Christmas rom-com, Juliet is the object of not one but two men’s desire, and copious close-up shots insist on telling us what we’ve already known: Keira Knightley is breathtakingly beautiful.

The 33-year-old actress was just 17 when 2003’s “Love Actually” was filmed. Since then, Knightley’s genre-spanning roles throughout her 23-year career have often positioned her as a heroine in girl-power period films, women characterized by their liberated state of mind (2008’s “The Duchess”) and patriarchal-defying genius (2014’s “The Imitation Game”, as Alan Turing’s mathematician-fiancée Joan Clarke). Real-life bisexual novelist Sidonie-Gabrielle Colette, who ghost-wrote for author-husband Henry Gauthier-Villars (known as “Willy” and played by Dominic West) until she reclaimed her autonomy “and” byline, is right within Knightley’s wheelhouse of women smearing their male oppressors. Take Colette, whose 1944 book “Gigi” was adapted into a movie musical that won nine Oscars in 1959, including best picture.

Written and directed by out director and fellow Englander Wash Westmoreland (“Still Alice”), “Colette” is a tribute to his late husband and collaborator, Richard Glatzer, who died from the progressive neurodegenerative disease ALS. In the hospital before he passed away in 2015, Glatzer, who could not speak, typed “C-O-L-E-T-T-E” to Westmoreland on an iPad to communicate that his – but in many ways, “their” – next project should be “Colette.”

Recently, Knightley called to talk about her special connection to gay directors such as Westmoreland (and James Kent, who directs her in the forthcoming “The Aftermath”), her enthusiastic response to a “Bend It Like Beckham” sequel where best friends Jules and Jesse are lesbian lovers, and her desperate plea to drag queens.

You’re so good in this I wouldn’t be mad if all you do is play period bisexuals for the rest of your career.

Well, thank you very much! I’ll quote you on that.

Is there a special relationship between gay directors and female actors such as yourself that helps in telling a story like this one?

When it comes to the male gaze, is there a difference in having a gay director direct a sex scene?

Yes and no. He did actually turn around when I think it was me and Eleanor (Tomlinson, who portrays bisexual American heiress Georgie Raoul‑Duval) and he was like, “You know, it’s really great ’cause there’s no male gaze here,” and I’m like, “Wash, there are “only” men in this room!” (Laughs) He’s like, “Yes, no – you know what I mean!” (Laughs) So yes, because sex is sort of taken out of it in a way, because obviously he doesn’t find me attractive, and that’s great (laughs). But I still think male sexuality in all of its forms is probably slightly different from female sexuality, so there are probably still subtle differences. But it “is” very nice to know that when I took my clothes off he didn’t get off on it at all.

Are there any other films you’ve worked on where you felt having a gay director helped in doing the story justice?

Yes. I worked with… oh my god… my brain’s just literally gone blank and I’ve forgotten every single other person’s name that I’ve ever worked with before. Wait, what the fuck? He directed “Aftermath”. I can see his face. Oh my god, this is really annoying because literally I just spent eight weeks with him and he’s the loveliest man in the entire world.

But I don’t know whether it’s sexuality that does it or just – I think it’s the individual. Possibly gay men, because of their fight for their identity and to be accepted and accepting of themselves, understand that there’s a level of emotional intelligence, which often – not always – a heterosexual man will simply try to shut down. So I think that helps if you’re dealing with emotions, which you are when you’re making a film. It helps to have an emotional vocabulary and intelligence and openness. And look, I’m a heterosexual woman, so maybe I’m completely talking out of turn, but I do feel, because there is still a process of acceptance that gay men go through, that emotionally they can be very, very intelligent and open and accepting.

Did Colette’s approach to sexuality speak to you in any profound or personal way?

Yes, because she was entirely natural to herself and she acted without shame. What a wonderful, positive way of looking at your sexuality and the people that you fall in love with. I really respected that about her. I loved that she was herself and that any rule that didn’t fit she just broke and made the life that she wanted to live. I think that’s a wonderful, empowering story, both from a feminist point of view and from the point of view of her sexuality.

Speaking of feminism, I have a feeling Colette wouldn’t love your character in “Love Actually”.

The men in that movie seem to have all the power, while your character is silent, cute; lots of close-ups of you looking pretty. How do you reflect on that role and what it says about women?

I hadn’t really until you just said that! But yes, I can see that. I was 17 when I played that one and I was so excited about just getting a role in a Richard Curtis film. You know, I think there were some pretty good strong women in that. Not “that” one, but the Martine McCutcheon character and the Emma Thompson character, which is so heartbreaking. I don’t know. I’d have to look at it again with that frame of my mind. I do, however, know Scarlett Curtis, who is Richard Curtis’ daughter and a radical-feminist activist, so he’s done something right there.

As for Emma Thompson, she sobs to Joni Mitchell. And her story doesn’t have the happiest or even most empowered of endings.

But strong people are allowed to break down; it doesn’t mean you don’t have emotions. You just have to then pick yourself up and stand up again. See, the problem is, I haven’t actually seen it since it came out, which was over 10 years ago, so actually I don’t remember quite enough to be able to argue either way. You really, really know it, so I feel like I’m just gonna have to go with whatever you say. (Laughs)

You played gay computer scientist Alan Turing’s fiancée in “Imitation Game”. Have you ever fallen in love with a gay man before?

No, luckily. I feel very fortunate in that, ’cause that would be tricky!

Rumor has it that “Bend It Like Beckham” was originally written as a lesbian love story?

A lot of people in the LGBTQ community wanted Jess and Jules to be a couple in the end.

You’ve worn some fabulous period wigs over the years – is that your real hair in “Colette”?

No, I don’t think so. I think we had wigs, always through. Because there were so many different styles, and short, long. I think when it’s long we used some of my hair with some extensions, and then when it was short, it was a wig.

Do you realize how many drag queens are gonna be jealous of the one you wear in your role as the Sugar Plum Fairy in your forthcoming film “The Nutcracker and the Four Realms”?

Oh, dude, yes. Hell yes. You know, we actually designed it with them in mind. I was so pleased. It was my first time where I could actually be like a drag queen, and I was so excited. We were all talking about it at the time; we were like, “Come on, this is the most amazing drag outfit,” and honestly, I was really excited because normally you have to be so subtle in films and I got these really long, fake eyelashes – I can’t remember whether we used them – but with bits of glitter over them, and we were all like, “This is perfect drag queen attire.” It was so amazing, and I think there are some amazing drag queens out there who are gonna wear it even better than I did. I hope that this film inspires some amazing costumes.

You sound like you could be an avid watcher of “RuPaul’s Drag Race”.

Everybody’s a fan! Yeah, there’s a bit of “Drag Race” watching. And then there’s a great drag night in East London, which I used to go to when I could go out before I had a child, which was always fun. So can I just put that out there: Please, please let there be a drag queen somewhere who will be in a Sugar Plum Fairy outfit.

As a teenager, you were told your kiss with a gay female friend you went to prom with wasn’t appropriate. What did that experience teach you about LGBTQ discrimination, and how did it influence you as an ally for the community?

I thought it was bullshit at the time. Bullshit… bullshit! Our picture was not put up (on the event’s photo wall) because it was deemed not appropriate. I’m not sure it was that particular experience that influenced me; I just remember thinking that was stupid and I think I’ve thought that – always along the line – any discrimination against people because of their sexuality has been utterly ridiculous. It was the way I was brought up, and so I’ve never questioned gay rights. So yes, that was one of them; but no, I don’t think that was my sort of awakening. I’ve always had family with many gay friends, and people in the LGBTQ community have always been around me all my life and have been wonderful friends.