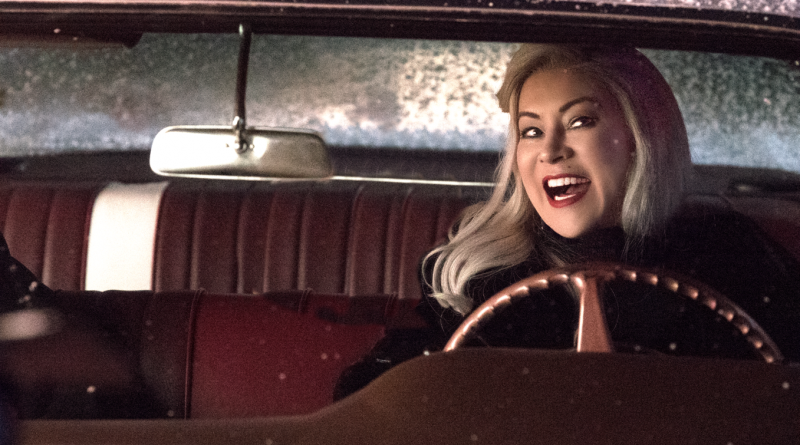 Chucky, with his fiery red hair and frighteningly loyal pledge to be “your friend till the end,” was never gay by design. But in 1998, four films into the _Child’s Play_ franchise, the undying slasher flicks centered on a ghastly ’80s-era talking doll took a campy, gay turn with the sequel _Bride of Chucky_.

We have out Chucky creator Don Mancini to hail for the queering of Chucky, who fathered a gender-fluid child named Glen / Glenda with goth-turned-glam lady doll Tiffany Valentine in 2004’s _Seed of Chucky_, notably featuring filth king John Waters and a Britney Spears look-alike (Chucky’s reaction to running her off the road? “Oops, I did it again”).

Doubling as Tiffany and herself is lesbian fave and voice of the plastic assassin Jennifer Tilly, who returns for the Good Guy doll’s seventh film, _Cult of Chucky_, to wreak havoc on the patients and staff at a mental institution, among them a gay nurse named Carlos (Zak Santiago). Chucky is scary again, as _Cult_ begins where his reentry into straight-up, decamped horror via 2013’s _Curse of Chucky_ left off.

Tilly, gay-adored star of screen and stage (and also an Oscar nominee for her memorable role in Woody Allen’s 1994 black comedy _Bullets Over Broadway_), spoke with her trademark kid-like cadence about the extreme gayness of the Chucky movie and the latest film’s clever homages to her groundbreaking lesbian classic _Bound_. The star looked back on that 1996 landmark movie in LGBT cinema, reflecting on how she and onscreen lover, co-star Gina Gershon, helped each other look flawless on camera and why she thinks sibling filmmaking power duo, Lily and Lana Wachowski, before they came out as male-to-female, created one of the most iconic lesbian love stories.

I haven’t seen the first three – I shouldn’t say that! – but _Bride of Chucky_ was the first time (Don) had a positive gay character, which is my best friend (in the movie). Then, _Seed of Chucky_, obviously, was really balls to the wall. But Don created the Chucky movies, and he’s gay himself and definitely has that sensibility. Also, _Seed of Chucky_ had the first transgender kid doll in the history of movies, which was Glen / Glenda, who was, I guess you could say, gender confused. And there are always positive gay characters in the Chucky movies and there’s also Jennifer Tilly / Tiffany, this sort of drag queen-y gay icon.

_Seed of Chucky_: ahead of its time

It really was, but we didn’t really think of it much that way. But in gay and lesbian parades, there was a lot of chatting about Glen / Glenda, and then we realized that it was. _Seed of Chucky_ was where Don Mancini delightedly threw everything in that we ever loved in the movies, including John Waters. It was really the campiest movie ever.

Actually, Universal said, “It’s too funny, it’s too gay, and there’s too much Jennifer Tilly.” How could there ever be too much Jennifer Tilly? (Laughs) They said that about the first draft of the script, though. But Don just basically had a carnival of fun with that movie. I mean, even at the end of the movie with the kids’ birthday party, it’s very reminiscent of _Mommie Dearest_. My character turned into, like, Joan Crawford.

Tilly’s kiss with actress Fiona Dourif in _Cult of Chucky_

Don called me up and he goes, “I’m very excited. I wrote you a new part in the new Chucky movie. You’re gonna be very excited. And you’re hot in the movie! I wrote you a hot scene!” At this point in my life I literally am going out for the parts of grandmas, so I was like, “Ohh, ‘hot’ – I kind of like that idea!” Then I got the script and thought it was absolutely genius. You know, Don is a huge fan of _Bound_, so it’s a bit of an homage to _Bound_, especially how they drive off together.

It was deliberate, you know. And he actually made some _Bound_ references in _Seed of Chucky_ also. I think Fiona Dourif is a brilliant actress… and she’s really hot! (Laughs) But the funny thing is, when (Fiona) came out of that building and she was possessed by Chucky, she looked like her dad (Brad Dourif, who has voiced Chucky since the original _Child’s Play_ in 1988) and she looked like Chucky the way she was walking and moving and everything. And it was even hotter than the feminine Fiona Dourif! Fiona Dourif as a man trapped in a woman’s body – got a little bit of transgender, gender-fluid energy going on there.

Don wanted Tiffany more like Tippi Hedren in this movie. She wants to be a movie star like Cate Blanchett in _Carol_, all elegant and vintage. He thinks these things out! Like, who sits at night and thinks, “What does a plastic doll that has gone into a movie star’s body want?” These are the questions that keep him awake at night.

Looking ahead to the next (maybe lesbian-ish) Chucky movie

I’m really excited, and I hope less time elapses between this one and the next. I have no idea where this is going, but I’m just really happy that I drove off with Fiona because I’m pretty sure I’ll be in the next movie. I really hope that when we make the next one I’ll still be hot enough to have some hot sex with Fiona – that’s what we all live for!

_Bound_ to Corky: challenging the Wachowskis for the role

When I went and auditioned for _Bound_ I really wanted the part of Corky. I did not want the part of Violet. When I came in and read for it, I read for Corky. Linda Hamilton was set to play Violet, so Corky was the only part available. I was like, “Ohh, Linda Hamilton! I’d love to work with Linda Hamilton!” But then she fell out and Violet was available and the Wachowskis were like, “What about Jennifer for Violet?” I wanted to be the badass and the Wachowskis got upset. They were like, “All the girls want to play Corky! Violet is the better part.”

So we found this girl, Gina Gershon. I hadn’t heard of her. She was in _Showgirls_, but it hadn’t come out yet. But they were like, “We think you guys would be great together.” And they’re brilliant filmmakers – they really are – and I was in Canada filming a movie. I said, “Don’t even bother to come out if you’re gonna try to talk me into playing Violet. I only wanna play Corky,” and they’re like, “Well, we think you guys would be good together. She wants to play Corky, but she says she’s open to playing either.” But they were just really being master manipulators.

She came out and right away I was annoyed because apparently nobody had told her she was gonna be playing Violet, and she just started talking about how she was gonna do Corky and how she already got her ears pierced. I was like, “Oh my god, this girl is really eager to take this role.” (Laughs) I was thinking that I was gonna play Corky, but then when I met her we got along so well on the set. We had such a good time, and we’d sit in our trailer and we’d make the craft service person go and get donuts. We’d torture, torment.

_Bound_ sex scene with Gina Gershon: ‘Cover up the cellulite on my thigh’

With the sex scene, it was really fantastic because with a guy you’re always kind of trying to show off your tits and bits to your best advantage. But with a girl, we’d be like, “Oh, can you put your hand here to cover up the cellulite on my thigh?” or “Can you prop my breast up a little bit to make it look plumper?” And the thing about Gina is, she’s very generous. She never ever says a bad word about any of her co-stars or any of the movies she’s done, so if I had been working with someone who maybe was more difficult, it would’ve been a nightmare working so closely with her, so to speak, like totally nude.

But we just had so many laughs, like when we were doing that sex scene we were laughing so much the Wachowskis were like, “Girls, girls! Settle down! We’re making a movie here!” But it was a great thing. It kind of makes sense now, because (at the time) everybody said, “How can two men write such great parts for women and be sensitive and compassionate about the way women think?” And after the movie was over, their mom was leaving the screening and she was saying, “Wow, that’s such a beautiful love story between the two women,” and then the Wachowskis went off and became female after that.

So, I really do think _Bound_ – those were two of the greatest roles for women ever and the characters were really fantastic. I think that the Wachowskis had that sensibility right from the beginning. But we never thought – they were both very alpha males and brilliant, brilliant men who knew what drives people, and they were able to write such a sensitive, compassionate story about women.

It really is the classic film noir too. I never saw it as a sexploitation movie; I saw it as a beautiful example of film noir. It didn’t really give me much pause playing a woman in a love scene with another woman, even though at that time – people don’t remember, because every indie film has, like, women kissing women now, but back then it was a thing that you only saw in, like, _Red Shoe Diaries_, or another sort of weirdly soft-porn thing. And now, it’s sort of a given in film.

I’m always really happy when people come up to me and they say – a lot of women say, “That movie made me come out of the closet.” You know, originally the Wachowskis did _Matrix_ at Warner Bros. and Warner Bros. said they would give them $15 or $20 million to make the movie, but they would have to make Corky a man. They said, “But Corky is a woman.”

They were just determined to make Corky and Violet running from the mob, and they ended up at (late film producer) Dino De Laurentiis’s studio and they were really nervous because they’d been rejected a lot and they go, “It’s a story about this girl Corky – she gets out of the prison and she meets this girl Violet and she falls in love,” and Dino goes, “Wait a minute, wait a minute. Violet is a girl and Corky – she’s also a girl?” And the Wachowskis go, “Mmhmm.” And he goes, “I love it! I’ll give you $3 million!” He was really great and supportive of the film, and Aaron Spelling was the co-producer. Aaron was the one who sent out all the copies for Oscar consideration because the studio couldn’t afford to do that, or didn’t want to.

So, it’s really kind of amazing. You would never think that Aaron Spelling and Dino De Laurentiis would get together to create one of the seminal films in gay and lesbian cinematic history, but they did, like strange bedfellows.