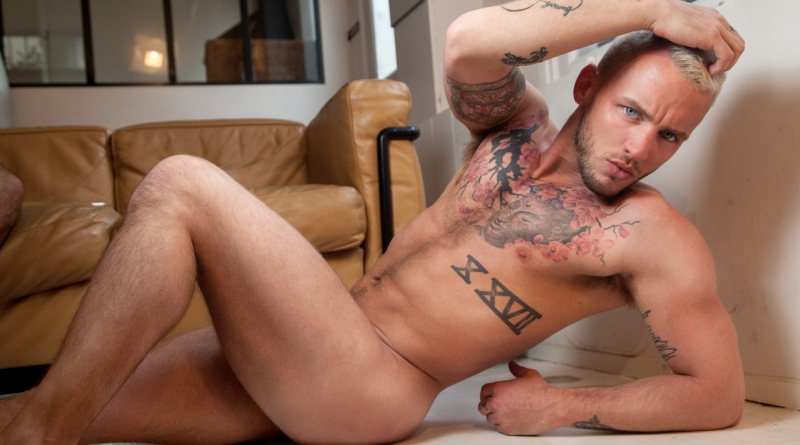 On The Cover
December 6, 2017 Gloss Magazine

SISTER ROMA – My first trip to Paris was in October 2016 to host the PinkX Gay Porn Awards. The day I landed I went straight to my hotel room to get in face for an interview with CANAL+, the premiere cable television station in France. After filming that night, I remained in drag and we all went out to dinner. As I walked through the Place de la République, my feather boa dancing in the cool, crisp air I instantly felt at home. I turned to my best friend Shante and I said, “I could live here.” The next few days were a whirlwind of touristy must-sees – The Eiffel Tower, the Louvre, L’arc de Triomphe – and I came home. I fell in love with Paris, but the trip was far to hectic, far too short, and I knew would be back.

Little did I know that I would return less than one year later with my NakedSword family Tim Valenti, mr. Pam, Leo Forte, Jessie Garcia, and an all-star cast to film our latest blockbuster Paris Perfect. Believe it or not, despite my illustrious career in adult entertainment, I can count the number of adult films I’ve appeared in on one hand. That’s why I was so excited when mr. Pam worked me into the script, in a pivotal onscreen moment with my beloved Johnny V. to be filmed in front of the Eiffel Tower. Does it get any better than that? The answer is no. No, it does not.

Nearly the entire cast was present for the shoot that day including Colton Grey, Theo Ford, Dani Robles, and Denis Vega along with crew. The boys were kissing, Johnny and I were (over)acting, and it was quite a circus. There were a lot of onlookers and a few obstacles, but I must admit I’m very happy with my cameo! I’m not saying I was FLAWLESS in my role as the “Helpful American Drag Queen Tourist,” but I do expect a nomination for “Best Non-Sexual Role” in the ensuing Award Season. Honestly, it’s not just my performance that makes Paris Perfect one of my favorite XXX Gay Movies of all time. It’s the storyline, the acting, the location, the editing, the filmography, the direction… all of it is truly epic.

This trip was more relaxing than my previous trip to Paris. I had plenty of opportunities to wander the streets; I even got a French haircut at a local barber (which was remarkably similar to my usual American haircut.) Tim (NakedSword Executive Producer) and I did a lot of shopping and sightseeing. We attended the Dior exhibit, toured Notre Dame, and visited our favorite restaurants and bars in the legendary tres-gay Marais. I went fetish-drag shopping with the boys and even ventured into the dark recesses of Le Depot until the wee hours of the morning! On our last night, mr. Pam, Johnny, Leo and I went to the Moulin Rouge. It had been a while since I’ve seen an over-the-top live topless extravaganza like that! It was the perfect way to say au revoir to the City of Light.

One of the highlights of the trip was getting closer to Paris Perfect star Colton Grey. Like most of you I’ve always been enamored with his thick lips, tattoos, perfect body, and of course those legendary eyes. After spending a week with him I learned that he’s even more sweet and beautiful on the inside. I sat down with my new friend to ask him a couple questions about our trip. Here is what he had to say:

Was this your first time in Paris? What did you think of the city, is Paris Perfect?

COLTON GREY – Yes! It was my first time in Paris and I fell so in love with the city. It’s beautiful and you are surrounded by so much history and culture, it’s incredible. The food is perfect, The architecture is perfect, the coffee is perfect, and especially the MEN! The men are perfect, Paris really is perfect!

It’s always so exciting to film out of the country. The production is taken to the next level and you really get to immerse yourself in something totally different – it definitely translates in this film!

How did people react to seeing you make out with other guys on camera at the Louvre? Were you nervous?

Oh my gosh I was a nervous wreck! We attracted such a big crowd! The cops ended up coming up to us to see what was happening and tried to stop us from filming! We told them that I was directing a student film and that mr. Pam was my friend just helping to film! It was so crazy! Luckily, I was kissing some of the most beautiful men so that definitely calmed my nerves.

You’re such a great actor! In the movie you play your own doppelgänger and his favorite food is escargot. Did you eat snails?

I did! I Had escargot for the first time ever! It wasn’t bad. Not my favorite thing ever, but I was open to trying all types of new things while I was there.

Did you have any other “first time” experiences in Paris?

I had a bunch! A lot really had to do with trying new, weird types of food that I’d never had before. I was able to check a lot of things off my bucket list I’d never thought I’d be able to do! Seeing the Mona Lisa was awesome!

Other than me (laughs), who is your favorite person in the cast?

No one. ONLY YOU! But seriously the whole cast was so incredible. We all got along so well, and it was really awesome sharing 2 weeks together in Paris.

Other than me, who did you want to have sex with that you didn’t get to?

I really got to have sex with everyone I wanted to lol.

You were a star in NakedSword’s Secrets & Lies which won BEST PICTURE of 2017. Do you think we have another winner here? What makes Paris Perfect so special?

Yes, yes, yes! Everyone that worked on this project was so dedicated. We worked long days into night time and time again, but everyone just stayed in good spirits. We were all committed to really making something… PERFECT.